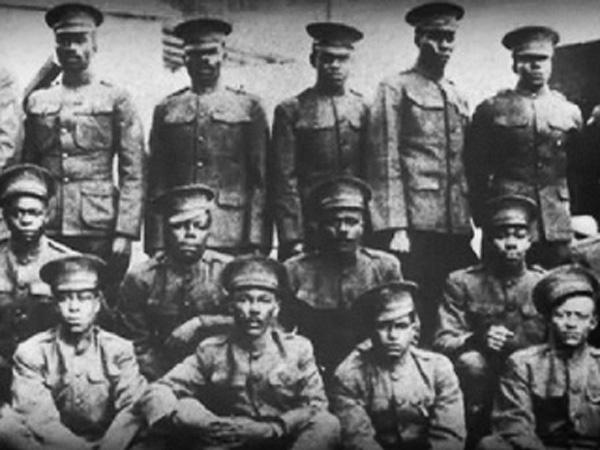 December 11, 1917: At five in the morning, 13 Black soldiers are taken from the barracks at a military camp near San Antonio, Texas, and marched to the gallows. Each is placed on a chair, noose slipped over his head. Simultaneously, the chairs are kicked out and the soldiers drop to their death. Buried in graves nearby, the markers are not their names, just numbers 1 through 13.

Each, to the end, proclaimed his innocence.

The events leading to the hanging began five months earlier. On July 27, 1917, the U.S. Army ordered the Third Battalion of the all-Black 24th Infantry Regiment to move from New Mexico to Houston to guard Camp Logan, which was under construction.

The regiment originally consisted of Black cavalry units formed in 1866. Made up of former slaves who had fought in the Union army during the Civil War, they were sent west to slaughter Native Americans, who called them Buffalo Soldiers. In 1916, they had been sent to Mexico as part of General Pershing’s forces who were trying, unsuccessfully, to hunt down the revolutionary leader Pancho Villa. They were disappointed when they were not chosen to fight in Europe after the U.S. entered World War 1 earlier in 1917. But they continued to think that their patriotic service at home would result in some semblance of civility towards them from whites. But as events in Houston were to show, they were gravely mistaken.

At Camp Logan, white construction workers taunted the soldiers and demanded separate tanks of drinking water. In Houston itself, the soldiers encountered at almost every turn the overtly racist, degrading Jim Crow segregation pervading the Deep South. They were infuriated by the “whites only” signs, the verbal abuse by whites, and trolley conductors demanding they sit in the rear. Some refused, leading to clashes with the police.

Early afternoon, August 23, 100 years ago last month: Two white Houston cops break up a craps game in a predominantly Black neighborhood, and one, searching for a “fleeing suspect,” enters the house of Sara Travers. No “suspect” there, but he drags Travers outside in her nightgown, as her five children look on. Seeing this, Private Alonso Edwards of the Third Battalion offers to take custody of Travers, but the cop pistol-whips and arrests him.

Later that afternoon, the battalion’s Corporal Charles Baltimore goes to the police station to ask about Travers. There, Baltimore is beaten, flees, is shot at three times, captured, beaten again, and arrested. Baltimore is later released, but soldiers at the camp hear he’s been shot and killed.

Night, August 23: Fearing trouble from the seething soldiers, one of the battalion’s white officers revokes all passes for the evening, orders the men to assemble without arms, and warns them not to take the law into their own hands. One of the men, who has smuggled his rifle into the formation, fires it and yells that a white mob is approaching the camp. The soldiers break formation, race to the supply tents to grab rifles and ammunition, and 156 of them begin marching toward Houston.

When the soldiers reached the city, they fought white police and local residents in pitched gun battles. When the fighting ended, four Black soldiers, five white cops, and 12 white civilians were dead. The day after the rebellion, martial law was declared in Houston.

Sixty-three soldiers were charged with disobeying orders, mutiny, murder, and aggravated assault. At the court-martial, they were defended by only one person, who taught law at West Point but was not a lawyer and had no trial experience. Nearly 200 testified for the prosecution at the 22-day trial, but almost none could identify any of the defendants, or distinguish among them, because the rebellion had occurred at night during heavy rain. 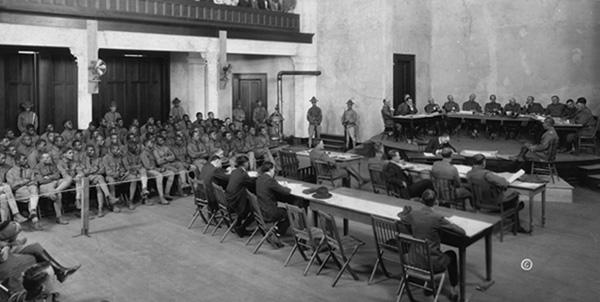 The court martial of 64 members of the all-Black 24th Infantry was the largest murder trial in U.S. history. Credit: U.S. National Archives and Records Administration

At the three trials, no evidence was brought forth to prove the existence of a conspiracy, and in fact, having endured several weeks of racist Jim Crow laws, constant taunts, and police brutality, the soldiers had good reason to believe a mob attack was in the offing. Further, a little earlier in 1917, on July 2 and 3, a mob of white vigilantes in East St. Louis, Illinois, had burned hundreds of Black homes and beaten, shot, and lynched Black residents, with most historians estimating that at least 100 Black people were killed. The soldiers of the Third Battalion, who knew what had happened in East St. Louis, were well aware of what could happen in Houston.

But on November 28, 1917, a “prestigious” court consisting of three brigadier generals, seven full colonels, and three lieutenant colonels sentenced 13 of the Black soldiers to hang. Forty-one were given life sentences. Only five were acquitted.

The chiefs of the U.S. Army set up and presided over the three courts-martial which, given the lack of evidence against the accused, were nothing but kangaroo courts.

General John Ruckman was the Army’s point man for the three trials. After the 13 soldiers at the first court-martial were sentenced to hang, the court recommended clemency for one of them, but Ruckman refused to grant it. He then approved all the death, life imprisonment, and other sentences handed down at the other two trials.

President Woodrow Wilson: While Wilson deceitfully promised “democracy” and “self-determination” for the planet’s colonized people during World War 1, back at home he was an openly racist and outspoken defender of white supremacy who publicly upheld this legal mass lynching. Wilson mourned the deaths of white “innocent bystanders,” “peaceable disposed citizens of the City of Houston.” He claimed that the three trials were “properly constituted,” that “extraordinary precautions” had been taken to “insure the fairness of the trials,” and that the rights of the defendants had been “surrounded at every point” by the “safeguards” of “a humane administration of the law.” This, in face of the fact that no substantial evidence had been presented at any of the three trials. Wilson went on to affirm the death sentences of the six other soldiers because there was “plain evidence” that they had engaged in “shocking brutality.”

On August 31, 1918, only after coming under heavy public pressure, Wilson commuted the sentences of 10 of the 16 men still awaiting hanging, consigning them instead to life imprisonment. He did so, he declared, because the “lesson” of the “lawless riot” had already been “adequately pointed,” and he hoped this clemency would inspire Black soldiers “to further zeal and service to the country.”

The authorities responsible for the “legal lynching” of 19 Black soldiers and life imprisonment for many more claimed that the men had engaged in a conspiracy, that they manufactured fear of a white mob attack in order to justify a murderous rampage against the white cops and citizens of Houston.

The political power of the U.S. ruling class rests, most fundamentally, on its military, and these brutal mass hangings signaled that the military command would brook no disobedience, much less mutiny, no matter how justified, especially by Black soldiers. Far from being an instrument of social justice or transformation, the U.S. military reflects and reinforces the relations of exploitation and oppression America is based on—in this case the overt, legalized Jim Crow segregation and lynch mob racism in the South and the brutal and often murderous white supremacy that reigned in the North. The Black soldiers at Camp Logan frontally and militantly challenged both military discipline and Jim Crow segregation and white lynch mob rule—with arms.

Coming at a time of major social and economic transformations, a major migration of Black people from the South, and growing protests and demands by Black people for equality, the Camp Logan rebellion represented the worst fears of white Southerners and powers in the North as well: Black people taking up arms against their oppression. This was seen as requiring the most severe punishment, including 19 hangings, as a warning and lesson to Black people who would consider doing the same. One message: no matter what Black people do for “their country,” this system still considers them as less than fully human, with no rights white people are bound to respect. That was true then, and it remains true today. 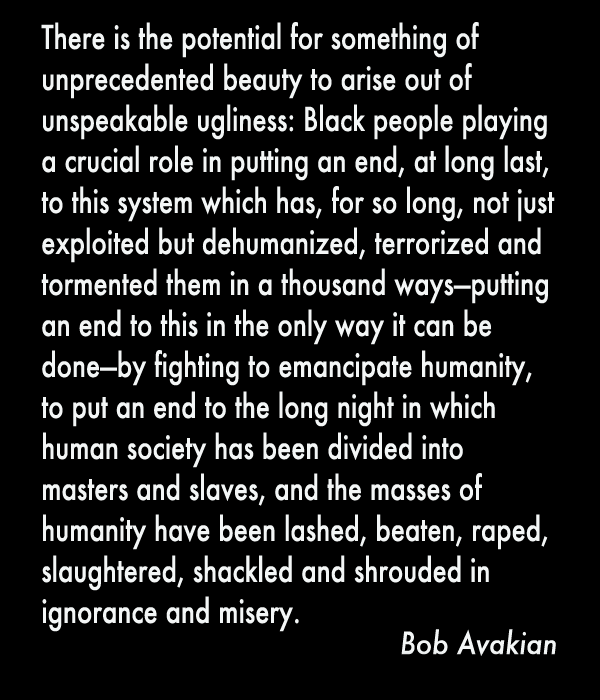