Editor’s note: Over the last several weeks, the Christian fundamentalist fanatic, misogynist, slavery-denying, Trump-loving Kanye West has gone full Nazi. In addition to wearing a white supremacist “White Lives Matter” shirt, blaming George Floyd for his own murder by police, and demonizing Black women for having abortions, Kanye has unleashed a torrent of lies and hatred against Jewish people. West rampaged over social media with this poison and then went on the fascist Tucker Carlson’s TV show, where he spewed more of it to Carlson’s evident approval (even as Carlson edited out the vilest of it before it aired).

Most recently, the “woke” conspiracy theorist, anti-scientific NBA superstar Kyrie Irving, who literally thinks the earth is flat, tweeted a link to a video, Hebrews to Negroes: Wake Up Black America, packed with poisonous anti-Jewish nonsense. These lies have been picked up and spread, not only by white MAGA fascists like the Nazis who dropped a banner over a freeway in LA saying “Kanye is right about the Jews,” but they have gained influence among a section of Black people, some of whom have welcomed and even spread Irving’s shit. In light of this, we want to reprint this essential point of orientation, first published at revcom.us in 2020.

When this was originally written, Trump was president. While Trump is no longer president, the anti-Semitism of the dominant Trumpian wing of the Republican Party has if anything gotten even more virulent and explicit. Likewise, the incidents referred to at the beginning of the article involving DeSean Jackson, Nick Cannon and others occurred at the time the article was written, in the summer of 2020. 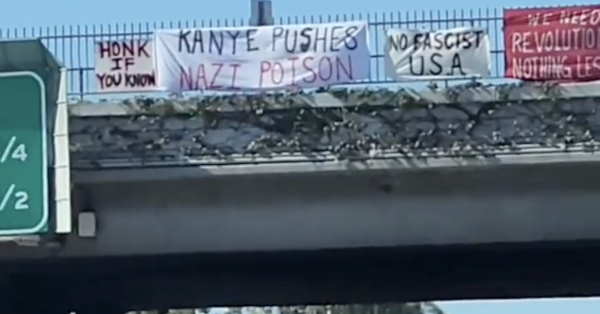 After Nazis dropped a banner on the 405 freeway in LA saying "Kanye is right about the Jews," The @revclub_la dropped these banners on the same freeway overpass.

In early July, a storm of controversy broke out prompted by a mix of social media posts, interview comments and statements by different Black athletes and entertainers including DeSean Jackson who plays for the Philadelphia Eagles in the NFL; comedian Nick Cannon; and former NBA player Stephen Jackson, who was a friend of George Floyd and has spoken out against his murder by police, and television and radio personality Charlamagne tha God.

DeSean Jackson reposted a quote attributed to Adolf Hitler which states Jews "will blackmail America. [They] will extort America, their plan for world domination won't work if the Negroes know who they were." In a podcast interview with “Professor Griff” formerly of the rap group Public Enemy, Cannon claimed that Black people are the true Hebrews, that Jews have usurped that identity and that “Jewish people, white people, Europeans…are a little less” and have a “deficiency.”

The day after DeSean Jackson’s post, the Chair of the Philadelphia Holocaust Memorial posted that he had a FaceTime call with DeSean who “apologized for his hurtful comments…” and had accepted an offer of “an education session … Confident we can turn this into a positive together.” Immediately after controversy broke out over his post, Cannon tweeted “First and foremost I extend my deepest and most sincere apologies to my Jewish sisters and brothers for the hurtful and divisive words that came out of my mouth.”

DeSean Jackson was suspended by the Eagles and Nick Cannon’s planned day time talk show was shelved, at least for now, by ViacomCBS. Cannon reacted to the canceling of his show saying ViacomCBS was "on the wrong side of history,” and added, "Systemic racism is what this world was built on and was the subject in which I was attempting to highlight in the recent clips that have been circulating from my podcast. If I have furthered the hate speech, I wholeheartedly apologize.”

Stephen Jackson insisted that DeSean Jackson was “speaking the truth.” Charlamagne tha God responded to the postponement of Cannon’s show claiming, “If there's one thing Jewish people have showed us, it's they have the power. I can't wait until the day black people are able to fire people for saying things about us that we deem racist. We can barely get cops fired for actually killing us!"

The boiling controversy has surfaced the question of anti-Semitism, including among those who are against the police murder of Black people. The following is an essential point of orientation towards this:

Anti-Semitism—views that in one way or another demonize and dehumanize the Jewish people as a people—has absolutely no truth or validity, should not be “up for debate,” and must be exposed for the reactionary poison that it is. Such views have led to or justified genocidal acts for several thousand years, including but not limited to the Nazi murder of many millions of Jewish people, and until very recently were “stock in trade” of most European ruling-class institutions, including the Catholic Church.

The “theory” of an international conspiracy of Jewish bankers who pull the strings on all governments and run everything has been extremely useful to all manner of vicious and oppressive regimes. The “virtue” of anti-Semitism to the various kings, czars, capitalists and imperialists and wanna-be oppressors that have promoted it is that it funnels the anger of people on the bottom of society, as well as the fear and insecurity of people in the middle classes, away from the system that is responsible for the condition of society, and towards an oppressed minority. And because many Jews (for a variety of historical reasons) are in visible sections of the middle or even upper classes—in the arts, in academia, in business and so on—and some are even part of the ruling capitalist class, anti-Semitism can present itself as “punching upwards” towards the “elites” and the “powerful”… while actually protecting the system as a whole and the class that runs it.

There is now a white supremacist, fascist in the White House fueling the resurgence of anti-Semitism, saying there were “good people” marching with the Nazis in Charlottesville. Those who today promote anti-Semitism—from Alex Jones to Louis Farrakhan to David Icke to ISIS, etc.—generally do so as part of a profoundly reactionary and often straight-up fascist discourse and program, and those views and programs must also be firmly opposed. As for oppressed people who fall for the lie that “the Jews” were responsible for the slave trade or today “control everything” behind the scenes: you are being played for fools and suckers, while the real enemy—the capitalist-imperialist system—is let off the hook. 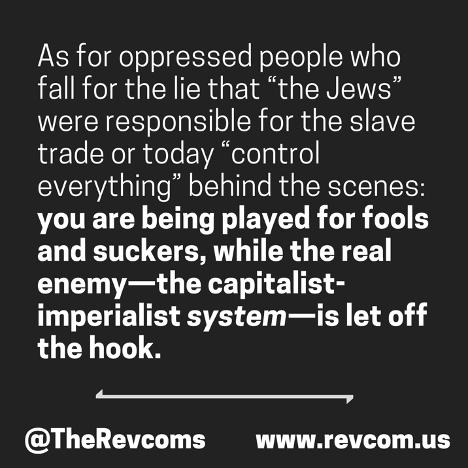