Three Points on This FASCIST Pandemic

First, this IS a FASCIST PANDEMIC!

From the second this pandemic was known, that bloated bag of fascist feces, Donald Trump and his whole fanatical fascist movement—in and out of government—have attacked and denied basic science. They held armed rallies and threatened state officials for taking safety measures to mitigate the spread. They pushed lunatic lies that the disease would just disappear on its own. They promoted dangerous drugs and crazy “cures” like drinking bleach or light beams.

They mentally drowned people in disinformation and wild, racist conspiracy theories and unleashed their foot soldiers to not only refuse to wear masks but violently attack people who asked them to.

Then, finally—through the extraordinary efforts of scientists and healthcare workers the world over—we got vaccines that are proven to be safe, proven to save lives, proven to put the brakes on the spread of this pandemic.

But to this day, these fascist lunatics defend refusing to get the vaccine or to wear a mask as a matter of their selfish individualistic “freedom”—no matter who it endangers or kills.

The fascist governors of Texas and Florida, Greg Abbott and Ron DeSantis, have even used the power of the state to bar and punish any local government or business or school system from being able to insist on mask-wearing in their own institutions and areas!

And just like everything else about these fascists, all this has white supremacy, misogyny, and xenophobia woven into and pulsing through it all. It is Black people, Native people, and Latinos; it is immigrants in detention and people in the prisons and those who make up the ranks of the essential workers who fill the grocery stores and meatpacking plants and Amazon warehouses and others who already lived on the desperate edge who have been among the hardest hit by this pandemic. And these fascists KNOW that.

Rand Paul, a sitting Republican Senator, knows that when he tells people to defy any mask mandates, saying, “They can’t arrest us all.”

Marjorie Taylor Greene, that QAnon white supremacist, anti-Semitic, certifiable lunatic who is a sitting Republican Congressperson, knows this when she gets a crowd in Alabama cheering because their state has the lowest vaccination rate in the country and then suggests that people exercise their “Second Amendment rights” against anyone who dares to knock on their door to distribute scientific information on the safety and value of the vaccine.

Yes, this is a FASCIST PANDEMIC. And we should be using this label with everyone—especially those people who think they’re hip or daring by calling it a “scamdemic” or a “plandemic.” 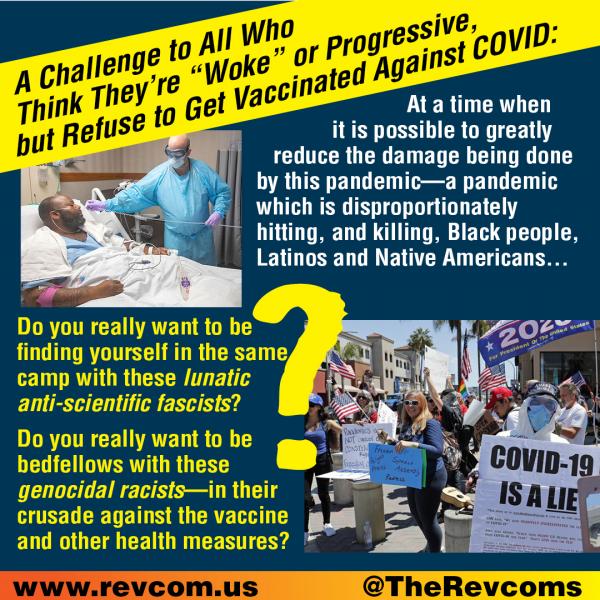 Second, all the spreading of this confusion and madness has been fueled and shaped by—but also is feeding into and intensifying—the rare time we are in when revolution becomes possible.

Bob Avakian, in his piece THIS IS A RARE TIME WHEN REVOLUTION BECOMES POSSIBLE—WHY THAT IS SO, AND HOW TO SEIZE ON THIS RARE OPPORTUNITY, notes that a basic reason why this is so is that there is a huge fight among the ruling powers of this country—now between the fascist Republicans and the Democrats—and huge divisions in the country as a whole. But more than that:

These divisions among the ruling powers, and in the larger society, cannot be resolved within the framework that has existed, and has held things together, for nearly 150 years, since shortly after the end of the Civil War which led to the abolition of slavery—they cannot be resolved on the basis of the capitalist “democracy” that has been the “normal” means of capitalist rule (dictatorship) for so long.

These divisions run through every single major issue that confronts society and end up making them all significantly more intense: from the pandemic to global warming to the refugee crisis made immeasurably worse by the climate crisis to how to understand, and educate youth about, the history of this country, and beyond.

This leads to what BA described, in his piece, THE DEADLY ILLUSION OF “NORMALCY” AND THE REVOLUTIONARY WAY FORWARD, as “cascading crises,” in which each crisis is subsumed in and amplified by this overall division. And, as the Declaration and Call states:

the crisis and deep divisions in society now can only be resolved through radical means, of one kind or another—either radically reactionary, murderously oppressive and destructive means or radically emancipating revolutionary means.

On COVID, The Importance of Getting People Vaccinated, And The Very Real Problem Regarding Rampant Individualism

Third: If you are not getting the vaccine, you need to really ask yourself THIS question:

At a time when it is possible to greatly reduce the damage being done by this pandemic—a pandemic which is disproportionately hitting, and killing, Black people, Latinos, and Native Americans...

Do you really want to be finding yourself in the same camp with these lunatic anti-scientific fascists?

Do you really want to be bedfellows with these genocidal racists—in their crusade against the vaccine and other health measures?

No, get the vaccine and fight for everyone around you to do the same. Utilize the resources at this site and at The RNL Show to learn more and spread the truth.