Why Do People Believe the Most Ridiculous and Outrageous Nonsense?

AND THE URGENT NEED FOR A REAL, SCIENTIFICALLY-GROUNDED REVOLUTION

“We believed...in some of the most fantastic things that you could ever imagine.” Malcolm X, commenting on the “theories” of the Nation of Islam (as cited in Claude Andrew Clegg III, An Original Man, The Life And Times Of Elijah Muhammad).

Malcolm was not using the word “fantastic” in this statement to mean something like “really great”—no, he was saying that the doctrine of the Nation of Islam is pure “fantasy” and leads those who follow it to believe the most ridiculous and outrageous things. At another time, it would be worthwhile getting into some of these “fantastic things,” and how they fly in the face of actual reality and lead away from what must be done to change reality in the interests of all oppressed people and ultimately humanity as a whole. (The doctrine of the Nation of Islam also is in conflict in significant ways with traditional Islam, founded about 1,500 years ago by Muhammad bin Abdullah in Arabia. In the book Away With All Gods! Unchaining The Mind And Radically Changing The World, I speak to the origins of traditional Islam and ways in which, along with Christianity and other religions, it is out of keeping with reality itself, and promotes social relations, including between men and women, that are outmoded and highly oppressive.1)

Here I am going to focus on this question: Why did Malcolm X, for a time... why do people today who, like Malcolm when he joined the Nation of Islam, are searching for the reason that they are treated in such terrible ways and the world is such a terrible place... why do people who desperately need to understand the world as it really is, in order to radically transform it through an emancipating revolution... why do so many believe “some of the most fantastic things that you could ever imagine”?

I am not speaking about the lunatic, Trump-loving, racist, woman-hating fascists who, as I have written previously:

believe, with an intense, irrational passion, that white supremacy, male supremacy, and other oppressive relations (as well as unrestrained plunder of the environment) must be firmly upheld and enforced. They have been driven to a state of vicious insanity, embracing all kinds of lunatic conspiracy theories, along with a crazed Christian fundamentalism, as a response to the threat they see to their entitled (or “god-ordained”) position and their insistence that further concessions to the struggle against oppression will destroy what has “made America great.”2

No, I am speaking of people who are the targets of intense hatred by these fascists and are subjected to the most horrific oppression by this system of capitalism-imperialism that we are now forced to live under. Why do so many of them believe things that are just not real—and in some cases are wildly in conflict with reality—including crazy conspiracy theories?

There are different reasons for this, but at the heart of much of this is the fact that many of these crazy conspiracy theories and other anti-scientific beliefs offer a simple explanation for what are seemingly mysterious phenomena, and they often provide the illusion that the horrors of the world could somehow be solved without the need for determined struggle and real sacrifice. Even when a particular conspiracy theory may spin an elaborate “explanation” of things, it usually boils down to something simplistic—the notion that the reason some people, or many people, are mistreated is because there is a group of evil people with power who cause this to happen.

The crucial scientific understanding in all this is that people live in societies that are organized as systems—systems that are grounded in the ways people interact with each other, and with the rest of nature, in order to meet their basic needs and provide for future generations. And those systems have certain basic relations, and ways of functioning, that are independent of the will of any particular individuals or groups of people, even those who occupy the dominant position within those systems.

Today we live under the system of capitalism-imperialism that dominates the world and is the fundamental cause of the terrible suffering of not only masses of people in this country but the masses of humanity throughout the world. It is possible to put an end to this suffering—which is not only life-stealing and spirit-crushing, but is also completely unnecessary—but this is only possible by coming to a scientific understanding of how this system actually works, and how the very “workings” of this system have led things to the point where the revolutionary overthrow of this system, and its replacement by a radically different, emancipating system, is possible—and is urgently needed.

In a number of works, I have gone into these questions in some depth.3 Here the crucial thing to emphasize is that coming to this understanding can never be achieved by believing things—such as “fantastical” distortions of reality and the deadly illusion of “painless progress” that doesn’t really require sacrifice—because they make us feel good, or offer us comfort and hope on a faulty foundation. No, knowing and changing the world, in the way it can be changed, in order to emancipate people everywhere from exploitation and oppression, can only be based on science—the consistent application of the scientific method—which understands that material reality, and the process of human beings interacting with this reality, is the source of ideas, theories, doctrines, and so on, and is the ultimate test of whether such ideas, theories, doctrines, etc., are true, or not. This is why the new communism that I have developed insists on, and proceeds on the basis of, the most consistently scientific method and approach to understanding the world as it actually is, and to radically changing it on that basis. 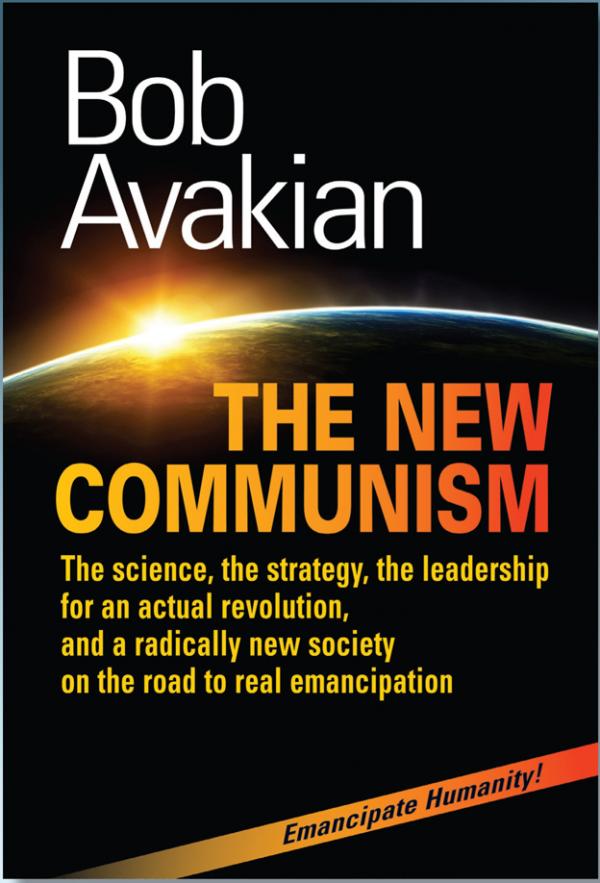 THE NEW COMMUNISM
The science, the strategy, the leadership for an actual revolution, and a radically new society on the road to real emancipation, by Bob Avakian

Available to download as PDF in: English | Spanish | Farsi

1. Away With All Gods! Unchaining The Mind And Radically Changing The World, Insight Press, 2008. See in particular Part Two “Christianity, Judaism, and Islam—Rooted in the Past, Standing in the Way of the Future,” in particular the section “Islam Is No Better (and No Worse) Than Christianity.” Excerpts from other sections of this book by Bob Avakian are also available at BA’s Collected Works at revcom.us. [back]

2. From Bob Avakian—Revolutionary Leader, Author of the New Communism: THIS IS A RARE TIME WHEN REVOLUTION BECOMES POSSIBLE—WHY THAT IS SO, AND HOW TO SEIZE ON THIS RARE OPPORTUNITY. This article is available at revcom.us. [back]

3. In addition to “This Is A Rare Time,” see, for example, Bob Avakian, The New Communism, The science, the strategy, the leadership for an actual revolution, and a radically new society on the road to real emancipation (Insight Press, 2016), especially “Introduction and Orientation, Foolish Victims of Deceit, and Self-Deceit,” and Part 1 “Method and Approach, Communism as a Science”; and Breakthroughs, The Historic Breakthrough by Marx, and the Further Breakthrough with the New Communism, A Basic Summary. Go to revcom.us to learn about these and other important works by Bob Avakian. [back]