Climate Change, “Emissions Gap” and the Deadly Trajectory of an Outmoded System

“New UN IPCC Report on Climate Change: A More Accurate & Alarming Picture of Peril Facing Our Planet” excerpt from Episode 70 of The RNL—Revolution, Nothing Less!—Show.

I watched the powerful video which brought to life the climate emergency we face in Episode 70 of The RNL—Revolution, Nothing Less!—Show. The looming danger of catastrophic climate change vividly stands out, and the real urgent need for System Change, to deal with Climate Change!

This past week, more scientific reports have been released that even further expose how dire the situation is. These focus on the “emissions gap.” This is what climate scientists call the yawning gap between the actions and plans now being taken to reduce emissions by the governments, and the drastic cuts in emissions that science shows must be made to prevent a climate catastrophe.

A key takeaway from one of the reports, from the United Nations, United in Science 2021: A multi-organization high-level compilation of the latest climate science information, lays this out: “Five years after the adoption of the Paris Agreement the emissions gap is as large as ever.” The “emissions gap” is a particular focus now, because five years ago, in 2015, the world’s governments met in Paris on the climate crisis. Each country agreed to set voluntary goals for themselves to reduce carbon emissions. This was hailed as a huge advance, but it was a fraud. As the United in Science 2021 report reveals, emissions have continued to rise year after year and no country except The Gambia, the smallest country in mainland Africa, is on target to meet their self-imposed goals.

In November another major climate meeting will take place in Glasgow, Scotland. For that meeting all countries are to provide updated goals and many have already submitted their plans. Both the United in Science 2021 and another report from the UN analyzed the plans and the results are horrifying. 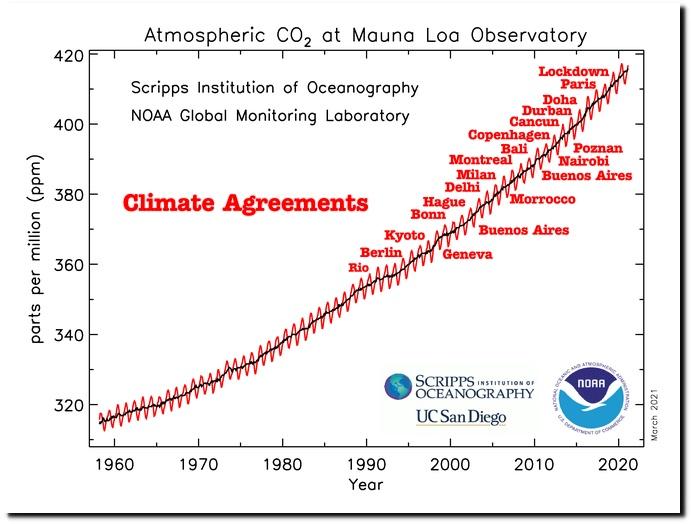 Climate treaties have not stopped the steady increase of warming gases in the atmosphere.

According to these two reports, if the plans and promises the governments are proposing were actually carried out, we would be on a pathway to 2.7 degrees of heating, nearly twice the target beyond which catastrophic change will occur.

To keep climate change below the level that science considers disastrous requires a 45 percent cut in emissions by 2030. Instead, pledges by governments for emissions cuts through 2021 indicate that we are headed toward an increase of 16 per cent in greenhouse gas emissions in 2030. While these plans are diplomatic thrusts, the governments have not come close to meeting their “promises.”  But what these reports point to is that the governments are unable to even make up plans that measure up to the crisis humanity and the planet faces. 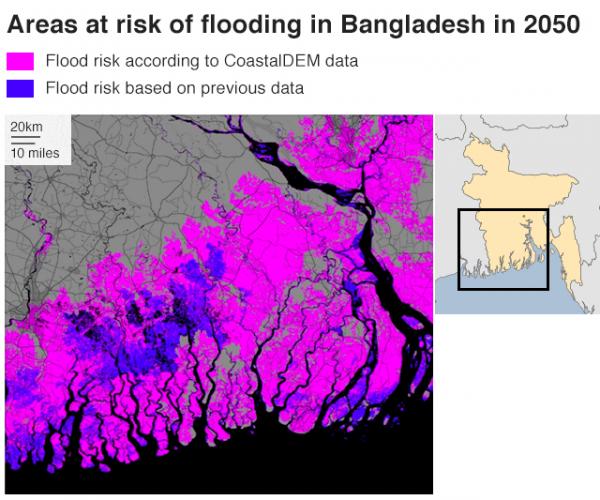 This map shows two projections of sea level rise in Bangladesh in 2050 -- the blue regions show areas that were previously thought to be at risk while the purple regions show areas that, using updated data from NASA satellites, are now thought to be at risk. The new estimate is that coastal flooding will affect 42 million people. These projections are based on modest decreases in emissions. If emissions rise at the current rate the result could be much worse. Changes in the stability of the Antarctic ice sheet could make the situation exponentially worse. The report looked at 6 Asian countries (China, Bangladesh, India, Vietnam, Indonesia, and Thailand) where 237 million people will face flooding. New elevation data triple estimates of global vulnerability to sea-level rise and coastal flooding. Scott A. Kulp and  Benjamin H. Strauss, Nature Communications, October 29, 2019

As for the U.S., while it is, historically, the main contributor to climate change, the Biden Administration just approved opening oil leases for 80 million acres in the Gulf of Mexico. More massive oil drilling and extraction under deep water in a hurricane zone—this is the reality that Biden is carrying forward for this system—and for continued U.S. domination, competitive position against other imperialist rivals, and overall strategic interests

The destruction of the environment and the burning of fossil fuels which fuel global warming is built into the capitalist-imperialist system. To change this we need to change the system. This requires a REAL revolution and building a socialist society. This is the only realistic solution to the existential threat posed by climate change.

And to get a living picture of how a socialist society would address climate change you should check out “Excerpts from the Constitution for the New Socialist Republic in North America on the Environmental Emergency,” “Some Key Principles for Socialist Sustainable Development” and the “Special Resource Page on the Environment” on revcom.us.