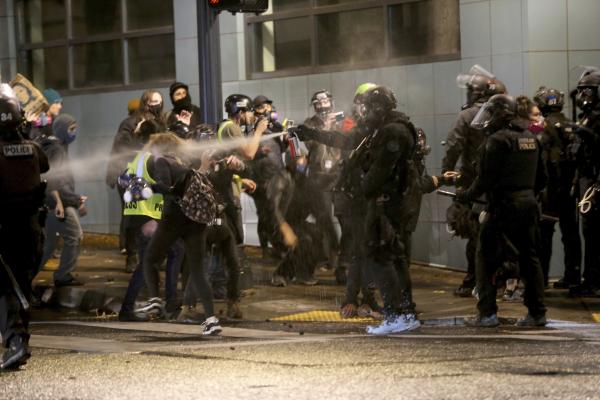 In the course of a lawsuit against massive police violence against Portland protesters taking part in the nationwide upsurge against police murder and brutality in 2020, a slide used to train Portland police came to light. Along with an image of a pig brutalizing a protester, it said:

And the Lord said...
Woe be unto you, dirty hippy;
Four thou stinketh of patchouli1 and BO;
For thou talk of Marx, yet know him not;
For thou hast bills, yet have not paid;
For thou hast dreadlocks and white skin.

And so I shall send among you,
My humble servants with hat, and with bat;
That they may christen your heads with hickory;
And anoint your faces with pepper spray.

And once thou hast been cuffed and stuffed;
Once thou has been stitched and bandaged;
Perhaps thou shall learn,
I'm tired of your shit.

This meme was the final slide in a long slideshow. Some of the presentation paid lip service to at least pretending to respect the right to protest, for some people, some of the time. But the meme was the “take-away” message, trumping all that. And the pigs who got this message—presented as both official policy and a mandate from “The Lord”—did what they were trained to do.

An official report prepared for the Portland City Council documents that Portland Police engaged in “indiscriminate use of force” resulting in “lasting injury and trauma on innocent civilians” and “illegal and unethical targeting of media, legal observers, and medics.”

And the official report contrasts this to “jovial” interactions between police and armed right-wing groups, including the Proud Boys, who were allowed “to store weapons, including firearms, on the roof of a downtown building in anticipation of a clash between protesters and counter-protesters.”

According to the Portland Mercury, this slide was produced from a meme called the "Prayer of the Alt-Knight" circulated by the founder of a group which the Southern Poverty Law Center describes as the “tactical defense arm” of the Proud Boys. However this image migrated from violent fascist social media to an official police training presentation, it exposes how deeply embedded white supremacist fascists are in the Portland Police. And the close interweaving of police and fascist thugs is not at all unique to Portland. White supremacist, woman-hating, xenophobic fascists are deeply embedded in police departments across the country.2

Once the slide came to light, Portland mayor Ted Wheeler, a Democrat, claimed he was disgusted by the “harmful and divisive” message. This is the same Ted Wheeler who doubles as police commissioner in Portland, and who said in the aftermath of the protests in 2020 that he wanted to “unmask” demonstrators and that it was time to “hurt them a little bit.”

Unconstrained violence against protesters in Portland demanding an end to police murder and brutality against people of color was instigated and directed by every level of government.3 It was part of a systematic nationwide violent assault by police on the beautiful uprising that spread across the U.S. after the murders of Breonna Taylor and George Floyd.4

What was revealed by the presentation of a fascist “prayer” commanding police to assault protesters is emblematic of the nature of police forces under this system. They are institutions that cannot be “defunded,” “retrained,” or made into anything good under this system. What is revealed by all this can only be meaningfully understood and changed in light of this from the revolutionary leader Bob Avakian:

The role of the police is not to serve and protect the people. It is to serve and protect the system that rules over the people. To enforce the relations of exploitation and oppression, the conditions of poverty, misery and degradation into which the system has cast people and is determined to keep people in. The law and order the police are about, with all of their brutality and murder, is the law and the order that enforces all this oppression and madness. — BAsics 1:24

1. An herb some believe has medicinal value and has a strong odor. [back]

2. The study Hidden in Plain Sight: Racism, White Supremacy, and Far-Right Militancy in Law Enforcement (Brennan Center for Justice 9/27/20) paints a picture of widespread and deep connections between fascist thugs and “law enforcement” in the U.S. The extent and depth of these connections has implications for the coming civil war that so many are coming to see as looming. In SOMETHING TERRIBLE, OR SOMETHING TRULY EMANCIPATING, in the context of providing a roadmap to a revolutionary outcome of such a civil war, Bob Avakian identifies that “Speaking specifically of this country, even in a situation where millions of people are taking to the streets, in a sustained way, in determined rebellion against oppression and injustice, and even with some among this system’s armed forces sympathizing and identifying with this, it is very unlikely that this, in itself, would lead to those armed forces splitting apart and a significant part of them joining with the people rising up in this way. (This is all the more true of the police, whose ranks are filled with hardcore right-wing brutes.)” [back]

3. In addition to violence perpetrated by Portland Police, Trump sent in federal enforcement agents who used overtly fascist tactics, including using plainclothes agents to kidnap protesters and hold them in unmarked vans without charges or due process of any kind. [back]