An Interview with a Member of Scientist Rebellion

“It’s time to up the ante” … “there are alternative ways to value things that are of value.”

Revcom.us Interview: A special feature to acquaint our readers with the views of significant and diverse figures in art, theater, music and literature, science, sports and politics. The views expressed by those we interview are, of course, their own; and they are not responsible for the views published elsewhere on our website.

Editors’ note: Following are edited excerpts of an interview conducted by one of the members of the Revcom Environmental Writing Group with a member of Scientist Rebellion, and a participant in the April 6 Global Day of Action, Dr. Rose Abramoff.

Revcom.us: Could you tell us about Scientist Rebellion and what you did on April 6?

Rose Abramoff: So, Scientist Rebellion is a nonviolent direct-action organization. And yesterday, April 6, they held a day of action. It’s sort of in response to the IPCC working group III report’s release [Intergovernmental Panel on Climate Change], because Scientist Rebellion leaked a version of that report, and that leaked version represents the version that scientists put together and reviewed. 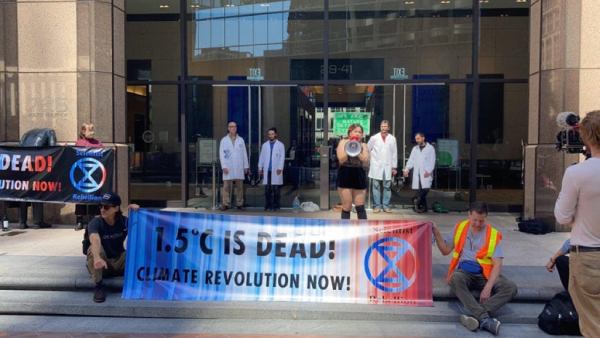 Scientist Rebellion activists chained themselves to the front doors of Chase Bank in Los Angeles. The scientists were later arrested by the LAPD.

And I was actually a technical reviewer for the IPCC report, but I focused much more on working group I, which is the physical science basis. But essentially, working group III focuses on the steps that are needed in order to mitigate climate change. And so, it’s one of the most powerful ones because—and I think if anyone heard the Secretary General of the United Nations, António Guterres, summarize his feelings upon the release of working group III, he basically said, you know, we’re screwed if we don’t take action... [The IPCC Working Group III report] basically says: we’re not at all on the road to [keeping] warming below 1.5 degrees Celsius, that’s functionally impossible.

At this point, we would have to peak emissions in about two and a half years, which no government is even remotely close to being able to do. Or even showing an interest in doing that, you know; we’re building more fossil fuel infrastructure, and we can’t do that at all, we actually have to dismantle some fossil fuel infrastructure. Because like the existing infrastructure completely fulfills, and then a little bit of overshoots, our carbon budget to stabilize at 1.5 [degrees Celsius of warming above pre-industrial levels]. And so that’s why, you know, a lot of the activists that we worked with, like the action I participated in Washington DC, had a bunch of pipeline activists, indigenous water protectors, who have been fighting tooth and nail to keep new fossil fuel infrastructure from being built.

Revcom.us: And could you just tell us a little bit about your work as a climate scientist, what you do?

RA: Yeah, so, I am a staff scientist at a large national laboratory who I do not speak for, very importantly; I speak on my own behalf. But yeah, in this research laboratory, I do mostly simulation modeling and statistical modeling, of how global warming and land use change and other changes to the climate system, including how droughts affect the carbon cycle. So how much carbon dioxide is getting released by plants and soil? How much carbon can be absorbed and stored by the soil? And how long can it be stored and sort of what’s the maximum capacity of that natural carbon storage?

It’s pretty fun and interesting. I have also done field and lab work in the past in different ecosystems. But nowadays, I’m doing much more simulation modeling, just because there are really large datasets and like lots of heavy networks and instrumentation that just automatically collect data. So, there’s kind of a glut of data out there to work with, if you have the will....

Revcom.us: And what’s the relationship between your work as a climate scientist and your decision to step out and take the initiative that you did on April 6 with Scientist Rebellion?

RA: Yeah, I mean, it’s been really growing over time. I was a biology major in my undergraduate. And it was, it just was sort of taking an environmental science class here and there. And I thought, you know, the Earth was interesting. And I was interested in studying its various cycles. I’ve always been in one way or another studying different aspects of climate change. It used to be related to how much carbon gets allocated to plant roots. How does warming affect the spring leaf out and flowering times? It usually makes these things happen earlier and earlier. And so, I was always interested in how the world was changing and being changed by humans. I think the difference is that back then it was sort of an academic interest.

And I feel like this is a trajectory that a lot of scientists are on: we start from a place of academic interest, and initially have a really solid wall built up between the things that we study, which is inherently scary, and the trends that we’re seeing, and how we feel about it. Because when I’m, you know, at the watercooler talking to my colleagues, all of my colleagues have feelings. They’re all people. They’re really frustrated, they have anxiety, they have grief, about everything we’ve lost, and what we expect to see for the future. But a lot of my colleagues are not willing to express that publicly, because of this idea that scientists are supposed to remain neutral in all things. And I used to agree with that statement. And I’ve come to sort of think about it differently over time. Now I basically understand the fact that “scientist” is not your whole identity, right? It’s a job. It’s the thing that you do. And then you’re also a person with unalienable rights to free speech, you know, who has feelings and has thoughts and has anxieties. And I think, like scientists better than all people, need to be expressing what they know, and how they're feeling about it.

Because if we don’t act like this is an emergency, if we’re just keeping this extremely calm face, and are writing our articles, and, you know, writing our reports, nobody’s gonna believe us, this is such an urgent crisis. And I think that that’s one of the issues with the IPCC report. We write this report—it’s detailing the end of the world in the most boring way possible. 1000s of pages. No offense to the IPCC report. It’s good stuff, it’s solid science. You know, everything that me and [fellow climate scientist and Science Rebellion participant] Peter Kalmus are freaking out about is supported by facts from that report, which are solid and peer reviewed, and are based on 1000s of scientists and decades of research. But it’s written in such a dry way that when you deliver that information to people as written, you can’t tell that we’re talking about the potential end to the habitability of major systems on our planet. It just doesn’t come through. And so, I really think people need to see scientists in the streets freaking out, so that they know: This is real. We’re not making it up. And we’re not exaggerating.

Revcom.us: And as far as stepping out and the escalation of actions, the willingness to put yourself on the line, and step outside of the normal bounds of protest or of addressing grievances by doing these forms of nonviolent civil disobedience. How does that relate to the goals of Scientist Rebellion and the climate movement more generally?

RA: Yeah, I mean, I think Scientist Rebellion chose nonviolent direct action as a tactic because it has a historical legacy of it being really effective at generating a lot of attention and getting the government’s attention with relatively few people who believe strongly.

My personal answer to that question of why nonviolent direct action is essentially that I feel like I’ve tried every legal thing. And it hasn’t appeared to move the needle. I don’t see every other legal thing that I have done affecting this general outcome. Maybe it is in incremental ways that I’m not noticing. But you know, we have two and a half years, we’re all frustrated, nothing is happening. And so, to me, it’s like time to up the ante. Like, I’m just trying to do something.

Revcom.us: And related to that, my last main question is in regard to government action, or inaction, and the climate emergency. Are governments acting in ways that are commensurate with the gravity of this emergency? And are there particular states and governments that need to be singled out in this regard? And just in general, could you talk a little bit about what you see as some of the transformations and actions that do need to be taken?

You know, a straw man I commonly get in questions is like: Oh, what about overpopulation? You know, like, what if we just stop having babies? And my answer to that is: one we already kind of are and the countries which have high fertility rates right now have negligible carbon emissions, they’re not contributing to this, to climate change, really, or whose contribution has just been very few extremely wealthy people who have extremely high emissions per capita. And that’s really what we need to focus on. There are very relatively few of us who represent a relatively large portion of the emissions. And we’re doing things that are really not necessary.

And I think not even commensurate with the holistic idea of abundance, you know, and luxury. People always were like, “Oh, no, like, I can’t, I’m not going to have my iPad.” And it’s like, first of all, you probably could still have your iPad. But second of all, do you need an iPad to be happy? Is buying and then throwing away like 1,000 iPads—which is kind of how GDP is measured—is that a good measure of  true wealth and abundance, happiness, contentment, and sufficiency? I would say no. And I think most people who think about it would say no. This idea of the things that we can buy, and then throw away may not be the best measure of what we have—and maybe there are alternative ways to value things that are of value.