Editors' Note: We received the following from the Emergency Campaign to Free Iran's Political Prisoners.

A brutal campaign of arrests, torture and executions is now taking place in Iran. This is an emergency. The lives and dignity of hundreds of political prisoners are in imminent, mortal danger.

All those who stand for justice and yearn for a better world must rally to the cause of freeing Iran’s political prisoners NOW.

Beginning in October 2020, the Islamic Republic of Iran (IRI) launched a massive new wave of arbitrary arrests against labor, women's, and human rights activists; dissident intellectuals and artists; protesters and revolutionaries; and members of religious and oppressed minorities.

Many are now being tortured, held in solitary confinement, and denied legal rights, assistance or medical aid, as the IRI attempts to force “confessions,” conducts sham “trials,” and carries out brutal floggings.

Amnesty International (AI) warns of an “alarming rise in executions,” with 49 prisoners executed between December and February. This regime has a blood-stained record of attempting to violently crush any form of dissent or resistance—including sudden mass executions of political prisoners as happened in 1988.

We cannot allow this to happen again.

Importantly, this repression has been met with inspiring heroism. Many prisoners, their families, supporters and various Iranian organizations have been speaking out and demanding freedom for ALL Iran’s political prisoners—at great risk to their own safety.

The Iranian Writers Association (IWA) has denounced the execution of prisoners of conscience, even as it is under extreme repression. Several members are imprisoned, including Arash Ganji, sentenced to 11 years for translating a book on the Kurdish struggle in Syria. Journalist and Defenders of Human Rights Center member Narges Mohammadi was imprisoned for eight and a half years. She is calling for protest against the solitary confinement of the two brothers of Navid Afkari, the Iranian wrestling champion executed last year for being part of the 2018 mass rebellion. The brothers are sentenced to 54 and 27 years.

The documentary film Nasrin (about imprisoned attorney Nasrin Sotoudeh) is an example of this nightmare of detentions and this implacable spirit of resistance.

A number of dual nationals from Europe, Australia and the U.S. are being held in the “political ward” of the notorious Evin prison in Tehran. Amnesty International (AI) recently sent out urgent action alerts on two of these prisoners:

Women prisoners are increasingly transferred to more remote prisons, limiting access by their family and lawyers. They include:

All of Iran’s political prisoners must be unconditionally and immediately released.

We say to the U.S. government: NO THREATS OR WAR MOVES AGAINST IRAN, LIFT U.S. SANCTIONS

Write to the Emergency Campaign to Free Iran’s Political Prisoners at: FreeIransPoliticalPrisonersNOW@gmail.com

WHAT WE CAN DO 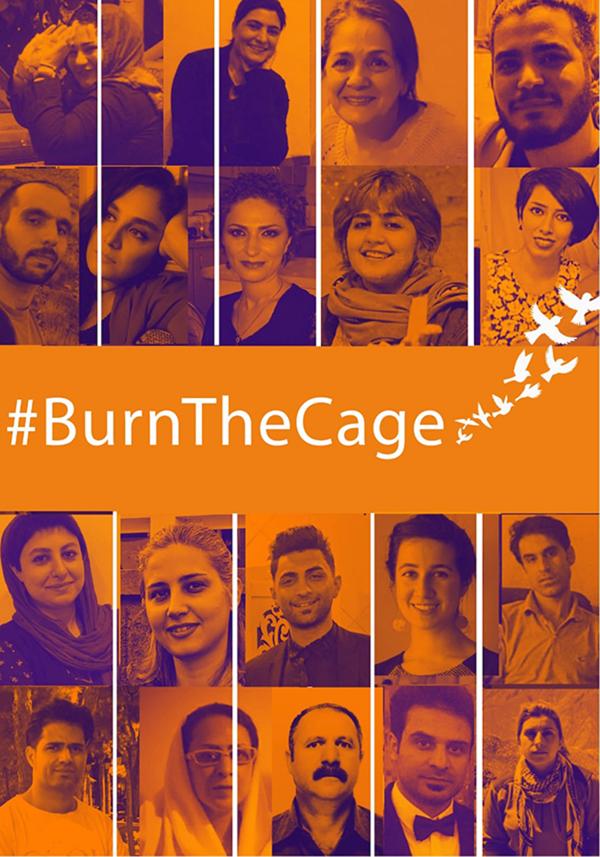 Photos of political prisoners from @burn_the_cage Instagram    Burn the cage.

Write to the Emergency Campaign to Free Iran’s Political Prisoners at: FreeIransPoliticalPrisonersNOW@gmail.com