Many Hundreds Around the Country Protest the Pig Murders of Daunte Wright and Adam Toledo... And So Many Others

Brooklyn Center, Minnesota. Protests of hundreds have continued every day for six nights now since Daunte Wright was murdered in cold blood by the pigs on Sunday, April 12. Brooklyn Center, a suburb of Minneapolis that was more than 70 percent white in 2000, now has a majority of Black, Latino, and Asian residents. 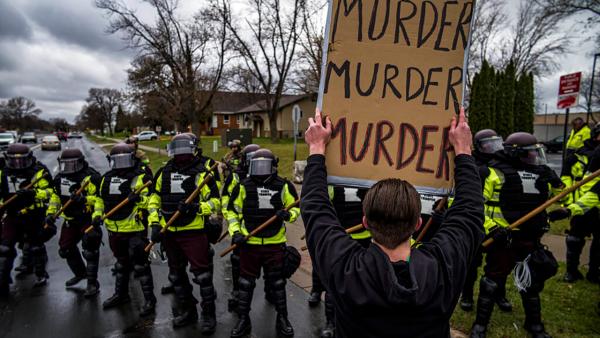 Coming out in the rain and snow this past week, people have been demanding justice, chanting the name of Daunte Wright, and from the beginning, angrily confronting the pigs who used tear gas against the crowd. The protests have targeted and gathered at the Brooklyn Center Police Department. But Friday night, April 16, saw the largest number of arrests, reaching 100. 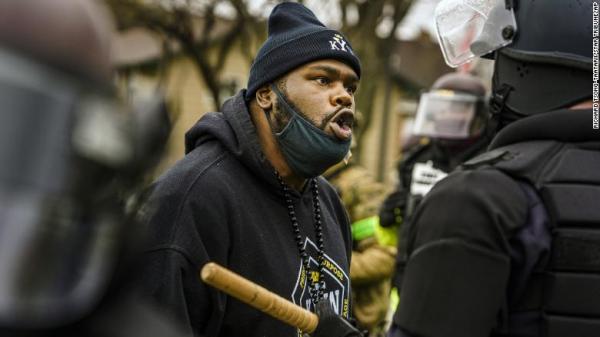 Reportedly people began to break into the fence surrounding the Brooklyn Center Police Department and refused to obey orders to disperse. The crowd grew from 250 in the afternoon to 500 by evening, despite the fact that authorities had announced a citywide curfew from 11 pm to 6 am and then declared the protest an unlawful assembly. 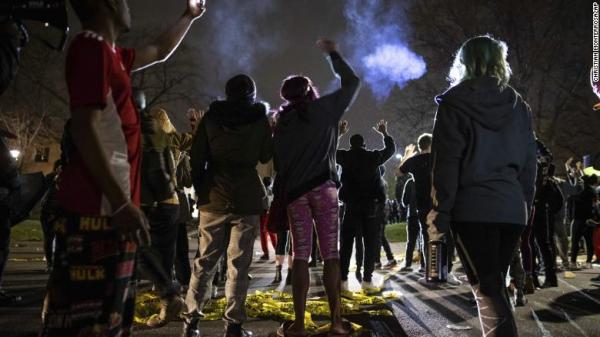 People have poured into the streets in Brooklyn Center, Minnesota, despite curfews, to protest the murder of Daunte Wright by police.    Photo: AP

According to one news report, a “cavalcade” of squad cars flooded the street and Minnesota State Patrol pigs rushed in to form a line blocking the street. Pigs deployed flash bangs to disperse the crowd, and people could be seen on video trying to protect themselves with gas masks, respirators, helmets, and umbrellas. When the cops used tear gas, some people tried to leave through backyards. But then the pigs swarmed people from all sides. One reporter described how protesters were “kettled” (surrounded—not letting anyone leave), then the pigs moved in to make mass arrests. It was reported that some residents not involved in the protest were detained and that members of the media were forced to show credentials to prevent being arrested.

John Harrington, the state’s commissioner of the “Department of Public Safety,” promised that there would be “A robust assortment of National Guard, state and local police departments working together” in the days to come. At least 1,000 National Guard troops have been stationed in the area since Monday. And with the coming verdict in the trial of Derek Chauvin, the pig who killed George Floyd, and the specter of even more and larger protests, the city is maintaining a curfew and schools have been closed.

Chicago, Illinois. Friday evening, April 16, thousands of people protested on the city’s northwest side to protest the pig killing of 13-year-old Adam Toledo, taking a knee and shutting down the six-corner intersection of Milwaukee, Diversey, and Kimball and filling the streets for many blocks. People held signs saying things like “Justice For Adam” and “We Are Adam.” The diverse crowd included people who came from many other parts of the city. 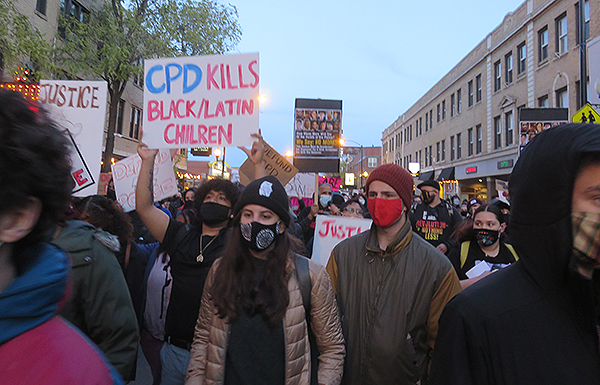 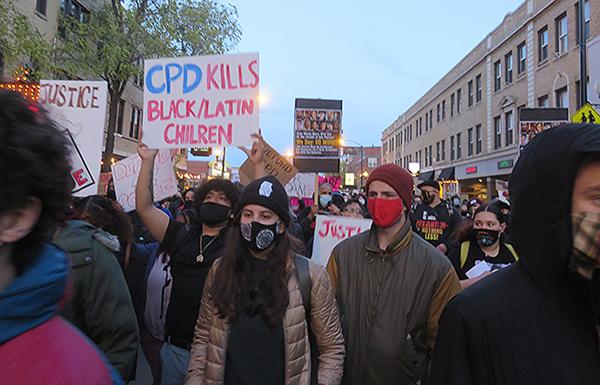 At least two people were arrested. Black Lives Matter Executive Director Amika Tendaji, the mother of Anthony McCullom III, one of those arrested, said, “There was nothing that happened out there that warranted the arrest of any young people who were out there fighting for their lives. They [the police] were brutal to those protesters and there are no signs of it slowing down…. If folks keep getting arrested, the idea is that we will be too afraid to keep fighting back, but at this point we have no choice. We’re fighting for our lives.”

There had been other protests during the week but this was the largest, and perhaps angriest, coming the day after a video was released on Thursday showing that Adam Toledo, a 7th grader, turned around and had his hands up in the air, when a Chicago pig shot him less than a second later.

Maria Sanchez, who lives a couple of blocks from where Adam Toledo was murdered, recalled what it was like to watch the video. She said, “It made me sick to my stomach, it made my blood boil.” Karina Solano, an organizer with Únete La Villita, said, “We demand justice for Adam Toledo. Adam Toledo, a 13-year-old boy. He should still be alive…. Nothing, nothing, nothing, nothing excused CPD having shot and killed him. Nobody deserves to die at the hands of the police, especially not kids.” Roxana Figueroa, the cousin of 22-year-old Anthony Alvarez, who was killed by Chicago pigs two days after the murder of Adam Toledo, said watching the video gave her the strength to fight for justice for Alvarez. Standing with seven other family members, including three young kids, she said, “When I saw the video, it gave our family hella strength to show up today.”

Later in the evening, tensions escalated when protesters faced off against a line of police. Demonstrators chanted “f--k the police” and “f--k 12.” At one point demonstrators headed toward Mayor Lori Lightfoot’s home nearby. As a line of bike pigs stopped the protest from getting near the house, people chanted “CPD, KKK, how many kids did you kill today?” 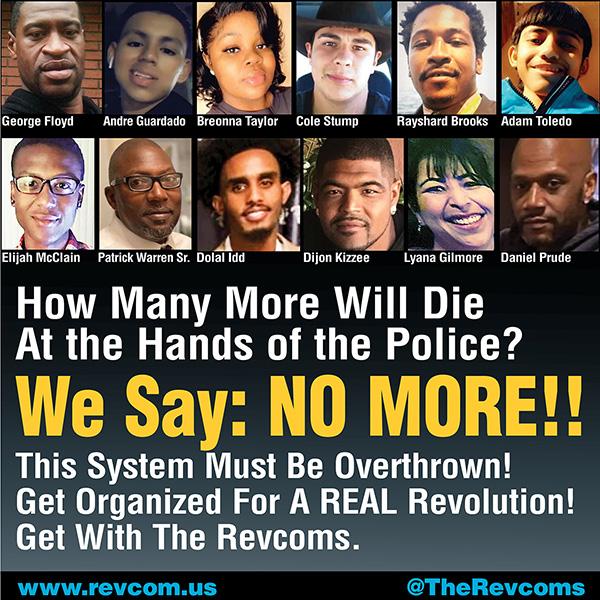 Around the country hundreds of others have also taken to the street to protest the murder of Daunte Wright and Adam Toledo … and so many others. These include: 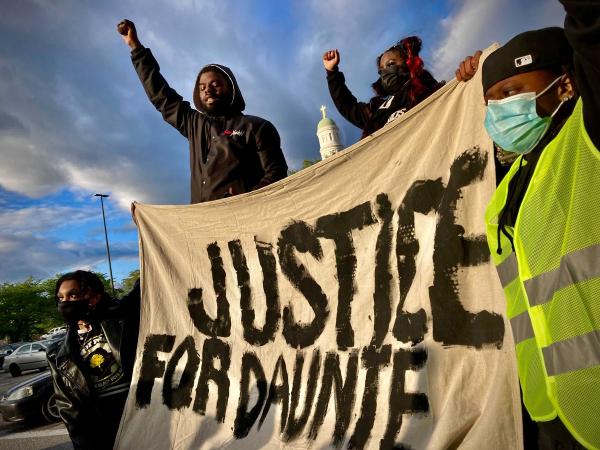 Thursday, April 15, in La Crosse, Wisconsin there was a community discussion about systemic racism and police brutality. Afterwards, a Black student group led a protest of about 100 people through downtown and blocking traffic at one intersection. Friday night, people took to the streets in Chicago to protest the killing of 13-year-old Adam Toledo by a Chicago cop and Daunte Wright in Brooklyn Center. This was one day after the body-cam video was released of the March 29 shooting, clearly showing that Toledo had his hands up in the air when he was shot and killed. On Tuesday after a Brooklyn, New York, rally at the Barclays Center, 100 cyclists rode across the Brooklyn Bridge. And at other protests people have marched across the Manhattan Bridge, from Brooklyn to Manhattan, stopping traffic. Other protesters in NYC marched through Washington Heights, north of Harlem, heading for the Alexander Hamilton Bridge. 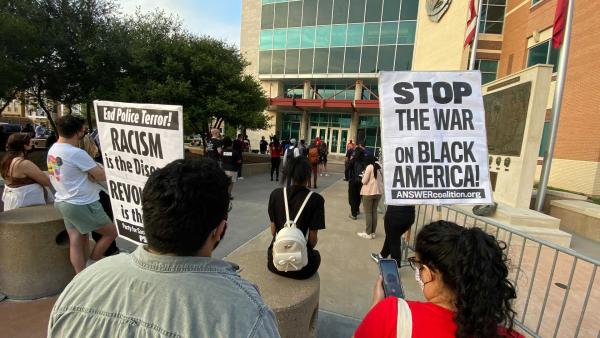 Dallas, Texas, April 13, protest against the murder of Daunte Wright 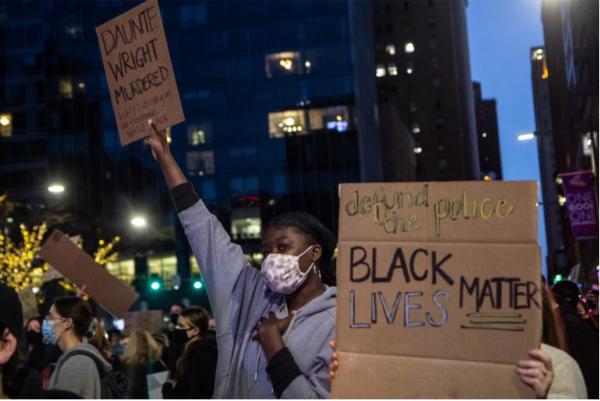 On Thursday in Los Angeles, people took to the streets near Sunset and Vine in Hollywood. In Washington, DC, a video of a protest Monday night shows people chanting “What do we want? Justice. When do we want it? Now. If we don’t get it burn it down!” On Friday night, a protest in Oakland, California, drew around 300 people and there were reports of people setting fires and breaking windows. In Portland, Oregon, people took to the streets to protest the pig killings of both Daunte Wright and Adam Toledo, as well as a man shot and killed in the city’s Lents Park. People marched through Lents Park, tearing down police tape and facing off with the riot-geared cops. One news report said some protesters with sticks chased cops who responded with smoke canisters, pepper spray, and a rubber ball distraction device. On Friday night, people gathered in downtown Fayetteville, North Carolina, where George Floyd was born. They gathered in honor of and to protest the killing of Daunte Wright, answering the call “Stand with us” and “We won’t be silenced.” One protester shouted into a bullhorn, “I can’t sleep,” as people responded with “Because our babies are dying.” 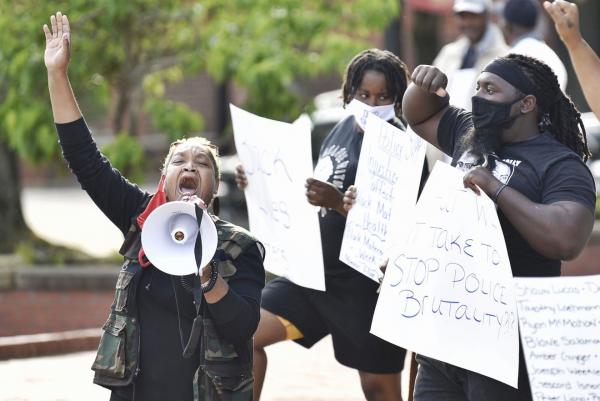 There have been protests in many other cities and demonstrators continued in Chicago and Brooklyn Center on Saturday and Sunday nights.

Why is Police Terror Necessary For This System?
by Bob Avakian

This is an excerpt from RACIAL OPPRESSION CAN BE ENDED—BUT NOT UNDER THIS SYSTEM, by Bob Avakian