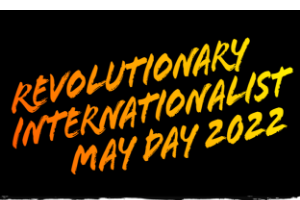 NO US/NATO WAR WITH RUSSIA! NO WORLD WAR 3!
IT’S THIS SYSTEM, NOT HUMANITY, THAT NEEDS TO BECOME EXTINCT!

Today, as Russia invades Ukraine and the U.S. marshals its allies in NATO to wage a proxy war—with the real threat of a “shooting” war between these superpowers and even a nuclear holocaust of the whole planet… the people must act.

Join with us to march on May 1 as we sound the alarm and say:

NO US/NATO WAR WITH RUSSIA! NO WORLD WAR 3!

Today, as this war—along with the intensifying destruction of the environment—threatens the very existence of humanity, and…

as the police murders and repression continue…

as the Supreme Court moves to end the right to abortion...

as new horrors face immigrants, and

the people must act.

This war, and these other horrors, are all products of a system—the system of capitalism-imperialism.

Join with us to march on May 1 as we point to the cause and to the solution, and say:

IT’S THIS SYSTEM, NOT HUMANITY, THAT NEEDS TO BECOME EXTINCT!

The revolutionary leader and thinker Bob Avakian has recently said that "humanity cannot afford any longer to allow these imperialists, on any side, to continue to rule the world, and battle over who will dominate in this situation, with the very real and dire threat this poses to the future, and the very existence, of humanity.” And he has made the point that while we do face the real prospect of something really terrible in the situation today, “it is also possible that we could wrench something really positive out of it—revolution, to put an end to this system and bring something much better into being.”

Today, as all this looms, we dare to say:

Join with us on internationalist May 1 to learn more about this revolution, to start to get active, and to build the organization we need.