The NOI Is ALL PLAYED OUT

BA is forging the path for emancipation: Let’s Bust This Open!

by Noche Diaz, National Spokesperson for the Revolution Club 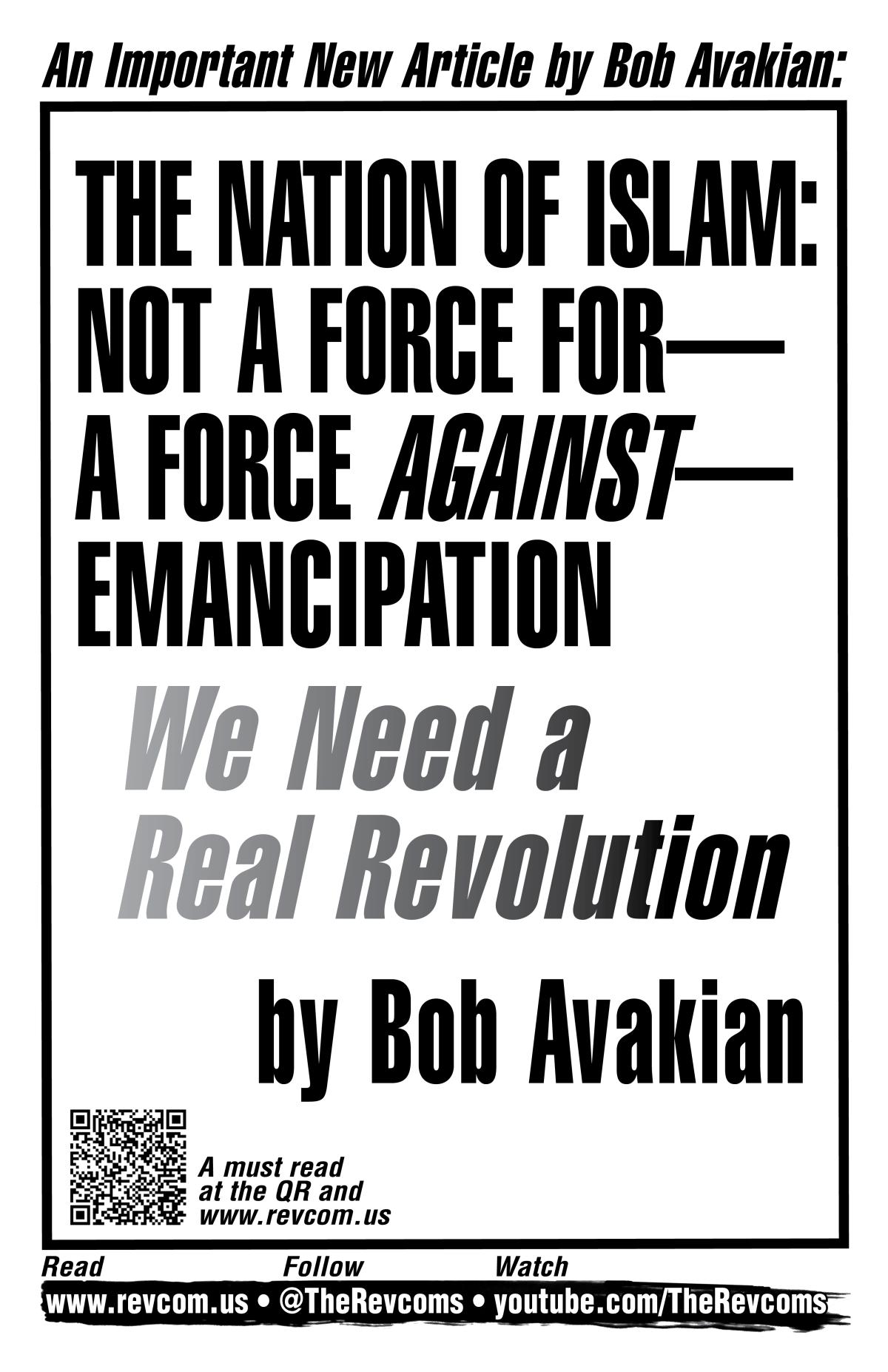 I was very energized and challenged with the recent publication of the article by Bob Avakian, “THE NATION OF ISLAM: NOT A FORCE FOR—A FORCE AGAINST—EMANCIPATION, We Need a Real Revolution.” It really pisses me off how many people who genuinely hate white supremacy are played into thinking that Farrakhan and the Nation of Islam (NOI) represent anything even close to a force seriously opposing white supremacy, or any oppression… and what this tells us about how low people’s sights are, that those aren’t even the questions being looked at to evaluate their, or any other force’s, doctrine and program (what they think, and what they do). 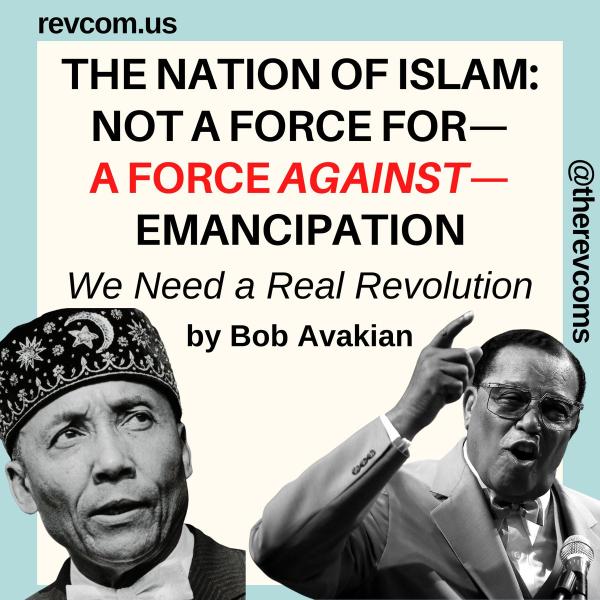 It’s incredible the way BA takes apart the fantastical nonsense of Farrakhan and the NOI, and why this leads them to be a force AGAINST emancipation, all while this is done consistently from the standpoint of what it will take to actually END white supremacy and all oppression, starting from the very beginning and returning to the fact that,

I am writing this letter because I don’t want this article to just be discussed among the too few numbers of us who are already in the revolution, or even just among new waves of people we are bringing into the revolution now. Carl Dix, Joe Veale, and myself are setting out to take this up and spark broad engagement and STRUGGLE nationally around the substance of what BA is putting forward in this article. We know this is controversial—and it SHOULD BE. This goes up against a lot of things that people are invested in. And that’s exactly the point: right now too many people are invested in dead-end shit that keeps this system going, while letting some like Farrakhan and the NOI pimp off of the very oppression that they try to pose and pretend to be opponents of. And a lot of the people who are drawn to or confused by this need to see it taken on the way BA does, with the confidence that people NEED to and CAN cast off this fantastical nonsense and take up something really worth living and fighting for—A REAL REVOLUTION.

When this article came out I began thinking of the people who need the leadership being given here. People who aspire to, and are capable of, playing a truly great role in putting an end to all oppression. Like masses of Black people, as well as other oppressed people, who are caged away in the hellholes of this country’s dungeons—including the many I’ve encountered and struggled with myself one time or another in this system’s jails—who are beaten down, demoralized, or broken by the degradation and self-degradation caused by this dog-eat-dog system, only to encounter nonsense that blunts their better aspirations. Nonsense that keeps them waiting for a never-coming fantastical salvation. Nonsense that keeps them looking to the sky, but never able to lift their heads to emancipation. Nonsense that keeps people away from looking at the real-world causes of oppression, and the real-world path to asserting their humanity—instead getting caught up in new ways to degrade each other, to degrade women, to degrade themselves, all while letting this real-world system off the hook and continuing to grind people up.

I encourage everyone to study this article from BA, and think about and work on how this becomes widely engaged and debated. How can you spread this article from BA throughout different neighborhoods? How to get students engaging with what struggle BA is waging in this article? How to get discussions and debates going wherever there are people looking to dig into this? Write us at getorganizedforrevolutiontour@gmail.com with your thinking and questions on this. Carl, Joe, and I are also looking for key ways to enter in on this by getting onto radio, podcasts, or inside prisons and schools, so email us if there are ways you can help make that happen. It is long past time these things get busted wide open, especially NOW when lines are being drawn throughout society around what future we’re all going to get, and when what people do with their lives NOW will count a great deal, one way or another, because we live in a rare time where the way this system has been held together is fraying apart in ways that could lead to something terrible OR something emancipating IF this is seized on to prepare for real revolution. As Bob Avakian ends his article:

The way the full emancipation of Black people will finally be achieved is through the assertion of the fundamental humanity of Black people—which, in its highest expression, means becoming part of the revolution to do away with all exploitation, all oppression, all inequality, all degradation of any part of humanity: a communist revolution.

As I have previously given voice to this:

There is the potential for something of unprecedented beauty to arise out of unspeakable ugliness: Black people playing a crucial role in putting an end, at long last, to this system which has, for so long, not just exploited but dehumanized, terrorized and tormented them in a thousand ways—putting an end to this in the only way it can be done—by fighting to emancipate humanity, to put an end to the long night in which human society has been divided into masters and slaves, and the masses of humanity have been lashed, beaten, raped, slaughtered, shackled and shrouded in ignorance and misery.

It is not fantastical distortions of reality—and certainly not racist or male supremacist “theories” and doctrines—but a consistently scientific method and approach, that is necessary and essential to guide the struggle to finally and fully put an end to any and all systems and relations of oppression and exploitation, and the distortions of reality that serve to reinforce them. Once again, this is why the new communism, which has been brought forward through decades of work that I have carried out, represents and insists upon the most consistently and thoroughly scientific method and approach—precisely in order to understand reality as it actually is, and to radically transform reality to bring about the emancipation of all oppressed people, everywhere, and ultimately all of humanity.