China's Commemoration of the 100th Anniversary of the Chinese Communist Party

Not the Party of Mao and Revolution...
But of Counterrevolution and Capitalism-Imperialism

Official celebrations have been taking place throughout China to mark the 100th anniversary of the Communist Party of China (CPC). Xi Jinping and other leaders of the ruling CPC pretend that there is an unbroken chain from the founding congress of the party in July 1921 to the present-day CPC. Theirs is a story of the CPC realizing its mission of turning China into a major world power that will not bend to foreign will or threat.

The U.S. imperialists and other Western imperialists promote their own version of this “unbroken chain” narrative. Theirs is a story of an historically “authoritarian” party that, from its very inception, has sought to control lives and dominate the world.

Both of these accounts are profoundly wrong lies and serve reactionary ends. 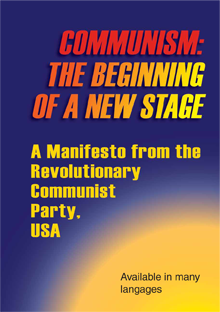 Read in English and in other languages

Getting Clear on Some Basic Facts of the Chinese Revolution... and Counterrevolution

Here is the truth. These one hundred years since the founding of the CPC have not been an unbroken chain but rather a matter of, a struggle between, revolution and counterrevolution.

The Communist Party that rules China today is NOT the same Communist Party that Mao Zedong led from 1935 until his death in 1976. It is NOT the same party that, under Mao’s leadership, stood for revolution, socialism, and a communist world without exploitation and oppression... the party that, under Mao, actually led the Chinese people to make revolution. The socialist revolution led by Mao was overthrown in 1976, shortly after his death and the arrest of his closest leading followers.

Here is the truth. The China of today is a thoroughly capitalist society—a rising imperialist power. The rulers of China have kept the name “communist party” and some of the trappings of the revolution to bolster their claims to legitimacy. But what was once a bastion of revolution now brutally exploits its people and competes with the U.S. for global supremacy.

In 1949, the Chinese revolution gained victory. This was the culmination of more than 20 years of armed struggle that went through different phases: against oppressive warlord forces... against Japanese imperialism that had invaded and occupied much of the country... against U.S. backed reactionaries. The revolution under Mao’s leadership mobilized tens and hundreds of millions of peasants, workers, and broader sections of society in heroic struggle to put an end to the savageries of imperialist domination and landlord rule. But the seizure of power in 1949, as Mao emphasized, was not the end point but the beginning of a complex process and struggle of transforming society and thinking.

Mao was leading people on the socialist road. Hundreds of millions took up the cause of forging a society free from exploitation and oppression. But a new capitalist class had arisen within the stSome Essential Historical Backgroundructures of the CPC and the new socialist state—and they were organizing to take China down the capitalist road. Mao made the unprecedented analysis of the danger of capitalist restoration under socialism and how to combat this.

In 1966, Mao launched the Cultural Revolution based on that analysis, calling on masses of people to rise up to overthrow these new bourgeois forces and prevent the restoration of capitalism—and to carry the revolution forward towards a communist world. This monumental struggle and the incredible transformations that took place in China in the decade 1966-76 were a source of inspiration and direction for oppressed humanity and all who sought total emancipation and a new world.

But in October 1976, the capitalist roaders won out, carrying out a violent coup d’état a month after Mao died. 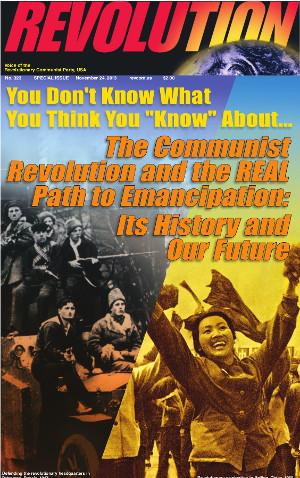 In 1977, Bob Avakian (BA) made an historic analysis of Mao’s last great struggle—of the struggle at the top levels of the Communist Party of China between the revolutionary forces on the one side and new capitalist forces on the other who were masquerading as “practical” socialists. He identified and examined the critical factors underlying the reactionary military coup of October 1976. He drew out the implications of the loss in China for all those across the planet who yearn to be free.

At a juncture of disorientation and demoralization among communist forces worldwide, BA took responsibility for leading the communist movement forward in the face of, and learning from, this terrible defeat. And BA has further developed the theoretical framework for understanding in great depth the struggle between revolution and counterrevolution within a communist party, in power or out of power. That is, whether a communist party will, as BA has expressed it, be “a vanguard of the future or a residue of the past.”

The counterrevolution of 1976 transformed the CPC into a repressive instrument serving the interests of a new, exploitative capitalist ruling class. By 2005-10, the Chinese party leadership was the core of what had evolved into an imperialist ruling class. The Chinese economy is organized around profit—with its commanding state-capitalist corporations, sweatshops, huge private pools of capital, and massive amounts of profit-yielding investment capital flowing abroad.

China’s capitalist-imperialist rulers are seizing on this 100th anniversary of the CPC to whip up nationalism and chauvinism. They are putting their growing military might on display. And putting the U.S. and other imperialists on notice that China will brook no interference in pursuing its “legitimate” great-power economic and strategic interests in central Asia, Africa, and Latin America.

For their part, the U.S. imperialists are seizing on this 100th anniversary to whip up anti-China chauvinism and to assert their “right” and “responsibility” to prevent China from upending the global, post-World War 2 international order established by the U.S. An order resting on a vast network of globalized exploitation and brute military force. For all the sharp, and sharpening, differences within the U.S. imperialist ruling class, on this there is basic unity: China is viewed as America’s chief adversary and “threat” to U.S. global supremacy.

Both sides are inflaming tensions. And the danger of escalation towards war between these two equally exploitative and oppressive powers is growing. Understanding the dynamics of the rivalry and contention between the U.S. and China is extremely important—and will be covered in greater depth at revcom.us. 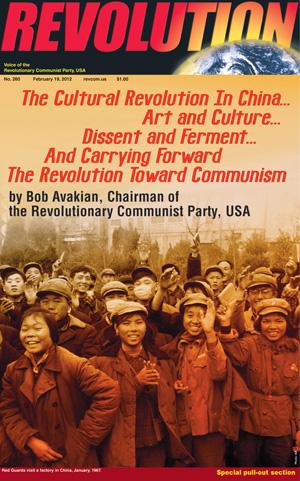 The Chinese revolution of 1949-76, in particular the Cultural Revolution of 1966-76, was the radically transformative high point of the first stage of communist revolution: beginning with the short-lived Paris Commune of 1871, and then the Russian Revolution of 1917-56. The important document Communism: The Beginning of a New Stage—A Manifesto from the Revolutionary Communist Party, USA, sums up this first stage and the way forward.

The interview with Bob Avakian on The Cultural Revolution in China...Art and Culture... Dissent and Ferment...and Carrying Forward the Revolution Toward Communism that accompanies this editorial provides valuable insights into the experience of the Chinese revolution, the challenges it faced at the time, lessons, and brings to life what BA has been bringing forward about the critical importance of dissent and intellectual-cultural ferment in the future socialist society. The excerpts from the interview with me get at the real history of the Chinese revolution, especially the Cultural Revolution, as opposed to the standard-issue slanders and distortions.

Bob Avakian has analyzed the great breakthroughs and the problems of China when it was a genuinely socialist society, taking in issues of method and approach—and gone deeply into the reasons for the defeat of the revolution. He has summed up the entire sweep of the first stage of communist revolution. He has defended, distilled, and built on the important advances in understanding made by the leaders of those revolutions and in some important ways ruptured with what has gone before. And in the process, he has qualitatively advanced the science of communism and the revolution to emancipate humanity.