Correspondence sent in to revcom.us

Four of us who went to October protests here in Michigan, two of us old hands, and two brand new to the revcoms. Three of us went to the protest at the state capitol in Lansing. The other, because of family complications, went to one in Detroit. Both the new people had been drawn in by A Declaration, A Call To Get Organized Now For A Real Revolution. One came to a meeting beforehand to discuss the attacks in Texas, what they mean, and the importance of the contingent. We used the guidelines from the Rev Club for the meetings.

On the way to Lansing we read “Why should I join the BREAK ALL THE CHAINS Contingents!, Unleash The Fury Of Women As A Mighty Force For Revolution, At the October 2 Marches for Abortion Rights” and there was some discussion of needing to emphasize challenging people to join this movement.

There were 2,000 plus people there, most women, many young women and LGBTQ people. There were numbers of mother-daughter groups. The new person volunteered to sell t-shirts and quickly sold all of them. He then got out hundreds of leaflets, and had people coming up and writing down the RevCom.us URL from his t-shirt. We had made posters on sticks and got them all out. During the rally people were coming up and asking if they could have a poster. A few times people came back and wanted to trade the poster they were given for the poster “Patriarchy & Capitalism: You Can't End One Without Ending the Other!” Most of the people who took posters also made a donation. A number who couldn't donate at the time asked how to donate online. 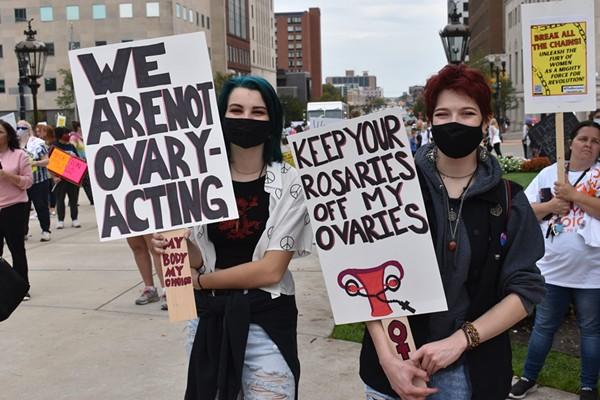 We also had a banner with the slogan “Break the Chains: Unleash the Fury of Women as a Mighty Force for Revolution!” The banner had a huge impact. It excited people and drew them to it and people wanted to know more. Dozens and dozens of people photographed it. The slogans on the leaflet had a huge impact on people. This was a scene of many people systematically reading the flyer while standing in the crowd. Many young women in particular said that they really agreed with the main slogan. But there were vague and often contradictory understandings of what revolution exactly means. People were given the Declaration and where possible we had more discussion of what it means to make revolution, the need to organize now for revolution and how they need to be part of this.

People were challenged about the extremity of how things are sharpening up, how they are being resolved violently, and the two possible resolutions and two possible futures, and that the call to get organized for revolution is based on facing reality soberly and scientifically. In general, people responded to this very seriously, including in particular the environment. Many wanted to read up and check out RevCom.us before signing up for anything, but a number took stacks of flyers and Declarations to get out in the crowd and to friends at home. EVERYBODY was urged to check out The RNL—Revolution, Nothing Less!—Show, to check out the Revolution Club, and to go to RevCom.us and explore, explore, explore. There were a couple of groups of young women from small towns in rural central Michigan who feel very isolated in these towns and want to hook up with other radical people. They were told about the Revolution Club Zoom meetings and they were very excited about discussing questions and ideas with people in other areas.

An older woman came up and said she had had two abortions when she was young because having children at that time would have upended her life, and she had always been made to feel defensive about it. She loves the Abortion on Demand and Without Apology slogan. She introduced her two teenage daughters who HAD been welcome pregnancies. Another woman with a Vote mask, came up because she was drawn to the slogan but wanted to say that she still feels the Democrats are the answer. We walked through the role of the Democrats and I challenged her to tell me how that is so and “show her work.” She said she couldn’t, but “I’m not there yet,” but said she really appreciated what we are doing and the willingness to talk it through. There were also people who read the banner and expressed concern that a revolution could be necessary. One person concisely voiced the sentiment that others had expressed when she said she had been thinking about revolution and she hoped it wouldn't have to come to that but she was afraid it was going to... And it scared the hell out of her.

There was an extremely short march. One of us stood with the banner up on a ledge where it faced the marchers as they passed by and chanted. People repeatedly stopped the march to cheer and photograph the banner for their social media. Another of us passed out leaflets to the marchers. People scarfed them up and took small stacks to get to the people around them.

After the march, many people came to us for flyers and to know more. A couple of young men ran up and said the minute they saw the slogan, they knew they had to talk to us. After being shown the four points in the Declaration, they had a million questions. They consider themselves leftists, but the leftists they relate to refused to come to the protest because it was reformist. They always thought that leftists all adhered to one doctrine or another, and wanted to know what was different about Bob Avakian’s views that had the revcoms reaching out to people at this protest. There was discussion of the urgent need and possibility of fighting for a world where the roots of oppression are being dug up, where people’s needs are being met, where the revolution is for the people of the world, and we are repairing the environment. They picked up on the contrast between this active strategy and the leftists they are involved with. One of them said “that’s what we want!” and the other one said, “that’s why we knew we had to talk to you when we saw the banner.” They bought a copy of the Constitution for the New Socialist Republic in North America. They were told about The RNL—Revolution, Nothing Less!—Show and about connecting up with the Revolution Clubs online.

The other person had family in town, and they were all going to one of the protests, but in Detroit. It was the first time he had gone out with the revcoms, which showed heart. He had t-shirts, flyers and Declarations.