Statement of the Communist Party of Iran (MLM) on Political Prisoners Nahid Taghavi, Mehran Raouf and...

Editors’ Note: We received this important statement from the Communist Party of Iran (Marxist-Leninist-Maoist) regarding the situation of several political prisoners in Iran. We want this to be made known to our readers, and all those who are concerned about the situation of the political prisoners in Iran today. This translation is from revcom.us, and any unclarities or errors are our responsibility.

The first hearing of the charges against these individuals was held on Wednesday, April 28, 2021 in Branch 26, presided over by Judge Iman Afshari. The second hearing was held on June 13 in this same branch. Prior to the trial, these political prisoners, particularly Nahid Taghavi and Mehran Raouf, were tortured through long solitary confinement. Along with the four, two other political prisoners were tried in the same branch in absentia (see below). 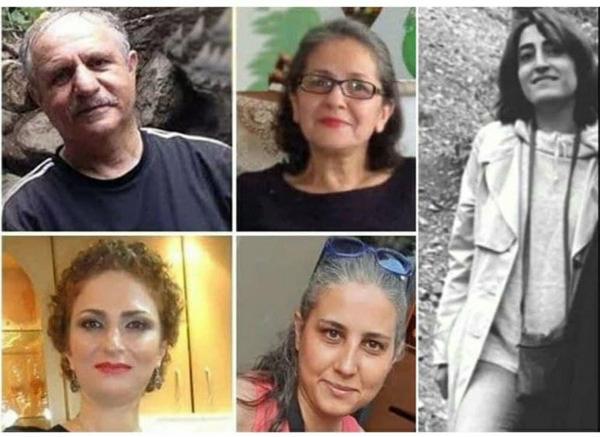 According to reports published on various news channels, including the HRANA News Agency, the "FreeNahid"campaign, and the Instagram of "Burn the Cage..." movement, Nahid Taghavi and Mehran Raouf, were each sentenced to 10 years and 8 months in prison on charges of "participating in the administration of the Communist Party of Iran (Marxist-Leninist-Maoist) in order to disrupt security."

According to the same reports, Somayeh Kargar and Bahareh Soleimani were sentenced to "six years in prison for participating in the management of the illegal group Osyan,” and eight months in prison for "propaganda activities against the regime."

Two more defendants in the case, Nafiseh Malekijoo and Mohammad Hajinia, have stated that they are currently living abroad. They were charged in absentia with "membership in the Communist Party of Iran (Marxist-Leninist-Maoist)” and "propaganda against the regime." Nafiseh was sentenced to 6 years and 9 months; Mohammad to 8 years and 8 months in prison.

As far as our Party is concerned, we declare that the organizational accusations against all the defendants in this case have no basis and are purely fabricated and it is clear that they have been arrested, tried and imprisoned for their beliefs. Their sham trial was held in a situation where Mr. Nili and other defense attorneys were denied access to documents relevant to the case, and barred from meeting with Nahid Taghavi and Mehran Raouf until the day before the trial.

The Islamic Republic, by kidnapping these loved ones and torturing them through long solitary confinement and then holding sham trials, is proving that it is a regime that lacks any credibility to hold a just and fair trial. The survival of the regime depends entirely on its police apparatus crackdown on its opponents. This court case, the charges, the verdicts—how the whole process was carried out—sharply express the fascistic and theocratic penal and judicial system of the Islamic Republic. It has been based on repression and execution of its opponents since the first day of the regime’s establishment.

In a sense, the history of the Islamic Republic is a history of repression and the killing of communists even as they attempt to erase the names, and the memory of the heroic communists from the minds, the streets and the hearts of the people. But we will never forget. We will never forget how many of the communists and revolutionary prisoners, throughout the last forty years, have given their lives but not their secrets—that is, they would rather give their lives than give information. And we have never forgotten them, that they are not alone, and that they have sown the seeds of consciousness and revolution everywhere.

We salute all political prisoners and praise their courageous presence in society. We commend them: we are proud of your liberating thoughts and your courage to express those thoughts, especially in conditions of captivity and torture. We will not forget that, right in the face of these reactionaries, you speak of liberation and of a fundamentally different society. You know you are not alone! We stand with you, shoulder to shoulder with thousands upon thousands of rebels and fighters who also want a better world.

Our Party defends these fighters and all their associates with all our might. We consider defending them to be the duty of anyone who wants to stand with the women of Revolution Street; the people of January 2017 and November 2019; the lawyers for justice; the masses and the intellectuals of oppressed nations; the protesting intellectuals; the mothers of Khavaran; exploited and oppressed workers; scientists and environmental activists; protesters of July and August of 2021; families and justice seeking people in the downing of the Ukrainian plane (flight 752); and thousands upon thousands of other protesters.

The repression by the government of the Islamic Republic continues. And our struggle continues.

The people need our imprisoned fighters with them in their struggle against the Republic of executions and Islamic lashes. Our Party demands the release of all political and ideological prisoners, all prisoners of conscience in Iran. We support the movements of the people with all our might—against the Islamic Republic’s regime of repression, censorship and torture. We support movements against the regime’s executioners and against their public squares for stoning, against their inquisitors and their courts.

We strongly hope that the peoples’ protest movements will surround the prisons like roaring sea waves, and that there will be a great and universal outcry for the immediate release of all political prisoners that breaks through the prison walls and prison doors. This is an urgent and liberating need for the entire society.

Let us say it boldly to the hopeless and desperate ones and to those spreading despair: at this moment and on this earth, there is something worth living for. To the freedom fighters, let us fight for liberation!