At a University: Workshopping a New Style of Work, “Rolling Discussions,” Mass Recruitments into the Revolution

A local university welcomed back students this week—after over a year of COVID Zoom learning. We had a big impact at two welcome back to campus events—a street fair attended by thousands of students, and an activities fair on campus. We are still learning a lot about how to apply the process described in A Declaration, A Call to Get Organized for a Real Revolution—none of what's here should be taken as a formula... but we did want to share experience for everyone to learn from.

At the street fair, we set up a table and displays, featuring the banner “We are getting organized for Revolution—Nothing Less” and including the “Women are NOT bitches, hoes, punching bags, incubators. Women ARE full human beings!” sign which turned a lot of heads. As soon as students started arriving at the block party, they began coming over to the table. It seemed people were sorting themselves out immediately in relation to both of the visuals, with many who came to the table thinking about the Texas abortion ban and some thinking about the need for radical, fundamental change. We passed out the flyer for the October 2 march, calling for a revolutionary “Break ALL the Chains” contingent and began engaging people about the rare time we are in and the need for revolution to overthrow the whole system. Very quickly people that wanted to engage this further were pulled into an on-the-spot discussion of A Declaration, A Call to Get Organized Now for a Real Revolution, from the revcoms.

A team did short bursts of agitation near the table rooted in the slogans for the Break ALL the Chains Contingent: Unleash the Fury of Women as a Mighty Force for Revolution and announcing to people that we were there to recruit them for revolution. “No Going back—No Surrender! Abortion On Demand & Without Apology! Forced Motherhood Is Female Enslavement! Christian Fascist Theocrats—Get Your Laws And Vigilantes Off Our Bodies! Patriarchy And Capitalism: You Can’t End One Without Ending The Other—Revolution, Nothing Less!” 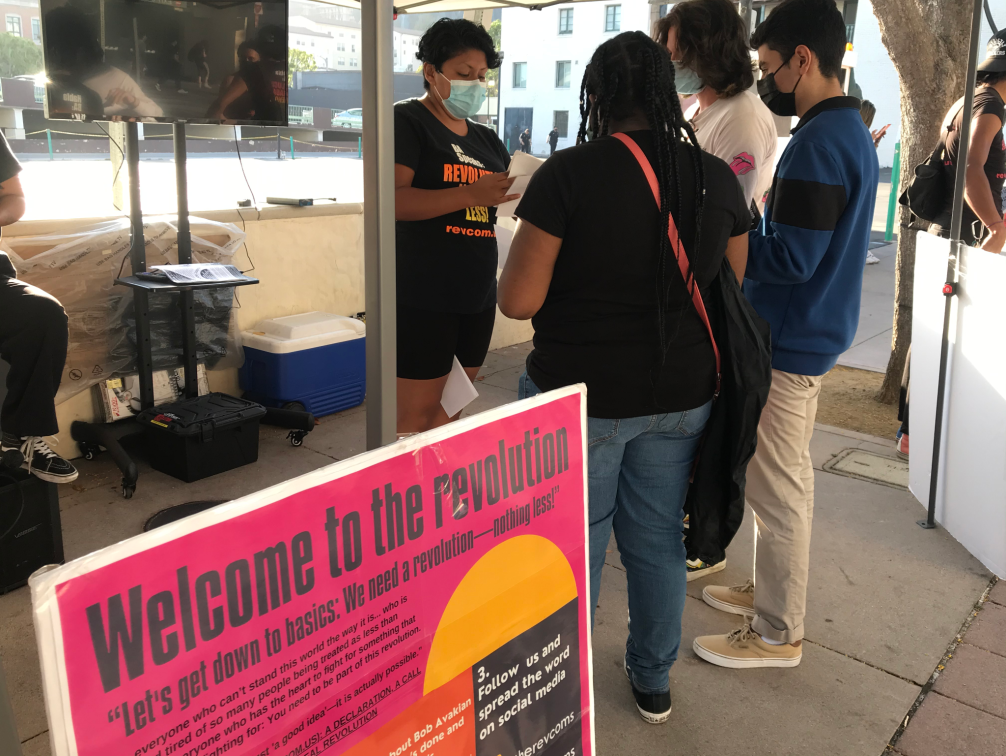 This turned a lot of heads, too, and periodically cheers went up from people (mainly women) hearing the person on the mic say simply, “Without the right to abortion, women are not free.” People were directed to go to the table to get organized for revolution and there was a steady flow to the table all night.

One group of friends were concerned about the abortion ban in Texas and the larger implications of that for the direction of society. When we said to them that we are recruiting to make revolution to completely overthrow capitalism-imperialism, two of the friends stepped back a little and one stepped forward saying, “GOOD, I agree with that, it’s what I’m looking for!”

At the table, revcoms were ready to organize people and lead collective discussions of the Declaration and Call, applying what it says in point 4 there, “Organizing people into this revolution means… spreading the word about revolution and getting people together (in real life and online) to grapple with why an actual revolution is necessary, what such a revolution involves, and what kind of society this is aiming for.”

We met some serious people doing this. Two people from the first discussion went through the Points of Attention for the Revolution, got t-shirts and wanted to join the Club and meet up with us when we return to campus. There were a handful of young people who either considered themselves “Marxists” or were reading Marxist works—for instance, one was reading The Origin of the Family, Private Property and the State by Engels, and one had read Lenin.

While the discussions briefly went through the four points of the Declaration, the two discussions that were deeper with more serious groupings of people spent most of the time on point 1 and point 3. In general, we have been putting emphasis on discussing point 1—why revolution is necessary. In these discussions there was more on point 3—about the revolutionary leadership we have in Bob Avakian (BA), because of how quickly people were challenged by and wanting to know about the bolded sentence, “We are followers of BA. And you need to become followers of BA too.”

Some of the other questions that arose in these discussions were:

*How would you organize a different economic system?

*What does capitalism have to do with patriarchy and the abortion ban?

At the Activities Fair

On Tuesday morning, there was a big activities fair on campus (where 500+ student clubs set up at hundreds of tables). We set up a big A-frame, a table, and a large banner that read: “This System Cannot Be Reformed—It Must Be Overthrown!” If our setup on Sunday turned heads, this one did on a whole other level. These bold PRO-ABORTION and revolutionary slogans stopped some people in their tracks. In a real sense it helped to “sort” people out—the radical-minded or even just seriously curious were drawn to us through the strong, clear, yet provocative messaging, and those who were not interested in something so radical walked away. 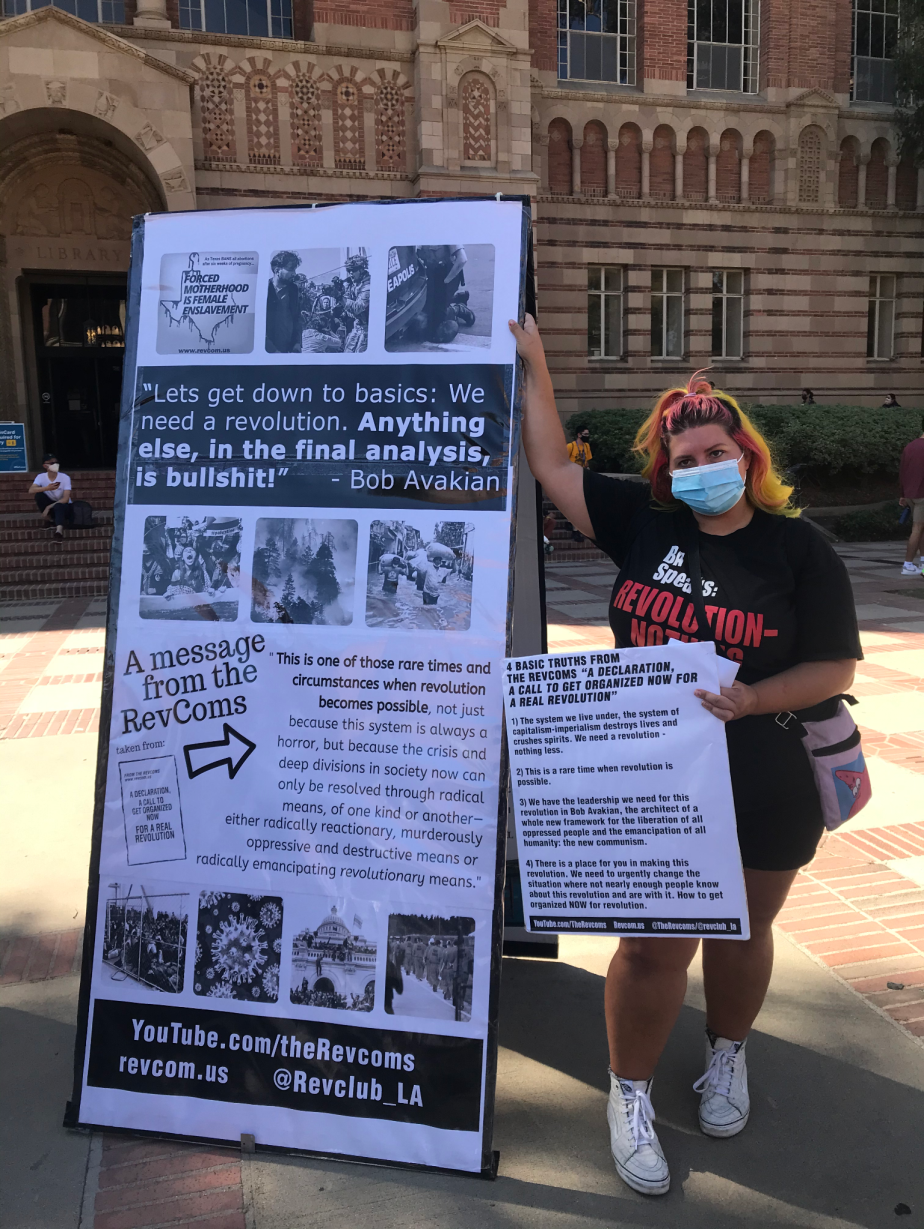 There was a constant stream of students at this fair. One of the consequences of this, flowing not just from this objective situation but also from our orientation, was a situation that developed of one ongoing “rolling discussion” over the course of several hours, in which students would cycle in and out, participating in the discussion, leaving, coming back, going to the table, and getting organized. Revcoms took turns leading these discussions, cycling out every hour or two. Most times the discussion would have between three to eight people, and the largest it got was about 15 people at once.

One very striking thing about who we did cohere into discussions was the OPENNESS and broad radicalism/anti-capitalism. This wasn’t mainly developed, organized trends but more like large, unmolded, raw opposition to the system and what it does to people here, and around the world. This was different from what we have experienced at this campus before. We think it reflects a recognition of the outmodedness of this system (expressed through COVID, the 2020 uprising for Black lives, the election, fascism, etc.) even as this isn’t on a scientific foundation.

There was some important workshopping as we went in relation to leading the discussions in a way that was working to actually organize people all the way through—and there were still weaknesses identified about getting concrete about this.

Some of what was being workshopped as we went is identifying the importance of making clear from the beginning of the discussions that this is for the purpose of recruiting and bringing forward new organizers to then be able to organize others. One positive example of what came out of a discussion where that was done is after that discussion one woman and her friend went out to go get others and bring them back to the table to get into this. They came back and all joined another discussion.

Finally, it is important to note that there was a lot of attraction among students about the Constitution for the New Socialist Republic in North America—as one student put it, “Damn, no one ever has a real answer for what could replace capitalism. I want to read this!”

For the last 90 minutes of the outing, we dispatched a team to make announcements in other areas of the fair, and drive people to our main setup. We got out our flyers broadly doing this, and this caused some waves of people to come to our table to get more materials, and learn more. We had some more positive responses to these announcements, as well as a handful of hecklers and fascist-reactionary youth.

Things are really sharp in society overall, and many of these students and youth feel it, in one way or another.