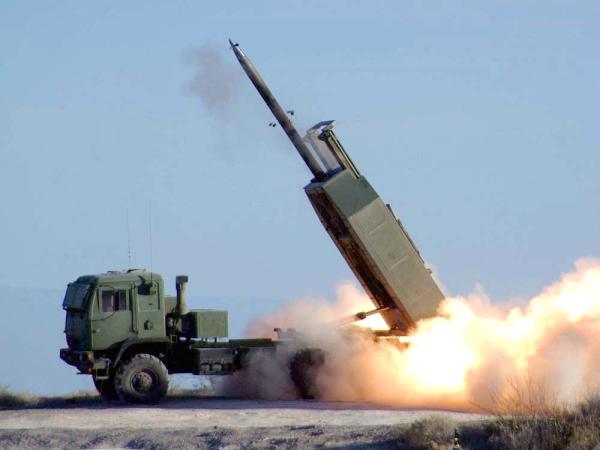 The HIMARS weapon system that the U.S. supplied to Ukraine.    U.S. Army

In the last two weeks, the war in Ukraine has moved into a more directly dangerous phase. The Ukrainian army—utilizing billions of dollars of U.S. arms—carried out a very successful offensive, taking back 2,000 square miles of land. The plans for this offensive were reviewed and in significant part changed and finalized by U.S. advisers, and advisers also played a role in operations. Go here to read our article earlier this week that goes into depth on this. And go here for deeper background on the war in Ukraine—including analysis that links this to the imperialist character of this system that rules both Russia and the U.S. itself.

This week the leader of Russia, Vladimir Putin, responded by mobilizing an additional 300,000 Russian reservists. He further said, in a major speech, that Russia would support referendums—scheduled to happen soon and initiated by forces loyal to Russia, in Ukrainian areas at this time occupied by the Russian military—to decide whether those areas would be stripped from Ukraine and officially made part of the Russian state.

Meanwhile, Ukraine is in the middle of an offensive in Kherson—one of the areas that these referendums are going on in. Putin said that “If the territorial integrity of our country is threatened, we will of course use all means at our disposal to defend Russia and our people.” “All means” implies the possibility of nuclear weapons.

He said the West has “resorted to the nuclear blackmail” including “statements made by some high-ranking representatives of the leading NATO countries on the possibility and admissibility of using weapons of mass destruction—nuclear weapons—against Russia.”

And he warned, “I would like to remind those who make such statements regarding Russia that our country has different types of weapons as well, and some of them are more modern than the weapons NATO countries have. In the event of a threat to the territorial integrity of our country and to defend Russia and our people, we will certainly make use of all weapon systems available to us. This is not a bluff.”

This is extremely dangerous.

What Bob Avakian warned of last spring, in WORLD WAR 3 AND DANGEROUS IDIOCY, is even more important now. He wrote that:

[H]ere is a crucial reality in relation to all this: In this war—where the Russian imperialists have invaded Ukraine, and on the other hand the U.S. imperialists (and their NATO “allies”) are backing and heavily arming Ukraine—both sides are deeply committed to a “win” in this situation. On the part of the U.S. imperialists, their aim, and what for them constitutes a necessary “win,” is to bring about a defeat of Russia in Ukraine and thereby significantly weaken Russia and its ability to challenge the dominant position of U.S. imperialism in the world. For the Russian imperialists, their objective is precisely to challenge that U.S. dominance, and a key and immediate aim is preventing Ukraine from joining NATO and ensuring that Ukraine does not become part of the U.S./NATO “encirclement” of Russia, which is already very far along (with a number of countries close to, or actually bordering on, Russia already members of NATO). With each side seriously committed to its objectives, and having become seriously involved in war in pursuit of these objectives (with Russia directly at war in Ukraine and the U.S./NATO now indirectly but deeply involved), this means that, so long as the terms are set by these contending imperialists, neither side can easily back down. (Again, so long as the terms are set by these contending imperialists, and the people, on all sides, do not effectively act, in their masses, in such a way as to force things onto different terms, which are in their interests, in opposition to those of the imperialists on either side.)

He goes on to conclude:

All this emphasizes why it is vitally important for the masses of people, in this country, and other countries aligned with it, as well as in Russia—for people everywhere—to finally and fully wake up now, recognize the real, and profoundly heavy, stakes involved, and act in accordance with our actual interests—the interests of all of humanity: demanding that this war in Ukraine, and the involvement (direct and indirect) of the imperialists on both sides in this war, be STOPPED, before it not only causes even greater suffering for the people of Ukraine but possibly escalates into a far more terrible conflict which causes massive destruction and death, on a whole other level, and even possibly poses a threat to the very existence of humanity itself.