From Rise Up 4 Abortion Rights on 50th Anniversary of Roe v. Wade:

We Must FIGHT for Legal Abortion On Demand & Without Apology Nationwide & Everywhere! 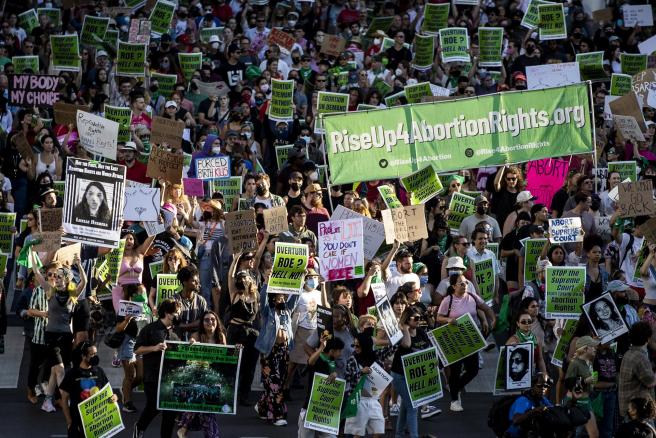 On the 50th anniversary of Roe v. Wade, we face the bitter reality that the fundamental, constitutional right to abortion has been brutally stripped away. That Roe v. Wade didn’t make it to 50 is a cause for grief, rage, reflection, and action. Forced motherhood is female enslavement, and half of humanity in this country—yes, all over this country—have become SECOND CLASS CITIZENS.

You’ve heard the heart-wrenching stories. The ten-year-old rape victim almost forced to give birth to her rapist’s baby. Women being brought to the brink of death from sepsis or bleeding out before they can get care for miscarriages or high-risk pregnancies. The desperate tears and pleas for help when patients expecting to get abortions were turned away from clinics the day Roe was overturned.

Think too of all the stories we haven’t heard: From those who desperately struggle to scrape up enough money to take time off from work, find childcare, and travel to states where a backlog of patients means they still might not get the abortion they so desperately need. From those tens of thousands who have already been forced to have children against their will. From those whose unwanted pregnancies trap them in abusive relationships or drag them further into poverty. This is a discriminatory dystopian misogynist reality that must never be minimized, tolerated, or accommodated to.

The attack on abortion rights is part of a patriarchal Christian fascist program that takes aim at contraception as well as LGBTQ rights. Denying the right to abortion hits poor women, and especially Black and other women of color, with vicious consequence—tightening the chains of both white supremacy and the subjugation of women. This is only the beginning: This fascist-dominated Supreme Court has opened the floodgates for states to pass more and more draconian laws to enslave and punish girls and women who dare to step outside their prescribed roles as mothers and breeders of children.

It is of great political and historical importance that Rise Up 4 Abortion Rights united people from very diverse political perspectives and unleashed the fury of tens of thousands of young women and many others in mass nonviolent action with the aim of stopping the Supreme Court from overturning Roe. In the end, the fight to save Roe did not reach the size, determination, or unity needed to win. But we modeled courage, inspired millions, and dared to speak the truth about what this rollback is really about.

The idea that we have to fight for women’s civil rights state-by-state only normalizes the concept of women's fundamental rights being based on local public opinion. Would you accept the right to free speech, or the right to vote, or the right to worship in only half the country? We demand legal abortion on demand and without apology everywhere!

The Right to Legal Safe Abortion Is the Front Line and the Bottom Line of Women’s Freedom.

As long as one woman or girl is not free, NONE OF US ARE FREE.

Our only way forward and our best way forward is to resist, to rise up. We urge everyone who cares about women and girls and justice overall to reach out to us to strategize and work together. There is a great struggle to be waged. Together, in our millions, we can and must ACT to win back the fundamental right to legal safe abortion.

The Illegitimate Overturning of Abortion Rights Must Not Stand!
Forced Motherhood = Female Enslavement
LEGAL ABORTION On Demand & Without Apology Nationwide!