THE CRIME: From the late 1960s well into the 1980s, documents show that the U.S. secretly organized, financed, and directed a campaign of political repression, torture, disappearances, and assassinations code-named Operation Condor. 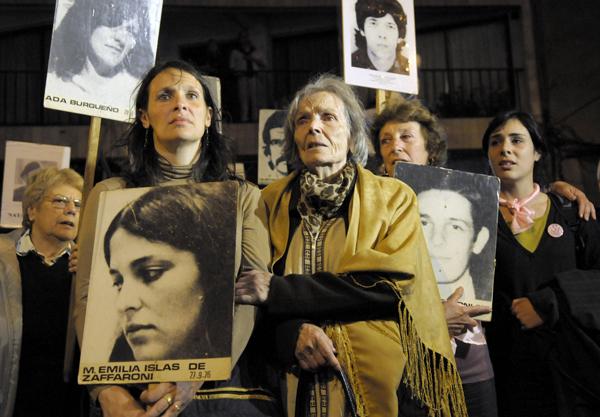 From the late 1960s well into the 1980s, documents show that the U.S. secretly organized, financed, and directed a campaign of political repression, torture, disappearances, and assassinations code-named Operation Condor. Above, Mariana Zaffaroni Islas, front left, standing next to her grandmother, holds a picture of her mother during a protest in Montevideo, Uruguay in 2009. Mariana's mother and father were kidnapped and murdered by the military in Argentina during the U.S.-backed military dictatorship there. Then, as a newborn, Mariana was given to an Argentinian military family to be raised. She was protesting the 1986 law which prevents members of the military to be judged for crimes committed during Uruguay's 1973-1984 U.S.-backed dictatorship. The law has yet to be fully overturned. Photo: AP

Starting in 1975, this multinational U.S.-led conspiracy was implemented by pro-U.S. right-wing military dictatorships in the Southern Cone of Latin America—Argentina, Chile, Uruguay, Paraguay, Bolivia, and Brazil (later joined by Ecuador and Peru). Operation Condor coordinated the intelligence operations between these countries; organized cross-border operations to detain and “disappear” dissidents and political opponents forced into exile; and, in its most secret “Phase III,” provided for the formation of special teams of assassins from member countries to travel anywhere in the world to carry out assassinations of “subversive enemies.”

In 1974, the CIA helped train and organize DINA, Chile’s secret police. DINA and its Argentine counterpart, SIDE, played leading roles in Operation Condor, along with the Colombian paramilitary Triple A—Alianza Americana Anticomunista.

They targeted dissidents and leftists, union and peasant leaders, priests and nuns, students and teachers, intellectuals and suspected guerillas, as well as former presidents and major politicians of opposition parties driven into exile following military coups. “Death flights” were widely used: military pilots took victims by plane or helicopter out to sea, dropping them to their deaths. In hundreds of cases, babies and children of parents kidnapped and murdered were given to military families and their allies.

The reach of Operation Condor was not limited to Latin America. In 1976, Orlando Letelier, Chile’s former defense and foreign minister under President Salvador Allende, was killed along with his American colleague, Ronni Moffitt, by a car bomb in Washington, DC. The order for his assassination came directly from Augusto Pinochet, the military dictator who took power following the CIA-orchestrated coup that overthrew and killed Allende.

Some estimates put the total number murdered as a result of Operation Condor at 60,000 or more.

The U.S. CIA and Military. The U.S. military and the CIA played crucial roles in the first meetings held to form Operation Condor. In the 1960s and early 1970s, under presidents Nixon and Ford, plans were developed among international security officials at the U.S. Army School of the Americas in Panama to work collectively in service of the U.S. strategy of exterminating the populist, revolutionary, and communist movements that the U.S. believed were sympathetic to the Soviet Union.

Manuel Contreras, the chief of DINA, Chile’s secret police, was a paid CIA “asset” from 1974 to 1977 (a year after Orlando Letelier was murdered in Washington), and was known as “Condor One,” the leading organizer and proponent of Operation Condor.

The U.S. Southern Command, (SOUTHCOM) the U.S. Special Forces, and the Army School of the Americas (SOA) were all involved in helping run Operation Condor. A 1976 U.S. Defense Intelligence Agency (DIA) report wrote that a Condor assassination unit was “structured much like a U.S. Special Forces Team.” 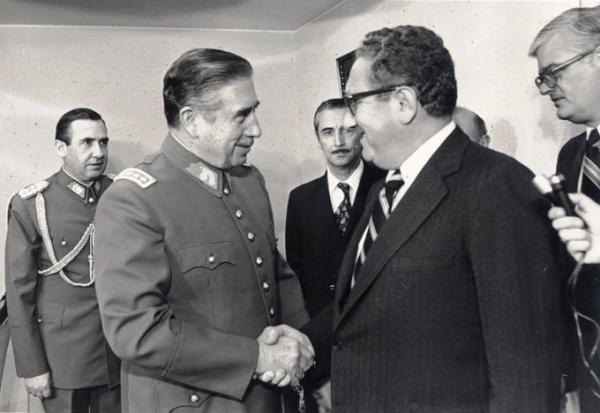 U.S. Secretary of State Henry Kissinger visits with Chilean dictator General Augusto Pinochet in 1976. Pinochet led the Chilean military to overthrow the elected government of Salvador Allende in 1973, a coup fully backed by the CIA. Thousands of Chileans were executed, tortured and "disappeared" under this regime. Declassified records show that Kissinger was briefed on Condor and its “murder operations” on August 5, 1976. Photo: Archivo General Histórico del Ministerio de Relaciones Exteriores, República de Chile

Henry Kissinger. From 1968 to 1976, Kissinger was national security advisor and then secretary of state under presidents Nixon and Ford. Kissinger brought high-level backing for Operation Condor to the CIA, the dictatorships of the Southern Cone, and directly for the crimes being committed. Declassified records show that Kissinger was briefed on Condor and its “murder operations” on August 5, 1976. Kissinger has been summoned but has failed to appear in courts in France, Chile, Argentina, and Uruguay for his knowledge and possible role in numerous assassinations under Operation Condor.

U.S.-Backed Dictatorship in Argentina. A court in Argentina convicted the country’s former dictator, Reynaldo Bignone, and 14 other former military officials of criminal association in the kidnapping, torture, and disappearance of 100 people, political refugees from neighboring countries. Jorge Videla, the general who ruled Argentina during most of the genocidal “Dirty War,” faced charges as well but died before the trial ended.

Other U.S.-Backed Dictatorships. In the decades following this period, the existence and crimes of Operation Condor have been forced into the light of day when courts in some of the other countries involved as well as international courts have put many of the dictators, heads of the military and death squads on trial for assassinations and mass murders. In one case, evidence brought by family members of victims of Operation Condor proved Chile’s Pinochet was responsible for 2,279 murders, and more than 30,000 tortured for political reasons.

THE ALIBI: In the face of anti-U.S. armed guerilla movements in a number of countries and massive popular opposition to reactionary U.S.-backed military juntas, the U.S. and its Latin American allies claimed they were fighting a continent-wide international “terrorist” conspiracy to foment revolution, aided by a pro-Soviet Cuba. They claimed they had no choice but to take “counter-terror” and “counter-subversive” measures to “eliminate Marxist terrorist activities.” They also claimed, as one Argentine general put it, that since “infiltration penetrates all levels of national life,” they were justified in targeting all manner of political opponents: trade unionists, relatives of activists, social activists such as the founders of the Mothers of the Plaza de Mayo, nuns, university professors, etc.

“We did worse things than the Nazis.”

“Look, our basic attitude is that we would like you to succeed. I have an old-fashioned view that friends ought to be supported.... The quicker you succeed the better.... We won’t cause you unnecessary difficulties.”

THE ACTUAL MOTIVE: To maintain U.S. imperialist domination of Latin America and counter-moves by the then-imperialist Soviet Union to extend its influence.

Dominating and exploiting Latin America—called the U.S.’s “backyard” by the U.S. rulers—has been crucial to the rise of the U.S. as a global imperialist power. By the 1960s, U.S. control was challenged by a global wave of national liberation struggles and an intensifying Cold War rivalry with the Soviet Union, which had become an imperialist power following the defeat of socialism in the 1950s. The revolution in Cuba in 1959, the failed U.S. attempt to trigger a coup at the “Bay of Pigs” in 1961, and the Cuban Missile Crisis with the Soviets in 1962—underlined these strategic threats to their domination of their “backyard,” as they saw it, coming from the Soviet Union.

In the context of these challenges, Operation Condor played an essential role. It was designed to eradicate communist or imperialist Soviet influence and ideas, and to suppress active or potential movements against pro-U.S. governments.