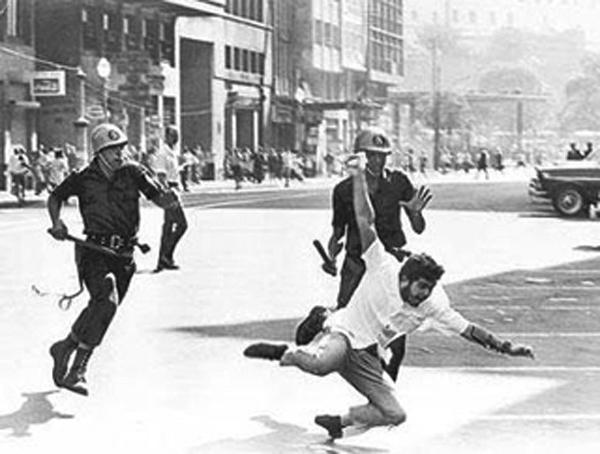 A protestor against the 1964 coup in Brazil is pursued by police.

THE CRIME: In 1964, a section of the Brazilian military carried out a coup that overthrew Brazilian President João Goulart. The coup gave rise to two decades of a murderous and brutal military dictatorship and atrocities that led to the disappearance and death of close to 1,000 political opponents, and the systematic torture of over 30,000 more.

The coup had been anticipated—and worked for—by the U.S. for two years or more. And the U.S. provided supplies and funding for the coup. Just before the coup, the U.S. ambassador to Brazil received a secret telegram from Secretary of State Dean Rusk stating that the administration had decided to immediately mobilize a naval task force to take up position off the coast of Brazil including U.S. Navy tankers, along with an airlift of 110 tons of ammunition and other equipment including “CS agent”—a special gas used against street protests. President Lyndon Johnson was briefed on and signed off on that. Goulart was unable and unwilling to mobilize armed resistance, and within days of the coup he fled to neighboring Uruguay. The U.S. immediately recognized the new regime, and declared that the coup by the “democratic forces” had staved off the hand of international communism.

The years of military dictatorships that followed led to the killing of hundreds of political opponents, possibly as many as a thousand. This includes a battle in the Amazon jungle where scores of left-wing rebels were slaughtered. The army used napalm, firebombs, and torture, and carried out orders to execute every single guerrilla captured alive.

In 2007, Brazil’s commission investigating this period reported that 280 different types of torture were inflicted on “subversives” at 242 clandestine torture centers, by hundreds of individual torturers—aimed at crushing opposition groups and intimidating and silencing any other opponents. Tens of thousands were rounded up and imprisoned and/or tortured during the years of military rule.

U.S. presidents Kennedy and Johnson: A month and a half before Kennedy’s assassination in November 1963, Kennedy held a two-day meeting with his cabinet where the developing war in Vietnam and political developments in Brazil were discussed. Here Kennedy openly discussed the option of overthrowing Goulart’s government.

President Kennedy, in October 1963: “What kind of liaison do we have with the [Brazilian] military?”... “We’ve got to do something about Brazil.”

President Johnson, days before the coup: “I think we ought to take every step that we can, be prepared to do everything that we need to do.” (Instructing his aides about U.S. support for the coup as the Brazilian military moved against Goulart on March 31, 1964.)

Continuing under Johnson, the U.S. carried out a systematic campaign to destabilize Brazil, covertly organizing opposition and street protests against Goulart. Meanwhile, they closely watched unfolding developments towards a coup. Johnson made clear to his advisers that the U.S. should do everything it could to assist the impending coup to make sure it was successful.

As the coup was about to be launched, Johnson authorized “Operation Brother Sam.” The U.S. military supplied arms, ammunition and gasoline for the coup, and was prepared to send combat troops if the overthrow of Goulart met with strong resistance. And a massive naval force was dispatched.

Dean Rusk and Robert McNamara, secretaries of state and defense under President Johnson: These architects of the genocidal war against Vietnam were also overseeing the covert activities that set the stage for the coup, and monitoring and directing the massive backup that was sent to prevent, and if necessary crush, any opposition to the coup that might arise.

Lincoln Gordon, U.S. Ambassador to Brazil: The U.S. “eyes and ears” on the ground, Gordon was involved in overseeing covert operations, and reporting on and assessing the developments towards the launch of the coup. 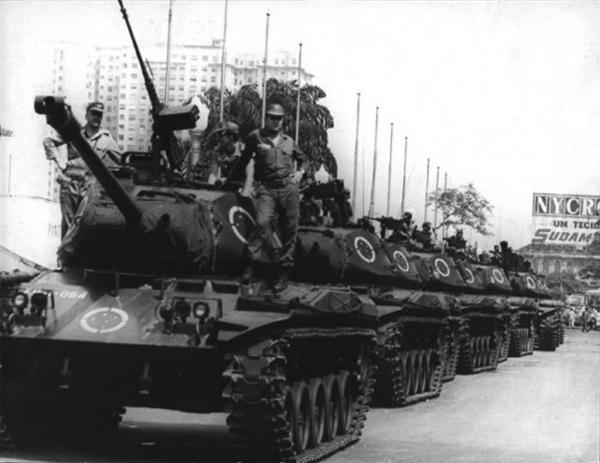 1968: The Brazilian military regime lined up tanks in the center of Rio de Janeiro in a show of force.

CIA Agent Dan Mitrione: Hundreds of Brazilian military and police officers were trained in torture techniques by the CIA—specifically, by agent Dan Mitrione. Mitrione had been an Indiana cop, an FBI agent, and an adviser for the CIA in Latin America. He taught police how much electric shock to apply to prisoners without killing them. This systematic torture was referred to officially as “Scientific Methods to Extract Confessions and Obtain the Truth.” Mitrione tested his torture techniques on street kids and homeless beggars from the streets of Belo Horizonte, Brazil. Torture included electric shocks growing in intensity and sessions of “pau de arara” (suspension from a rod by the hands and feet). Many of these techniques would be replicated across the region through the U.S.-sponsored Operation Condor that spread a reign of terror against dissidents and rebels throughout South America (see American Crime Case #87: Operation Condor 1968-1980s: U.S.-Directed Campaign of Political Assassination and State Terror in Latin America).

In 2008, a former police intelligence agent provided testimony suggesting João Goulart—who had been overthrown in the coup—had been poisoned by Condor operatives in 1976.

Henry Luce and TIME magazine: TIME magazine published positive reports on the activities of the military regime as it carried out the elimination of political parties, and the implementation of salary controls that increased the hardship among Brazil’s working class.

THE ALIBI: The Brazilian military and right-wing sections of the ruling class, together with the U.S. imperialists, justified the coup by portraying Goulart’s government as a “socialist threat,” instigated by international communism.

ACTUAL MOTIVE: While the Goulart government was no ally of Cuba, Lyndon Johnson saw its refusal to join in isolating Cuba, as well as efforts such as organizing peasants in northeastern Brazil, as signs of a “leftist” government that couldn’t be tolerated.

For the U.S., stability and control of its “own backyard” has always been essential to maintaining its domination elsewhere in the world. Following World War 2, the struggles for national liberation developing in different parts of the Southern Cone of Latin America, given encouragement and support by the Cuban revolution and often aligned in some way with the Soviet Union, posed a strategic challenge.

The Brazilian coup came in the early stages of what the U.S. military saw as the necessary response—the development of a coordinated, regional counterinsurgency force, and strategy, capable of carrying out assassinations of guerrilla resistance fighters and their political allies anywhere in the region. In many ways, Brazil became a “model” for the other U.S.-backed military dictatorships that followed.