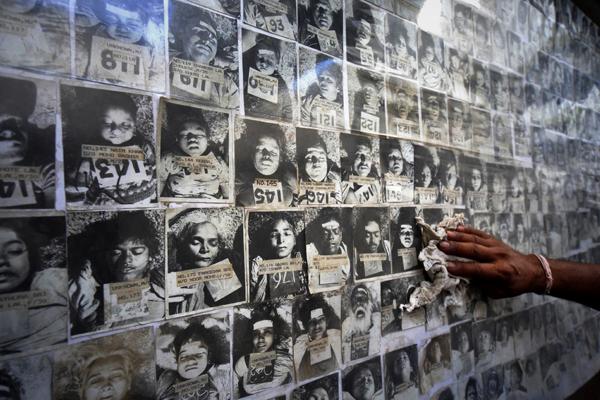 Some of the thousands who were killed by poison gas from the Union Carbide pesticide plant in Bhopal, India on December 3, 1984. (AP photo)

Shortly after midnight, early Monday morning on December 3, 1984, an explosion took place at the Bhopal, India, plant of the Union Carbide Corporation, a U.S.-based multinational. A tank containing methyl isocyanate (MIC), used to manufacture pesticides, exploded, blowing 40 tons of deadly chemicals into the air. Within moments, a poison cloud enveloped much of this city of 900,000.

In the densely-packed shanty settlements around the plant, thousands were awakened by the suffocating, burning effects of the gas, or by the howls of dying animals. The toxic cloud stayed close to the ground, so thick people were nearly blinded as they rushed to escape. Some vomited uncontrollably, violently seized, and fell dead. Gas spread over 40 square kilometers (15.4 square miles). Over 200,000 people were immediately impacted; half the city was driven from their homes.

The plant’s management did not immediately sound the alarm or alert local authorities. They later assured reporters that MIC was an “irritant,” not a deadly poison. To this day Union Carbide has refused to say what exploded from its plant. It was an extremely deadly brew of poisonous and carcinogenic chemicals. 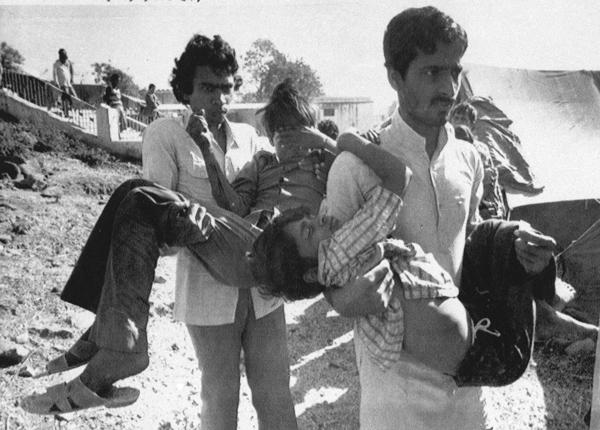 Children blinded by the poison gas leak at the Bhopal, India Union Carbide plant are carried to a hospital. It was the deadliest industrial disaster in history, with hundreds of thousands of people in the surrounding area still suffering serious health disorders. The water and environment in Bhopal are still contaminated. (AP photo)

The effects of the December 3 explosion and the massive amounts of toxic materials remaining on the Union Carbide site are still contaminating Bhopal’s water supplies and environment.

Bhopal was the deadliest industrial disaster in history, and it’s still crippling and killing.

Union Carbide Chairman Warren Anderson denied any responsibility for the gassing: “The corporation did nothing that either caused or contributed to the accident.” The corporation claimed the gas eruption resulted from either deliberate sabotage or violation of procedures by its subsidiary, Union Carbide of India Limited and its Bhopal personnel. (Union Carbide never produced any evidence of sabotage.) Anderson insisted safety was a global priority: “Our safety standards in the U.S. are identical to those in India or Brazil or someplace else…Same equipment, same design, same everything.”

According to Union Carbide, the Bhopal catastrophe didn’t reveal flaws in their manufacturing processes, design, engineering or safety measures. The problem, they said, was India’s “cultural background or basic educational level simply cannot support the ongoing operation of sophisticated technologies.”

Union Carbide and the U.S. media argued that it and other Western corporations were a force for good in India, modernizing its agriculture and increasing food production: “Without the technologies and the capital that multinationals help to introduce,” Anderson said, “developing countries would have little hope of eradicating poverty and hunger.”

The deadly Bhopal explosion resulted from a series of decisions made by Union Carbide U.S., which owned, designed, and controlled its Bhopal operation.

This system and those who rule over it are not capable of carrying out economic development to meet the needs of the people now, while balancing that with the needs of future generations and requirements of safeguarding the environment. They care nothing for the rich diversity of the earth and its species, for the treasures this contains, except when and where they can turn this into profit for themselves....These people are not fit to be the caretakers of the earth.

Union Carbide knew MIC was highly toxic and reactive, but chose to store it in 15,000 gallon tanks rather than smaller and safer, but costlier ones. So when water entered an MIC tank on December 3, it triggered a violent chemical reaction and massive explosion. Carbide lied when it claimed Bhopal’s safety systems were identical to its U.S. plant in West Virginia, and that the problem was Indians couldn’t handle “sophisticated technologies.” Bhopal didn’t have adequate detection instruments. Safety and containment systems were under-designed, and able to handle only small leaks. Many had been shut down to cut costs, even though company reports in 1982 and 1984 warned of danger at Bhopal including water triggering a “runaway reaction in the MIC unit storage tanks.”

Union Carbide’s decisions at Bhopal were guided by maximizing profits and its advantage against global competitors, with deliberate disregard for safety. It created a horror waiting to happen, with hundreds of thousands unknowingly in grave danger.

The much proclaimed benefits to India’s agriculture and living standards from investment by the West and Union Carbide didn’t happen for the vast majority. Agricultural output was raised, with some farmers prospering, but millions of small ones were ruined. India’s agriculture became more oriented to the world market, not producing its own food, and more dependent on Western imperialist technology.

Union Carbide Corporation and Chairman Warren Anderson. Anderson was arrested and charged with homicide when he traveled to India after the disaster. He was quickly released on bail due to U.S. pressure. He left India and never returned.

Union Carbide never accepted responsibility for Bhopal and refused to face trial in India. In 1989, Carbide negotiated a $470 million settlement with the Indian government. This included roughly $2,000 for those initially killed, and $300 to $500 for the injured—covering only a few years of medical expenses, even though many suffered lifelong damage.

The Constitution for the New Socialist Republic in North America (Draft Proposal) from the RCP is written with the future in mind. It is intended to set forth a basic model, and fundamental principles and guidelines, for the nature and functioning of a vastly different society and government than now exists: the New Socialist Republic in North America, a socialist state which would embody, institutionalize and promote radically different relations and values among people; a socialist state whose final and fundamental aim would be to achieve, together with the revolutionary struggle throughout the world, the emancipation of humanity as a whole and the opening of a whole new epoch in human history–communism–with the final abolition of all exploitative and oppressive relations among human beings and the destructive antagonistic conflicts to which these relations give rise.

Read the entire Constitution For The New Socialist Republic In North America (Draft Proposal) from the RCP at revcom.us.

Union Carbide had exploited India’s poverty, paying Bhopal workers $3.75 a day. Then, after killing and injuring hundreds of thousands, it cited India’s extreme poverty as justification for settling for a pittance compared to what it would have paid out for a similar disaster in the U.S.

The 1989 settlement didn’t address environmental damage. “Union Carbide simply walked away,” Amnesty International reports, “leaving the ticking time bomb that was the polluted factory site behind them, poisoning drinking water for many miles around.”

U.S. government, World Bank, Ford Foundation and other Western institutions. All pushed for greater Western investment and radical changes in Indian agriculture—the so-called "Green Revolution"—which fostered pesticide production in India, including at Bhopal. This was done to serve the economic, political and strategic interests of the U.S. empire. After Carbide’s gas massacre at Bhopal, the U.S. government and legal system refused to allow the victims to sue in U.S. courts, refused to hold Carbide responsible for human or environmental damages, and refused to extradite Warren Anderson to face trial in India.

Indian Government. It collaborated with the West in pushing the “Green Revolution,” and never ensured safety, including at foreign-controlled operations. After the Bhopal massacre, its priority was maintaining relations with foreign investors, not justice for Carbide’s victims. It agreed to Union Carbide’s paltry settlement, did not press U.S. courts to hear the case, and did not start extradition proceedings against Warren Anderson. Only eight Union Carbide of India managers were ever convicted, on charges of “death by negligence.” They were sentenced to two years in jail and fined $2,125. They’re appealing.

To this day, people in Bhopal, with support from around the world, continue to fight for justice, health care, relief, and environmental repair.

“Living in the Shadow of the Bhopal Chemical Disaster,” Mother Jones, June 2, 2014

“The Bhopal disaster and its aftermath: a review,” U.S. National Institutes of Health’s National Library of Medicine, May 10, 2005

“The Bhopal Disaster, Yesterday and Today: A System of Mass Destruction,” A World to Win News Service, February 14, 2005