For All Those Telling Us to Dig In For a Decades-Long, Gradual Struggle to Preserve a Woman’s Fundamental Right to Control Her Own Body

Question One: What kind of system is it where one party that rules over you passes a law that literally unleashes swarms of bounty hunters and snitches who can shut down abortion clinics for cash money reward—while the other party tells women to accept that your rights are gone, maybe your life is over, but get over it—it’s going to take decades to turn this around through elections?

Answer: One that poses a mortal threat to every woman of child-bearing age.  And one that nobody should have to live in.

On September 3, the day after the Supreme Court let stand a fascist Texas law that effectively outlaws abortion, the editors of the New York Times—writing of this law, and of the likelihood that the Supreme Court will further gut and perhaps totally repudiate the Roe v. Wade decision  that constitutionally guarantees the right to abortion—advised people to effectively give up hope that the right to abortion can be preserved.

Any long-term success will mean fighting the same way anti-abortion campaigners have for decades—in the political realm, by winning elections at the state and federal levels and changing laws as a result…. It's a long and difficult road, but it’s the one all lasting reforms in a Democracy must take. [emphasis added by us]

Question: How many women is the New York Times willing to sacrifice for the decades that so-called lasting reform must take?

How many will die trying, throwing themselves down stairs or falling into the hands of quacks, back alleys or internet scams? What will happen to the majority of women who need an abortion but cannot afford a trip to another state? How many teenagers will find their first romantic experience turns into an unplanned pregnancy and dreams deferred for a lifetime? How many women who are raped or the victims of incest will be forced into motherhood against their will just as the rape was against her will? How many children will be shuffled through a broken and brutal foster care system, because of a Christian theocratic movement that was never about “babies”—and was always about controlling women?

Answer: Lives counted in decades worth—but that’s not even the half of it if a crime against half of humanity is legitimized as the way democracy works.

Last Question: What kind of system would even put a woman’s right to control her own reproduction—her own bodily autonomy—up for a vote?

And Final Answer: One that needs to be overthrown and replaced with a radically different one where a new state power gives backing and force to the struggle to carry all the way through to the emancipation of women as elemental to emancipating all humanity. With a Constitution that would from the outset ensure this right—as it is ensured in the Constitution for the New Socialist Republic in North America, authored by Bob Avakian, where it is clearly stated that:

[T]he New Socialist Republic in North America gives the highest priority not only to establishing and giving practical effect to full legal equality for women—and to basic rights and liberties that are essential for the emancipation of women, such as reproductive freedom, including the right to abortion as well as birth control—but also to the increasing, and increasingly unfettered, involvement of women, equally with men, in every sphere of society, and to propagating and popularizing the need for and importance of uprooting and overcoming all remaining expressions and manifestations of patriarchy and male supremacy, in the economic and social relations and in the realms of politics, ideology and culture, and to promote the objective of fully emancipating women and the pivotal role of the struggle for this emancipation in the overall transformation of this society and the world as a whole. (p. 76)

You can’t reform a capitalist system that has patriarchy built into it and is dependent on it for its basic functioning. YOU NEED A NEW STATE POWER IF YOU WANT WOMEN TO FINALLY BE FREE. 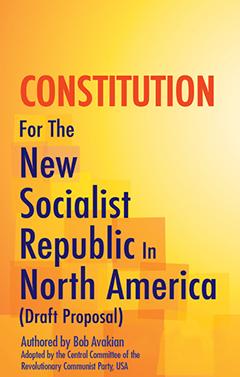 Authored by Bob Avakian Adopted by the Central Committee of the Revolutionary Communist Party, USA