Behind the Week of Internet Attacks on Bob Avakian and the Revcoms: Imperialist Fear Mongers and Their Servants

Last week, three very different news outlets—the Daily Beast, The Intercept, and the Daily Caller—launched three very similar attacks on Rise Up 4 Abortion Rights, the Revcoms and Bob Avakian. The Daily Beast is a mainstream liberal outlet; The Intercept is more of a so-called “progressive” one; and the Daily Caller is straight-up fascist. Yet each had the scare phrase “communist cult,” or words to that effect, in the headline. Each repeated baseless, libelous and potentially very dangerous charges against Bob Avakian, as well as Sunsara Taylor, who co-initiated Rise Up and is a follower of Bob Avakian. Each misrepresented and distorted the origin, mission, makeup and activities of Rise Up 4 Abortion Rights and the role of the Revcoms within it. And, of course, all this has since widely spread across the internet, where the standards for truth too often range from poor to nonexistent.

The attacks on Rise Up 4 Abortion Rights are important in their own right and have been ably refuted by representatives of that organization here and here. Rise Up played a singular role in actually mobilizing people to fight back against, rather than meekly submit to, the ripping away of abortion rights; apparently their greatest sin has been to bring thousands of brand-new people into active resistance around this question, and apparently for this they are now to be shunned, in some medieval style cancel-culture ritual. This must not be allowed!

But in this article we want to hone in on what has increasingly become the focus—a truly venomous attack aimed at Bob Avakian.

All that may just be a matter of convergent world outlooks—or perhaps cosmic coincidence. But here it does have to be said: the way in which these articles appeared rapid-fire in a mainstream liberal publication, then a “progressive” one, and finally a fascist one is striking. The way in which they spread through every corner of the internet so quickly—also striking, and very dangerous. For anyone who knows anything about the history of repression in this country, it should call to mind some of the ways that the FBI was revealed to have planted stories in the press in its efforts to destroy leaders and followers of the revolutionary movement and revolutionary organizations of the 1960s (see here and here).

The Overturning of Roe: A Major Rip in the Social Fabric with Unpredictable Consequences

We also know that the decision overturning Roe is a profound leap on the part of the fascist section, and it is already leading to the further and more acute ripping apart of society as a whole. Bourgeois commentators are widely observing that this is “unsustainable,” on the terms of the ruling “norms” that have held this country together for generations, since the end of the Civil War. It is neither accidental, nor frivolous, nor hyperbolic, when even “establishment” scholars and commentators compare this to the Fugitive Slave Act and the Dred Scott decision and make analogies to the 1850s (even as these same observers generally fail, or refuse, to follow the logic to its logical conclusion). It is highly unlikely that at least the higher level functionaries and operatives of those rulers opposed to imposition of outright fascism (mainly those grouped around the Democratic Party leadership)—however much they try to “calm things down” and direct them into the “normal channels”—are unaware of the profound implications of all the kinds of jolts and tears that this represents and portends to the social fabric.

The Revcom document “Organizing for an Actual Revolution: 7 Key Points” lays out why a revolution is needed, why these times pose not only acute danger but the possibility of making such a revolution, and what must urgently be done to build the movement of millions to make that revolution. That document puts it this way:

The crisis and deep divisions in society can only be resolved through radical means, of one kind or another—either radically reactionary, murderously oppressive and destructive means, or radically emancipating revolutionary means. And this resolution could quite possibly happen, one way or the other, within the next few years. This rare situation, with the deepening and sharpening conflicts among the ruling powers, and in the society overall, provides a stronger basis and greater openings to break the hold of this system over masses of people. In a situation like this, things that have basically remained the same, for decades, can radically change in a very short period of time.

Hard to imagine? Think again. In such times, when there is a major gash in the fabric of society and millions of people begin to question and raise their heads, as began to happen with the overturning of abortion rights, what seemed improbable or even impossible yesterday can suddenly become a very palpable possibility. With multiple intensifying crises, with the increasing aggression of the fascists… how many more such jolts are in store?

And it is precisely at this time that they are attacking BA. Ask yourself, why? And why are they doing it in a way designed to stigmatize any engagement with these ideas, or the people taking them up? And—very importantly—why are they doing this in a way that attempts to isolate Bob Avakian?

The Overriding Importance of Leadership and BA in Particular

At a time of sharp change—one way or the other, reactionary and murderous or revolutionary and emancipating—leadership is decisive. It should be very clear that not only those who have carved out a little niche in this society, but infinitely more so those who run this society would feel threatened by leadership that did have a revolutionary orientation, a viable strategy for an actual revolution and a compelling vision of what comes next, a method for people to understand and transform society, and a bone-deep feeling for the people themselves. That leadership is Bob Avakian.

Exactly how the attacks of the last week came to follow each other in such rapid-fire order is not as important as what they serve—and what they demand of anyone who is agonizing over the direction of society. It would be worse than foolish to expect that these are over; this particular angle of attack may or may not continue to take the same form, but there is clearly a fight on about this leadership. Those clinging to and defending the old order, be they fascist or the “liberal” representatives of capitalism-imperialism, know that.

But there is positive potential, even within this very serious attack. Those who hunger for a better world, who are revulsed by the future represented by the overturn of Roe, need to understand that too. Neither side of the divide of the rulers of this system has any real answers to this horrific future now bearing down on humanity. And this very attack is done out of weakness and fear of the real potential for revolution and for this revolutionary leader to connect with millions of people at this time who are desperately hungering for something different. 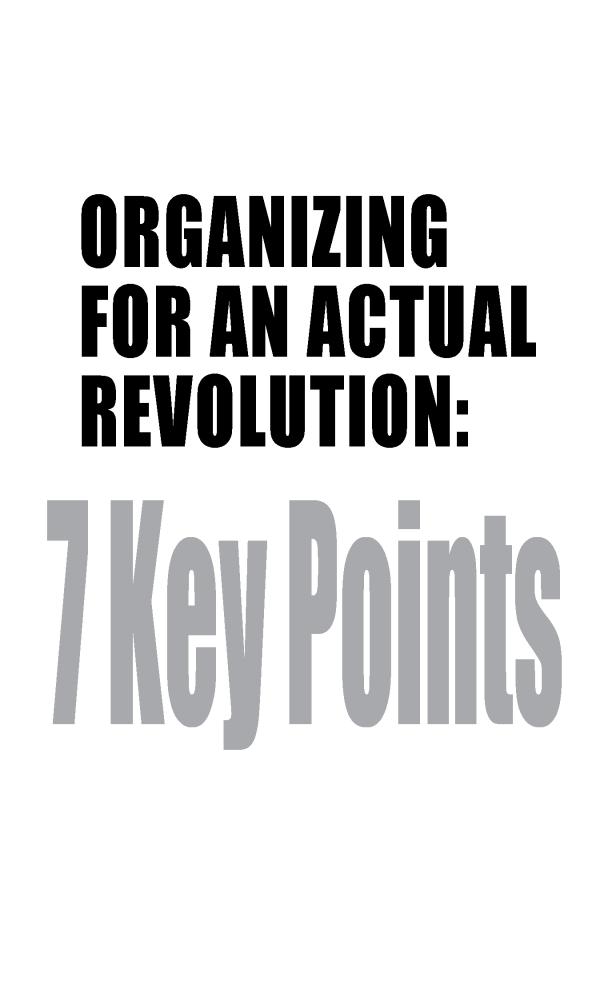