In This World of Cruel Inequality and Fascist/Anti-Science Governments: 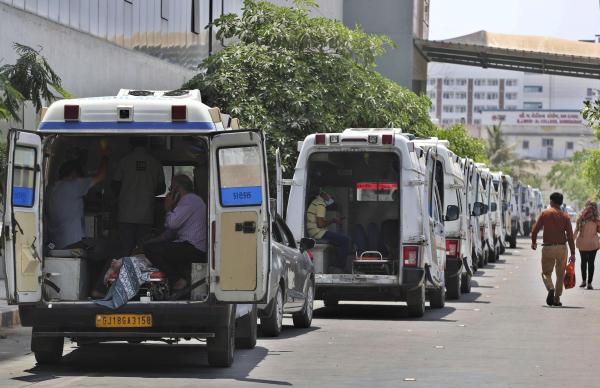 The health care system in India has broken down, with hundreds of people lined up at hospitals waiting for beds, dozens dying waiting in line. Here in Ahmedabad, ambulances carrying patients line up to be received at a government hospital, April 2021.    Photo: AP

A new wave of COVID-19 is washing across oppressed and impoverished countries, with total new infections worldwide doubling in the last two months.

The pandemic is now hitting hardest in India, followed by Brazil and its neighbors in South America. In fact, virtually all of the “global South”1 is vulnerable—first and foremost because most have been denied access to COVID vaccines.2 And, as the New York Times says about India, “Hundreds of millions of poor people live cheek by jowl, easy targets for a highly contagious virus. India has long neglected public health, spending less than $100 per capita per year.” This also describes the conditions facing billions of people elsewhere in this world of slums.

On top of this, new variants of the virus—more contagious and/or more deadly and/or more resistant to vaccines—keep popping up, and will continue to do so as long as billions of people worldwide are unable to get vaccinated.

So what is actually happening, and why? Here we will focus on India, but much of this applies to South America as well.

India has recently been confirming over 400,000 new COVID infections per day, and the real number may be 10 times as high, since the vast majority of people do not have access to testing... or to medical care at all.

The health care system in India has broken down, with hundreds of people lined up at hospitals waiting for beds, dozens dying waiting in line. Even the more privileged cannot get a bed and are frantically “crowdsourcing” online, trying to find oxygen tanks for severely ill loved ones. In Gujarat a crowded hospital caught fire, killing at least 18. In a Maharashtra hospital, the oxygen system broke and at least 22 patients suffocated. Doctors and nurses are heroically working long hours and are near or past physical and emotional collapse. A doctor reported: “No doctor has retreated from the front lines. We are fighting missiles with sticks but we are not leaving the fort.”

The official death toll is now over 4,000 a day, but again, this is a vast underestimation. During 13 days in mid-April, the city of Bhopal reported 41 deaths. Reporters surveyed cremation and burial grounds and found the real figure was over 1,000!

Cremation is traditional for India’s Hindu majority, but people are dying so rapidly that the iron grates on which the bodies are placed are melting from the heat. The fires burn 24-hours a day, “a never-ending assembly line of death.” The official death toll in India from the pandemic so far is 215,000, but the real figure is likely over one million.

And why? On top of the imperialist-imposed conditions discussed at the start of this article, India also suffers under the rule of its Hindu-fascist prime minister, Narendra Modi. Modi’s form of fascism wraps itself in Hindu fundamentalism, and denigrates science. When earlier waves of the pandemic ebbed last fall, his party (the BJP) declared that India had “defeated Covid under the able, sensitive, committed and visionary leadership of Prime Minister Shri Narendra Modi.” When cases started rising again, Modi denied there was a need to take serious measures. India’s COVID task force didn’t even meet for four months. A leader of the BJP was videoed feeding cow urine to a COVID patient on a ventilator (cows are considered sacred in Hinduism, and fundamentalists claim their urine and dung are cure-alls).

As infections soared, Modi allowed a Hindu religious festival attended by millions to go on, and he himself actively held giant mass rallies as part of elections in the populous state of West Bengal. At many of these, Modi and most of the crowd wore no masks. Laboratories in West Bengal now report a staggering 50 percent infection rate. 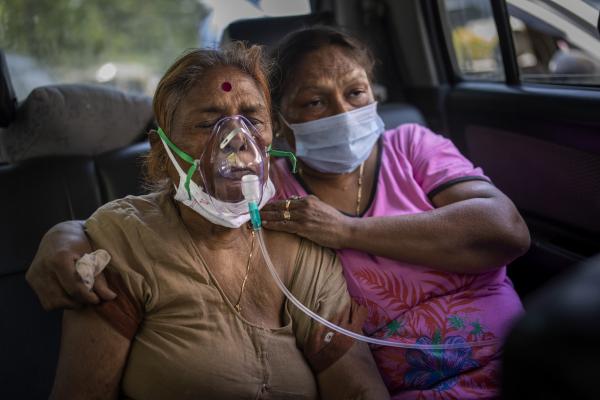 The shortage of medical oxygen for severely ill has become so dire that people “share oxygen tanks” while waiting in borrowed cars for a hospital bed.    Photo: AP

South America faces a similar crisis, spreading out from Brazil, the largest and most populous country in the continent. Brazil is ruled by Jair Bolsonaro, another fascist leader and a close ally of Donald Trump. Like Trump, Bolsonaro repeated claimed that COVID was just "a little flu" and that Brazilians were naturally immune to it, and he promoted hydroxychloroquine as a cure. Now not only is Brazil being severely walloped, but a new and exceptionally dangerous variant—P.1.—has emerged there and spread to neighboring countries, worsening the problems in Peru, Colombia, Uruguay, Venezuela, Argentina, and other countries. Death rates are soaring, and the head of a major hospital in Medellín, Colombia, says that this third wave of disease is not the end: “The fourth peak and fifth peak will come.”

1. “Global South” is a term for countries of Africa, Latin America, and Asia, where a large majority of the world’s people live. Most of these countries are oppressed and exploited by the wealthy imperialist powers of North America, Europe, China, and Japan. [back]

2. See “U.S. and Other World Powers Hoard COVID Vaccines” at revcom.us. In India fewer than one person in 50 is fully vaccinated; in South Africa, less than one in a hundred. And this is in spite of the fact that these countries host pharmaceutical factories that are major producers of the world’s vaccine supply. [back] 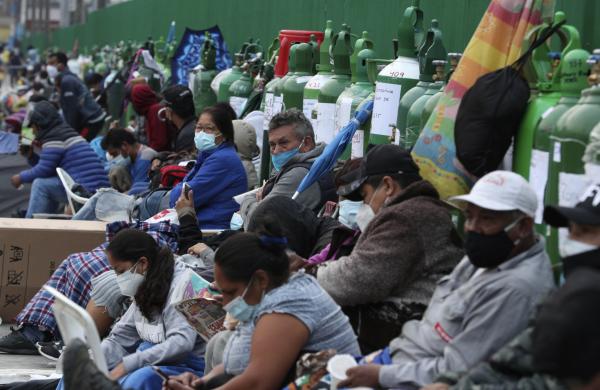 The pandemic is causing tremendous suffering to people in Peru. Here people sit by their empty oxygen cylinders, waiting for a refill shop to open in Lima, February 2021.    Photo: AP

Up Against COVID, Poverty, and the Oppressive Government in Peru

On top of the direct effects of the disease, the pandemic is causing tremendous economic suffering to tens of millions who were already living on the edge, and even some who had managed to eke out a little stability. The New York Times reported on Rafael Córdova, a 50-year-old Peruvian and a father of three who had been working as human resources director of his town, but lost his job when he got COVID. The Times encountered him among thousands of desperate people who had occupied and camped on vacant land in the southern part of Lima, the capital.

The Times reports that Córdova:

now struggles to pay for minutes on the one family phone so that his children can do class work. Meals are small. Debts are mounting. “Today I went to the market and bought a bag of fish bones and made soup,” he said.

... In June, his wife, who had also had Covid, gave birth to twins prematurely. One daughter died days after birth, he said, and the second died about a month later. He had no money for a proper burial. “I left the hospital with my daughter in a black plastic bag and got in a taxi and went to the cemetery,” he said. “There was no Mass, no wake. No flowers. Nothing.”

When he heard about the [land] occupation, he said he was three months behind on rent and feared eviction. So he made a run for the hill, pitching a tent that became his new home. “The only way they’ll get us out of here,” he said, “is if we’re dead.”

A week later, the police arrived, set off tear gas—and booted him and thousands of others from their camp.

The Coronavirus Pandemic — A Resource Page 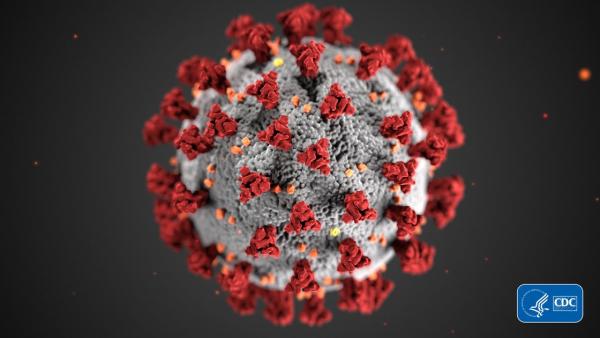 What You Will Find on This Page: