Prisoners’ Blood on Hands of the Islamic Republic 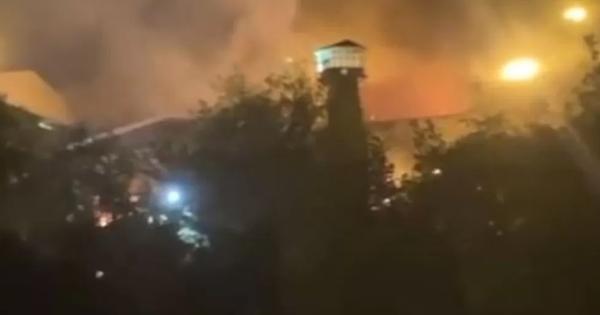 As we write on Sunday, October 16, 11 pm EDT—on Saturday evening, a massive fire broke out at Tehran’s Evin Prison. Videos posted on social media show flames and smoke shooting up, billowing in the air, punctuated by the sound of gunfire and explosions.

Other videos show widespread outrage and alarm, with roadways packed with families trying desperately to get to the prison to find out the fate of their loved ones and come to their aid, as well as people in the neighborhood protesting the regime.

“Families of inmates outside the prison were tear-gassed earlier in the day Saturday, and roads heading there were blocked by nightfall…. Videos posted online showed people in neighborhoods around Evin chanting ‘Death to the dictator,’ while others showed riot police on motorcycles heading to the prison,” the Washington Post reported.1

Beyond this, little is known with certainty at this writing. Information is scattered, and just beginning to come out—largely from the regime and prison officials—and mostly not verifiable.

The Islamic Republic, infamous for its sordid record of lies, deceit and coverups, claims the fire was not connected to the wave of protests sweeping Iran, but was instead started by prisoners. Officials say the fire is now out and that eight prisoners died of smoke inhalation and another 61 were injured. Other Iranian media outlets are disputing elements of the regime’s story, including reporting that prison guards assaulted and shot at prisoners trying to escape the smoke and flames. Apparently, Wards 7 and 8 of Evin, which house labor activists and recent arrestees from the mass protests that have rocked Iran, were the most seriously affected by the fire.2

What Can Be Said with Certainty: The Blood of the Prisoners Is on the Regime’s Hands!

Revcom.us will be investigating and reporting further on this horrific outrage.

But what can be said now with absolute certainty is that Evin itself is a crime against humanity—a notorious center of torture, abuse, denial of legal rights, and executions, including mass executions.3

It can be said that it is an outrage and yet another crime of this regime that such a fire could even happen and potentially threaten the lives of the prisoners, including hundreds of political prisoners—including labor, women’s, and human rights activists; dissident intellectuals and artists; protesters and revolutionaries; and members of religious and oppressed minorities.

It can be said that the blood of the prisoners who have died or been injured is on the hands of the barbaric Islamic Republic of Iran and that this is yet one more reason why this regime must be overthrown through revolution—nothing less—at the soonest possible moment.