Revcom.us editors’ note: We have been highlighting key statements of the Communist Party of Iran (Marxist-Leninist-Maoist). Their publication, Atash [English translation: Fire], features many more articles in Farsi which are very timely, and we encourage readers to check it out. As an example, we are featuring this article, which we also think important to share with readers. This is an unofficial translation from Farsi by Revcom.us volunteers.

The title “Goodbye Garbage!” is a sarcastic reference to “Hello Commander,” a song praising Ayatollah Khamenei (Iran’s “supreme commander”) that schoolchildren in Iran have been required to sing. Explanatory notes have been added in brackets.

With the murder of Mahsa Amini by the Islamic Republic’s hated murder patrol, thousands of people rose up in dozens of cities and provinces, and Iran is once again witnessing a massive, widespread popular uprising. But this is a qualitatively different event from the magnificent popular uprisings of the last few years. This is the beginning of a situation that could lead to the overthrow of the Islamic Republic.

This is a revolutionary movement which has women at its center, and especially the young, rebellious and defiant women and men—a movement that so far has made unparalleled social and historical gains: 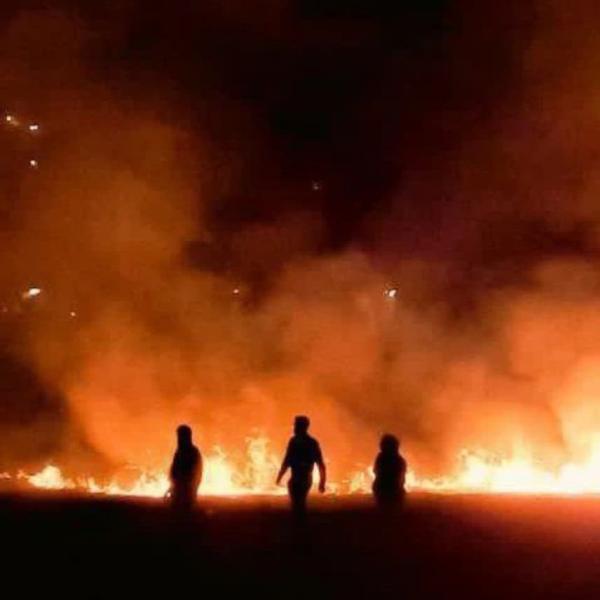 We saw volcanic flames of anger and empowerment in the proud scenes of recent days. The start of a revolutionary process does not ensure its inevitable victory. The victory or defeat of this revolution depends on various factors. The key issue is that this time it should not be allowed be diverted, which is what happened in 1979, and during the Arab Spring [2011]. This revolutionary movement didn’t happen spontaneously, and it will not succeed spontaneously.

The revolutionary process taking place in Iran today, including the pioneering role played by women and the participation of many of different elements of the society, is the result of a variety of factors and contradictions. But ultimately, this revolutionary process has been brought about by two interrelated factors:

The first factor is the nature and workings of the system itself, which has disgusted the masses of people and caused them to despise it.  It does not matter what the majority of people or a significant portion of them think of it at a given moment, or that they lean towards “reform and moderation,” and say “we are not political,” and have religious and petty bourgeois illusions about a “peaceful movement.” What matters is that the very workings of the capitalism system inflict exploitation, oppression and discrimination in various forms on the vast majority of society. This dynamic has provoked the people’s animosity and rage that can lead to uprisings, and revolutionary upsurge.

Second, the forty-odd years of resistance against this regime—from the five-day uprising  of women against imposition of the compulsory hijab (that began on March 8, 1979) and the 1980 battle of Kurdistan,  to the 1981 Sarbedaran-led uprising in Amol,  and the armed struggles of the 1980s;  from  the thousands of men and women the IRI executed in 1988  and the ongoing civil and political resistance of women against the hijab right through to the January 2018 and November 2019 uprisings—resistance that was carried out in different ways by society as a whole and by women in particular. [Sarbedaran was a revolutionary communist organization, a forerunner of the CPI-MLM.]

It is an important factor that the flame of resistance in this society, even if small and a minority sector of the society, was never extinguished. Parts of the society and people continued to oppose the entirety of the Islamic Republic, regardless of the countermeasures the enemy employed, from the executions of the 1980s to the massacre of 1988, to the miserable reform and moderation project. We fought many times in this battle, we took on the enemy and gave our lives; we were imprisoned, tortured, executed, defeated and we rose up to fight again. But this time we must move forward with the vision of victory on the horizon.

One cannot predict what will happen to this revolutionary process, but one thing is clear:

Until the victory of a real revolution, a protracted battle with ups and downs lies ahead of us.

We, the revolutionary communists, and progressive forces—human rights defenders, intellectuals,  political activists—must expose illusions being incited by some opposition groups such as “take the quickest path to settlement” with the Islamic Republic, and stand against the guidelines they issue to the movement with the support of institutions in imperialist governments and regional regimes.

The struggle to overthrow the Islamic Republic on a basis that ultimately will benefit the people is a protracted battle. It is improbable that there will be a repeat of the scenario where a hasty compromise is reached, as happened in 1979, when a deal for regime change was brokered by global powers. This is due to a variety of factors, but mainly the disintegration of unity among world powers. Unlike 1979, there's no Guadeloupe where the Western imperialists can sit at a round table. [Guadeloupe is a French island in the Caribbean where in 1979 the leaders of five Western imperialist countries brokered a way for Khomeini and his Islamist allies to reconcile with the military of Iran.]

Actual revolution must root out the entire existing system, the capitalist system and mode of production, because the system’s very nature and functioning produces and reproduces all forms of exploitation and oppression, including the oppression of women.  In any capitalist society,  it is the state that enforces this system, a dictatorship of the capitalist class. In Iran, that state is in the form of an Islamist superstructure. [The superstructure consists of the government, military, morality police, courts, media, mosques and schools, etc.] In order to eliminate the source of all forms of oppression and exploitation, to bury the veil and oppression of women, to eradicate poverty, misery and hunger, to eliminate national oppression and cultural and political tyranny, to save the environment, we have to overthrow the decadent Islamic Republic and over its ruins build an entirely different economic and social system, namely the “New Socialist Republic of Iran.”