“I had an illegal abortion in Birmingham, Alabama in 1969 #Never Again” 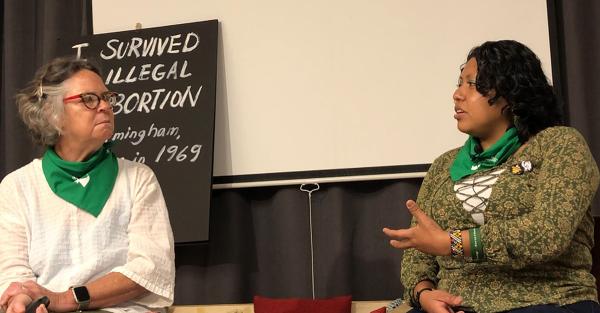 Revolution Books (RB) in Harlem held an emergency abortion speak-out on May 4, in the immediate wake of the leaked draft Supreme Court decision written by Samuel Alito outlawing abortion. It was a deeply felt event and an urgent summoning to act.

We organized the program simply, one might say flying by the seat of our pants to make it happen. We had no definite roster of speakers. But at one of the outpourings of protest in New York City against the draft Supreme Court ruling, a woman stood quietly yet emphatically. She was hoisting a huge hand-lettered sign that read: “I had an illegal abortion in Birmingham, Alabama in 1969... Never Again!” The woman, Angela, was regularly approached, at times surrounded, by young people and media wanting to hear her story. She is an artist and art teacher. We invited her to join the speak-out, telling her about the revolutionary mission of RB and the work of RiseUp4Abortion Rights. After thinking about it some, she agreed... and thus became our main speaker.

Michele Xai from the National Revolution Tour and Revolution Club, and a follower of Bob Avakian (BA), was the emcee. She welcomed people and made some remarks about the battle before us. She talked about how we have to take to the streets as called for by RiseUp4AbortionRights, to prevent this decision from becoming the law of the land—and at the same time, we have to dig deeply into the roots of this and why it will take an actual revolution to end the oppression of women. She encouraged people to explore the sampler of writings by Bob Avakian on “breaking the chains” of women’s oppression.

The audience was a good mix: a number of undergrad/grad students; some community people from Harlem; some professionals and activists; and others. We started the program by playing the video of the now-anthemic Chilean protest song against rape culture and violence against women, and the enforcement of control over women by the institutions of society. The video shows mass actions in the streets of Latin America and elsewhere in the world against this anti-women violence and patriarchal control over women.

Angela’s story of her illegal abortion was riveting: a graphic account of what it was like for this 17-year-old to travel surreptitiously for what she thought would be a manageable procedure only to be routed to a horrific “back-alley” abortion—arranging that, going through that, lying to emergency room personnel about what had  happened, and living with that experience. She ended by calling on people to act to stop this new assault on women.  We also played a segment of Sunsara Taylor’s February speech at Revolution Books in which Sunsara goes into the larger fascist agenda for which this assault on abortion is a battering ram.

People in the audience were moved and roused. A social work student graduating from Hunter College spoke of imperialism and control over women’s bodies—of how, on the one hand, you have this attack on abortion and, on the other, this whole history of forced sterilization by the U.S. government against women in Puerto Rico. He said this program was eye-opening for him and how excited he was to discover RB. An older Black community person spoke about how this attack on abortion was only the beginning of a bigger assault... on voter rights and other rights, and how these reactionary forces are on an offensive and won’t stop with this. Two female grad students, one African-American and the other African-Latina, spoke from different angles about how central, from the beginnings of this country, the use of and control over Black women’s bodies, and the  denial of women’s humanity, has been to America’s development. An older activist spoke of the need for all manner of protest to hit the system hard. Other comments were offered about patriarchal control over women’s sexuality, the Bible treating pregnancy as punishment.

A retired doctor was inspired to tell his own personal story of how back in the 1960s, during his residency at Bellevue Hospital, young women would come in severely ill, with fevers and more, from botched abortions. He was learning medicine to save lives of people in difficulty but these young women were dying tragically and unnecessarily, when they should have had lives to look forward to.

Several times in her remarks Angela had said, “Maybe I made a mistake but he [the young man with whom she had sex] was pressuring me.” Michele said that “even if you did make a mistake, no one should go through what you did... but you didn't make a mistake! You were forced against your will.” Angela was visibly agonizing. Here was this brave woman with relative certitude still somewhat weighed down in her thinking. And Michele was struggling with passion and compassion with her. Here was RB as a vibrant supportive site (not a “safe space”) to talk things through.

Then Michele turned the tables and recounted how as a young girl raised in a Catholic family, she had been on the other side... inculcated with anti-abortion/anti-science ideological poison, even counseling her best friend to have an unwanted baby. And Michele asked Angela how she would answer and struggle with Michele back then and people like that today. Angela talked about how important access to safe and legal abortion is to a woman’s future—and that women, especially poor women, will seek out needed abortions however they can get them, with all the awful consequences that come with unsafe, illegal abortions.

So this was a special moment. It wasn’t just that Angela had a platform to tell her harrowing story. Something more was going on: bringing to people that there is this dimension of changing people’s thinking and struggling with people, people like Michele when she was young and caught up in this kind of backward thinking.

Angela declared to the audience: I decided as a life calling to do something every single day in support of the right to abortion.

More on the Moment, the Problem and the Revolutionary Solution

Raymond Lotta concluded the speak-out, bringing together some of the strands of the discussion. He went into the idiocy of Alito and his argument about the Constitution not mentioning abortion—duh... and it doesn’t mention women since they are only recognized as property; and go to the Constitution to see what it has to say about the enslavement of Black people; the obscenity of Democrats hoping this “energizes the base” to vote in the midterms, when they’ve done nothing to mobilize to effectively protect this right. He went further into how the larger fascist agenda is itself rooted in the nature of this system of capitalism-imperialism and that patriarchy and white supremacy are baked into its foundations, and woven into its fabric and functioning.

He invited people to learn more about Bob Avakian and the new communism and its approach to the emancipation of women as a central goal and driving force of the revolution to end all exploitation and oppression—and how this is not a pipe dream... that this is a rare time when revolution becomes more possible. He pointed to how this battle around abortion is not only critical for the future of women but can also contribute powerfully, if we wage it on the scale and with the ferocity required, towards strengthening and accelerating the movement for the revolution humanity so urgently needs.

People hung out at the store for informal discussion. Some signed up to become RB volunteers. We talked about The RNL—Revolution, Nothing Less!—Show, and got materials out for the RiseUp4AbortionRights May 8-14 week of protest. This was a glimpse of the vital role that Revolution Books can play, especially in times like this. Video of the program will be posted soon.