Over the course of the uprising since mid-September, various ruling figures of the Islamic Republic of Iran (IRI) have issued statements that can be seen as “mixed signals” about the so-called “morality police,” enforcement of hijab laws, etc. For example, “Supreme Leader” Ali Khamenei gave a speech in early January, where he reportedly said that women without hijabs are still “our children” and should not be treated as anti-IRI.1 Many observers had taken this as a new, conciliatory tone from the top mullah.

But in the past week, just a few days after that speech, it appears there has been a certain resolution of differences, with the regime unifying, to some degree and for now, around Khamenei and the most fanatical hard-core theocrats and their program for stabilizing and saving the IRI.

A couple of key indicators of this resolution are: 1) Khamenei’s appointment of rabidly theocratic Ahmadreza Radan as the new national police chief; and 2) new directives from the judiciary requiring uniform, draconian punishment of any woman who refuses to comply with the forced hijab laws, who doesn’t veil or doesn’t do it “properly.”

Radan has a decades-long track record of sadistic brutality towards political prisoners, and towards oppressed, impoverished minorities in Kurdistan and Sistan-Baluchistan. He pioneered the creation of Iran’s fascist “morality police,” and has remained one of its central figures. He ordered violent repressive tactics against street protests in Tehran, reportedly telling his pigs to shoot protesters and use their vehicles to run them over. He viciously crushed the 2009 “green movement” protests, and oversaw the brutalization of several youth protesters, including children of officials, who died in Tehran’s Kahrizak jail. His fanatical enforcement of theocratic values has included shutting barber shops for “introducing new hair styles for the youth,” opposing men wearing ties and women wearing boots.2

Within days of Radan’s appointment, Iran’s judiciary issued a series of new directives to the country’s police to take “decisive” action against women who do not abide by the compulsory hijab laws. These women are to be “firmly punished.” Penalties can include a steep fine, a travel ban, denial of social services and employment, and blocking their bank accounts, if they are not outright arrested or murdered.3

“Improper hijab” meant a death sentence for 22-year-old Mahsa Amini, who died while in custody on September 16, 2022. Her murder touched off the past four months of uprising in Iran, replete with beautiful hijab bonfires and women walking bareheaded in public and removing the hijab on social media. The recent directives came with threatening remarks by IRI officials such as: “The crime of removing the hijab is one of the obvious crimes, and law enforcement officers are obliged to arrest the perpetrators of obvious crimes and introduce them to the judicial authorities for punishment."4

Anyone caught encouraging women to be hijab-less may receive up to 10 years in jail. Businesses like restaurants, cafes or workplaces can be fined or shuttered for bareheaded women on their premises. The medieval regime will use hi-tech face recognition to target hijab-less women inside cars with a warning text that could lead to fines and jail.5 All this is meant to create a terrorizing social atmosphere for women of being constantly watched—and snitched on.

Even as “death to Khamenei,” “death to the Islamic Republic” has been ringing out all over Iran in the uprising, there has been turmoil within the IRI ruling circles about how to save their system: some have been demanding absolute unity behind Khamenei, some have called for dumping him to preserve the IRI, and some have called for dumping both with “regime change.” The latter trend is especially susceptible to machinations by Western imperialists (U.S./Europe/Canada/UK) who want the regime to be weakened or go down, but do NOT want the women and youth to win, turning the uprising into a real revolution. The oppression AND liberation of women is much bigger than Iran. No oppressor (e.g., U.S. anti-abortionists) wants the youth to win real emancipation (as opposed to just a few cosmetic changes.) 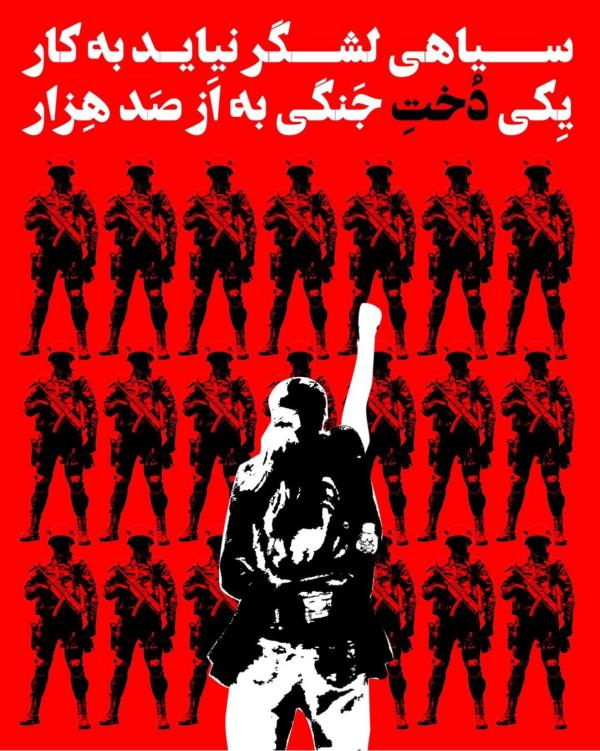 The women’s struggle in Iran has given courage to women and men worldwide. Artist Meysam Azarzad’s poster reads: “This massive army is useless. Indeed, a single fighting girl is worth hundreds of thousands of them.”

The Forced Hijab Is Key to the Survival of the IRI

The cornerstone of Iran’s theocracy is cemented in misogyny. The forced hijab was a key component of Ayatollah Khomeini’s regime coming to power in 1979, rallying a large women-hating social base of religious fanatics, men and women, who justified the repressive society based on blind obedience to Shari’a law and the rule of mullahs. This allowed the IRI’s marriage of religion and government to

… trample on the broader basic rights of the people in all aspects of life: suppression of dissent; freedom of thought, expression and publication; freedom of association and partisanship; suppression of oppressed nationalities; suppression of workers, students and teachers, etc. Compulsory hijab is the cohesive glue of the Islamic Republic, as its leaders have emphasized, "maintaining it is even more important than anti-Americanism."6

The new directives of Iran’s regime make clear how the oppression of women, concentrated in the forced hijab, is seen as foundational to the continual survival of the IRI as the IRI. It indicates that the most hard-core theocrats in Iran see giving in or giving up this vital social glue can cause their whole society to unravel. The forced hijab is about the control of women, the stability of a society founded on their second-class status. For these capitalist theocrats in Iran, it would mean giving up the whole reason for the existence of an Islamic Republic.

Ebbs and Flows of Resistance Vs. Revolution

Mass protests in Iran and the Iranian diaspora continue to take place. But over the past month in Iran, there does seem to be some ebb of the scale and scope of the nationwide protests. It remains to be seen whether this is temporary. This has been uneven, with protests continuing in the areas of Kurdistan and Sistan-Baluchistan. There have been notable outbreaks at gatherings that mark the traditional 40th day commemoration of someone’s death, and at the gates of some prisons. This apparent ebb may be due to a variety of factors—a severe winter; the imprisonment of over 20,000 protesters; regime censorship of social media; raids against rebellious campuses and schools, with many students beaten, expelled and jailed; murder of hundreds of protesters on the streets; executions with many more facing death sentences, imprisonment of over 40 defense lawyers,7 etc.

It is unclear how things will unfold in the coming days. What we know, however, is that a great deal has been accomplished by the uprising—even as much more still needs to be accomplished. It remains to be seen how the struggle will go forward, and we will follow and report this closely. But no matter what, the fight to stop executions and free Iran’s huge number of political prisoners must be carried forward with urgency. There is both the increased basis to do so, as well as the necessity. This is a key component of going forward to defeat the repression with more organized resistance—and the possibility of advancing to a real revolution.

In that light, it is incumbent on people who want to see a better future for Iran—a future which does not trade one oppressor for another—to seriously dig into and engage the analysis and program of the Communist Party of Iran, Marxist-Leninist-Maoist (CPI-MLM).8

4. Iran Police Ordered To Deal Decisively with Women without Hijab, IranWire, January 10, 2023. [back]