Join Protest Against Iran President Raisi at UN on September 21 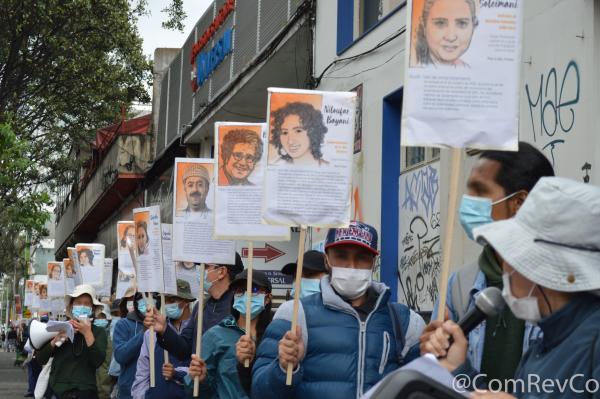 “The Emergency Campaign to free political prisoners in Iran takes up internationalism and relies on people of the world, not the governments of the world. Your actions are an internationalist model for us and the world and each time we hear from you it is more inspirational than previous actions. With the hopes of going beyond the world of oppression, exploitation, prison and prisoners! Warmest hug!” 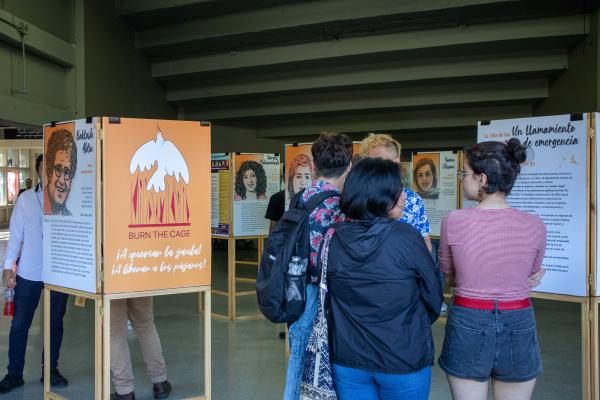 On September 21, the International Emergency Campaign will be carrying this internationalist spirit—of proceeding from the shared interests of the people of the world as our Emergency Appeal states—and the demand to Free Iran’s Political Prisoners NOW! into upcoming mass protests being called by a broad array of people and groups from the Iranian diaspora.

The occasion: the slated visit of Ebrahim Raisi, the President of the Islamic Republic of Iran (IRI), to New York City to address the United Nations General Assembly on September 21 at 8 a.m.

He was a member of the IRI’s “death commission” that sent over 5,000 Iranian political prisoners to their graves in 1988. Since Raisi took office a year ago, executions in Iran have escalated amid mass protests of many, many thousands against his rule.

These state killings have been fast-tracked by the IRI’s illegitimate judicial process with its well-documented record of arbitrary arrests, trials, forced confessions, beatings and torture.

Between January 1 and June 30, 2022, Amnesty International reports that Iran’s regime carried out an average of at least one execution a day, and likely more given that official counts are notoriously secretive. On June 6, there was a mass execution of at least 12 prisoners in Zhedan prison, which followed 9 executions on May 14.

There are alarming reports that on June 15, there were 12 executions at Raja’i Shahr, a prison where there are several wards for political prisoners. Amnesty International, citing “informed sources” reports that since early 2022 prison officials at Raja’i Shahr “which has one of the largest number of people on death row, have been executing five people each week, with up to 10 executions carried out in some weeks.”

This rash of executions is happening against a backdrop of intensified repression including vicious assaults on women for defying the IRI’s forced wearing of the hijab, the arrest of world-renowned filmmakers, its applauding of the attempted murder of the writer Salman Rushdie, the ongoing medical neglect of prisoners amid the continuing COVID epidemic and more. 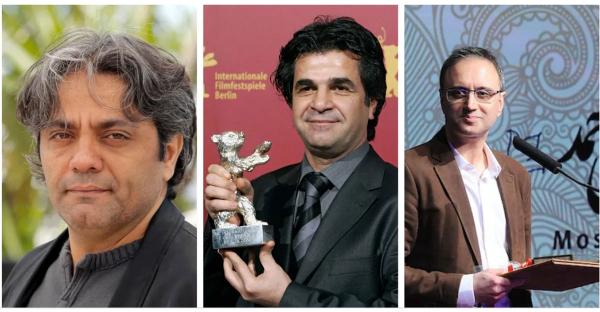 The surge in executions poses a serious threat to all of Iran’s prisoners given Raisi’s past and recent history, especially to the political prisoners and imprisoned religious and ethnic minorities. The ethnic Baluchi people make up only five percent of Iran’s population, but comprise over 25 percent of those executed in 2022. And this year there’s been a new wave of arbitrary arrests and destruction of the homes of members of the Baha’i faith. 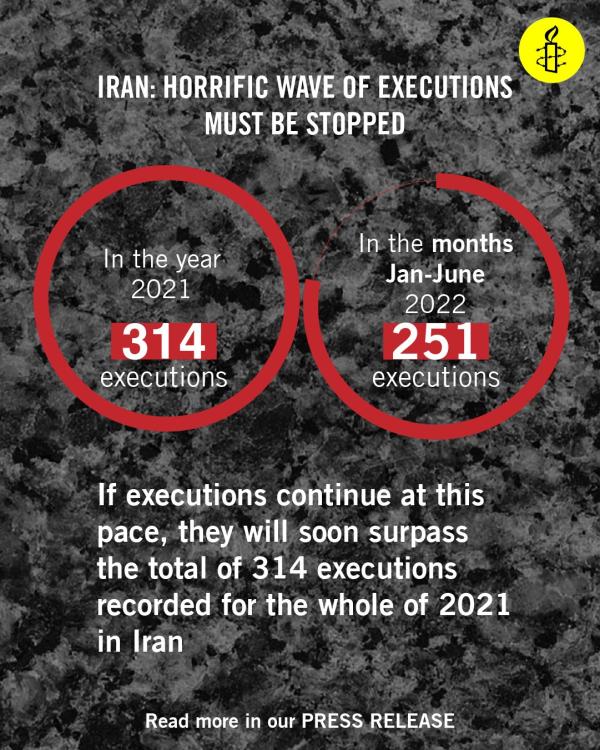 However, as the IEC Emergency Appeal issued in early 2021 pointed out, waves of IRI repression have been met with inspiring heroism right up to today. Look across the globe, where else has there been such sustained waves of sustained and often massive protests and rebellion in the face of savage repression, and by people from all walks of life from workers to teachers to filmmakers?

Which side are you on?

The Iranian people are our people. People around the world—especially people in the U.S.—need to stand with them against Raisi and the IRI! Yet too many “anti-imperialist” or “progressive” people have instead stood aside from the Iranian peoples’ struggle and the fight to free Iran’s political prisoners—or taken the wrong side. Refusing to speak out tacitly supports the IRI’s barbaric repression, including against Iranian women.

Some radical academics and activists who should know better even said they would not sign the Emergency Appeal because its exposure of Iran’s vicious, illegitimate repression and demand to free Iran’s political prisoners “helps the U.S.”

Question: did you actually read the Emergency Appeal all the way through? It concludes with the demand: “We say to the U.S. government: NO THREATS OR WAR MOVES AGAINST IRAN, LIFT U.S. SANCTIONS!” How is this stance “helping” the U.S.? Shouldn’t many more people in this country be actively taking it up?

Some radical anti-war or feminist groups in the U.S. that correctly oppose U.S. war threats and sanctions on Iran held a meeting with the misogynist Islamic regime even as the regime was carrying out brutal attacks in Iran, including against women, dissidents, and minorities.

This objectively amounts to throwing 80 plus million Iranians, from all walks of life—the only real potential anti-imperialist force in Iran—“under the bus” of theocratic, patriarchal and fascist repression. It proceeds from the killing confines of thinking that our only choices are between reactionary forces of one kind or another, and we therefore have to pick between them, or follow the deadly and faulty logic that “the enemy of my enemy is my friend.”

Among others who oppose the IRI, such as millions in the Iranian Diaspora, this same line of thinking leads them to support the U.S. criminals in hopes their imperialist hostility to the IRI will somehow end up benefitting the Iranian people’s struggle. This is akin to the delusion that a rope can support the neck of its victim. 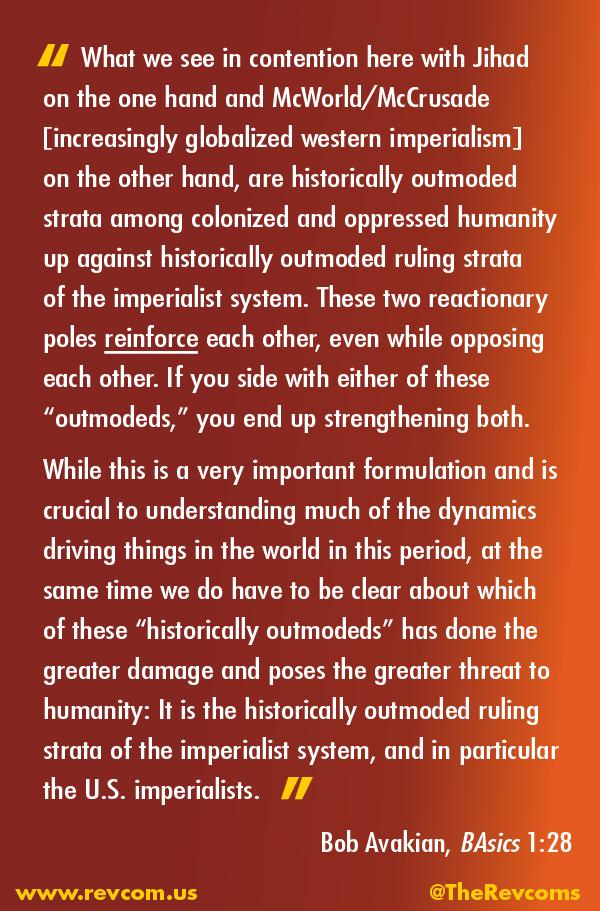 September 21 protest of Raisi: an opportunity to do the right thing

As Kave Milani points out, the fight to free Iran’s political prisoners can only be fought by relying on the people of the world. And as the Emergency Appeal makes clear:

The governments of the U.S. and Iran act from their national interests. And, in this instance, we the people of the U.S. and Iran, along with the people of the world, have OUR shared interests, as part of getting to a better world: to unite to defend the political prisoners of Iran. In the U.S., we have a special responsibility to unite very broadly against this vile repression by the IRI, and to actively oppose any war moves by the U.S. government that would bring even more unbearable suffering to the people of Iran. We demand of the Islamic Republic of Iran: FREE ALL POLITICAL PRISONERS NOW! We say to the U.S government: NO THREATS OR WAR MOVES AGAINST IRAN, LIFT U.S. SANCTIONS!

We call on everyone who stands for justice and wants a better world to unite and join with the IEC and all those who have signed the Emergency Appeal during the upcoming protests against Raisi at the UN General Assembly in New York City. This can break through the silence of the U.S. media and U.S. “left” and make a major social question of freeing Iran’s political prisoners based on the correct orientation provided by the Emergency Appeal.

We will be holding a press conference at the UN on the day Raisi speaks at the UN (September 21) and joining with the protests.  We hope to hold discussions with Iranian ex-political prisoners and revolutionaries in the days prior. Check the IEC website frequently in the coming weeks for further details. Contact us to volunteer for outreach, translation (English, Farsi, Spanish, etc.), production of signs, banners, flyers and literature, etc.

The IEC wants to congratulate Ms. magazine on its 50th anniversary issue, and express our appreciation that the Emergency Appeal appears as an ad in it (pgs. 40-41). The Appeal’s publication is a great and timely political tool to advance this struggle urgently and tirelessly.

Now on newsstands!  The IEC's Emergency Appeal appears in Ms. Magazine's Summer edition, on pages 40 & 41.  Get your copy NOW and share it widely!