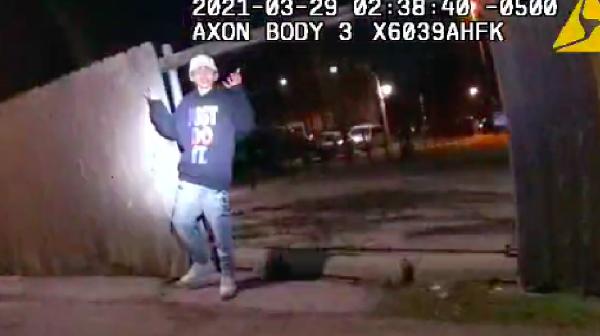 The video showed Adam Toledo with his hands up before he was murdered by Chicago police.

More than two weeks after Chicago police shot and killed Adam Toledo on March 29, the city of Chicago finally released police body cam videos of the incident. The police had claimed that the shooting was the result of an “armed confrontation.” In his incident report, the cop who fired the shot claimed that Adam Toledo posed an “imminent threat” and that he was armed with a semiautomatic weapon. The videos released on April 15 show the youth being chased down a dark alley, then turning around—with his empty hands raised—before he is fatally shot, his young life so suddenly and unjustly ended at the hands of armed enforcers of the law.

The released videos also show what the police claim is a gun that Adam Toledo and a 21-year-old man who was with him that night were carrying at some point. But as Adam Toledo’s family attorney emphasized after the video’s release, “Adam during his last second of life did not have a gun in his hand. The officer screamed at him ‘show me your hands’. Adam complied, turned around. His hands were empty, when he was shot in the chest at the hands of the officer.”

Adam lived with his mother and four siblings in Little Village, a largely Mexican neighborhood in West Side Chicago. Elizabeth Toledo, his mother, described Adam as “a little kid” who “still played with Hot Wheels.” As we said right after the murder, “the police killing of Adam Toledo was completely unnecessary and totally intolerable. His mother said in anguish, ‘They had a lot of options, but not kill him.’ What kind of a monstrous, criminal system has armed enforcers of the law that shoots down seventh-grade kids?!”