Editors’ Note: The following communiqué reports on an important development last week in the battle around the June 12 march in Los Angeles to “Show the World: We Are Getting Organized Now For REVOLUTION, NOTHING LESS!” Revcoms are going all out in the coming week to build for June 12. If you’re in the LA area, join the march (or marches happening in New York City and Chicago in conjunction with the LA march, if you’re in those areas). Get the word out to everyone you know. Check revcom.us every day to catch up on the latest developments and news on June 12 itself. 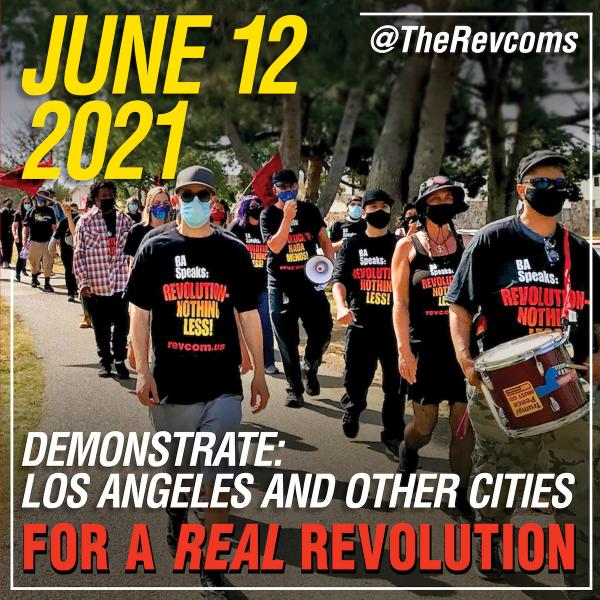 The Revcoms have called for everyone who cannot stand the way the world is, and have the heart to fight for something worth fighting for, to march Saturday, 2 p.m., June 12 to show the world we are getting organized now for Revolution—Nothing Less!

The LA Sheriffs tried to deny a permit for this march, but after an outpouring of protest they were forced to back off. Last week, the Revolution Club received a formal letter denying a permit for this march, signed by head Sheriff Alex Villanueva, with the bogus reasons that, 1. This Sheriff's station “does not have a sufficient number of patrol deputies... without inhibiting normal police protection to the rest of the unincorporated region nearby” and 2. “Past demonstrations within the last year at South LA Station became unruly, which ultimately resulted in injury to persons and property.”

First, the idea that they could deny the right of people to march and speak out because the sheriffs don’t have enough resources to shut them up is ridiculous on its face. Enough said about that.

Second, let’s talk about “unruly” and “injury to persons and property.” Dijon Kizzee was murdered by the LA Sheriffs. And people who came out to protest the violence of these sheriffs were met with more violence from the sheriffs, who shot tear gas and rubber bullets at gatherings for days, hitting children and sending people to the hospital. If they got away with this, they’d be able to declare any protest against their violence as “unlawful assembly,” viciously attack people the way they did last year, and then use their own violence to declare that people don’t have the right to march in the streets any more. This is not mainly hypocrisy, it is deadly fascist logic.

And by the way, when the revolution comes to power, people who oppose us will not only have every right to march and protest against us—that opposition against us will even be funded! Look at the Constitution for the New Socialist Republic in North America, authored by the revolutionary leader Bob Avakian at revcom.us.

Nobody should accept these unruly, out-of-control, white supremacist gang-infested LA Sheriffs determining who gets to march, shredding up people’s rights, or making those rights meaningless. And a diverse group of voices DID come together to demand the march permit, including reverends, lawyers, professors, musicians, well-known actors, health care workers, activists, as well as people from South Central… Go to revcom.us for the full list. And WE WON!

Why Were the Sheriffs Shook... Why Did They Back Off… What Are the Key Lessons?

In short, one of the things common to all the brutes enforcing oppression is that they rely on keeping the people that they oppress most viciously feeling surrounded and powerless. The diverse voices speaking up showed the potential of different kinds of people from different parts of society coming together against the arbitrary authority of these sheriffs.

It also needs to be understood, the brutes enforcing this system FEAR the people they oppress. Yes, read that again. THEY. Fear. YOU. The system they enforce has no future—no way to END white supremacy, male supremacy, demonizing of immigrants, wars for empire, or the destruction of the environment—and they fear that millions of those who they have no answers for, and no future for, could have a real shot at ending this whole system if they get connected with Bob Avakian and the Revcoms, and started working together now for revolution.

Even when it seems like we’re all too fucked up, too busy going along with the way things are, or too busy fighting each other… the oppressors see, and fear that potential. Bob Avakian (BA) sees that potential too, he understands what the masses of people are capable of, fighting to emancipate all humanity… and far from fearing that potential, BA has dedicated his life to making that potential a reality.

A Call to All Who Want a Better World…

From Southwest College to the LA County Sheriffs

Show the World: We Are Getting Organized Now For REVOLUTION, NOTHING LESS!

March will start at the corner of Southwest College on Western Ave. and Imperial Hwy.

March through the neighborhood, to the South LA Sheriff’s Station, 1310 W. Imperial Hwy.

And to all those who want a better world, who want people to be able to raise their sights to a better world: YOU need to be there too on Saturday, June 12!