On Roe v. Wade at the Supreme Court in DC: 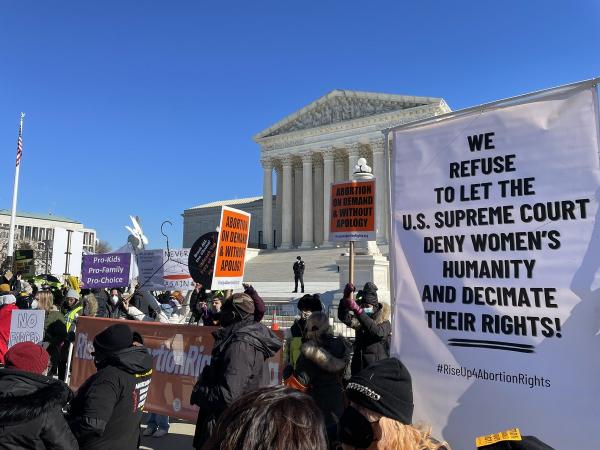 On the 49th anniversary of Roe v. Wade, the landmark Supreme Court decision that first established abortion rights nationwide, starkly different futures for women were on display in Washington, DC.

On January, 22, the actual anniversary, 40 to 50 people rallied at the Supreme Court as part of a new movement announcing itself in the streets for the first time. They declared their determination to call forth and lead a society-shaking fight to defeat the acutely posed assault on women's fundamental right to abortion. Persevering in the face of fascist disruption and bitter cold, this new movement is centered in the statement published at RiseUp4AbortionRights.org, which makes clear its intention to change “the whole political atmosphere throughout society and what women-haters—from the Supreme Court to the State Houses to the streets—feel they can get away with.”

This was a stark contrast with the triumphalist outpouring the day before when tens of thousands of anti-abortion Christian fascist theocrats and others marched in a so-called March for Life. Their emcee shouted out 18 sitting senators and congresspeople in attendance. Speaker after speaker expressed exuberant confidence that 2022 will be the year that Roe will fall. And they were determined not to stop there. As former Illinois Congressman Lipinski put it, “Hopefully, next year will be a new era of building a culture of life because Roe will be gone! But no matter what happens at the Supreme Court, we will continue to march to protect the unborn. We will continue to march until our nation fulfills its promise of equality and the right to life for all, until all babies and their mothers are protected.”

At the rally held for abortion rights, Merle Hoffman, the founder and CEO of Choices Women's Medical Center and an initiator of RiseUp4AbortionRights, spoke of her experience providing abortions for fifty years and the need to rise in struggle now to protect this right. She said, in part:

Currently, in states like Texas and 27 others that are jumping over themselves, the legislatures, to try to do “creative,” anti-choice legislation, like the heartbeat bill, women will once again have to go back. And if the Republicans and fundamentalists have their way, this hanger and what it represents will be the future for women in this country.

When a crowd of young anti-abortion counter-protesters briefly interrupted and drowned out Hoffman's speech, the pro-choice crowd met them with defiance and discipline, chanting in favor of abortion rights and eventually succeeding in securing the space to proceed with the rally. When she came back, Hoffman was even more determined and defiant, calling on people to shake off the shame and stigma that is put on abortion and women's choices and rise to the challenge of fighting to defend this right now.

Sunsara Taylor, a follower of Bob Avakian and key initiator of RiseUp4AbortionRights, pointed to the lack of mobilization among those who support abortion rights and women at this moment of emergency. She called out those responsible:

It's largely because the Dems won't even mention abortion... and because all too many so-called leaders of the so-called women's movement are capitulating in advance. Sure, they dress it up. They say we are “proactively” pushing for legislation to protect abortion in a few local places... for after Roe falls. Or they are “proactively” teaching women how to induce their own abortions... for after Roe falls. But all accept the unacceptable situation where women have lost their legal right to be full human beings! That's not pro-active, that's capitulation.

If the Supreme Court was about to overturn Brown v. Board of Education and restore the situation where Black people were legally forced back into a “separate but equal” society, would any decent person accept this and just try to prepare to make these newly segregated schools as good as they can be? Hell no! And no decent person should accept the overturning of Roe v. Wade and have the gall to call themselves fighters for women.

These so-called leaders of the so-called women's movement are so enslaved to this system, that they are willing to enslave women.

And this is why we are here. It has fallen to us to step into the breach and to summon a society-wide fight to DEFEAT THIS ASSAULT ON WOMEN. And this fight needs to not only go up against these fascist woman-haters, but directly up against the capitulationism of the so-called movement.

Katea Stitt, the program director at WPFW (Pacifica) radio in DC and an early signer to the RiseUp4AbortionRights statement, told the crowd how critical it had been for her to access a safe abortion as a teenager. She then read from a powerful statement that was first issued in 1989 by a group of Black women, including Shirley Chisholm and others, organized by Donna Brazile. It reads in part:

This freedom—to choose and to exercise our choices—is what we've fought and died for. Brought here in chains, worked like mules, bred like beasts, whipped one day, sold the next—for 244 years we were held in bondage. Somebody said we were less than human and not fit for freedom. Somebody said we were like children and could not be trusted to think for ourselves. Somebody owned our flesh, and decided if and when and with whom and how our bodies were to be used. Somebody said that Black women could be raped, held in concubinage, forced to bear children year in and year out, but often not raise them. Oh yes, we have known how painful it is to be without choice in this land.

...Now once again somebody is trying to say we can't handle the freedom of choice. Only this time they're saying African-American women can't think for themselves and, therefore can't be allowed to make serious decisions. Somebody's saying we should not have the freedom to  take charge of our personal lives and protect our health, that we only have limited rights over our bodies. Somebody's  saying that if women have unintended pregnancies, it's too bad, but they must pay the price.

Somebody's saying that we must have babies whether we choose or not. Doesn't matter what we say, doesn't matter how we feel.

Lori Sokol, Executive Director of Women's eNews and an initiator of RiseUp4AbortionRights, called out the way the media soft-pedals the danger of a world without legal access to abortion. She told a harrowing story of a young woman who, even while abortion was legal, was afraid to tell her parents that she was pregnant and instead tried to use a pencil to induce her own abortion, risking her own life. She ended by calling on people to see the connections between the assault on abortion rights and other rights that the Christian fascists are also taking aim at:

I also represent the LGBT community. I am a gay woman and there are very few gay women, or in the gay community in general, who understand the importance of fighting and defending women's right to choose. Not only because gay women can of course become pregnant, but we have to understand that first it's going to be turning back abortion rights. Then it's going to be anti-contraception. Then it's going to be turning back marriage equality in this country and the rights of people of color. We all need to be in this together! So, thank you. ABORTION ON DEMAND AND WITHOUT APOLOGY! RiseUp4AbortionRights.org! Thank you for being here!

The emcees for the RiseUp4AbortionRights rally called on everyone to start organizing now for major protests and marches on March 8, International Women's Day, in big cities and small towns across the country and urged everyone to register for a nationwide organizing conference via Zoom this upcoming Sunday, January 30, to become part of taking this fight forward.