The October 2 Slogan “Really says it all!”… an Artist Donates Her Work

From a Revcom in Chicago:

I introduced myself, and went over that on October 2 the Women’s March and other groups have called for demonstrations all over the country in defense of abortion rights. Everyone who cares about the emancipation of the half of humanity that is female should be at one of these marches and make this a turning point in building relentless in-the-streets resistance. The Revcoms are forming a Break the Chains contingent to march on that day...

I read a few of the slogans of the contingent and asked her thoughts. She said, "Oh, I like the first one! (No Going Back—No Surrender! Abortion On Demand & Without Apology!)" I asked why. "Because it’s very succinct. And still, it really says it all!"

I told her about the Emergency Fund Drive for $15,000, and asked if she would donate. She wanted to donate a series of artworks to raise funds, saying, "Oh, I went home and painted a series already. It's a series showing the different struggles women go through. For example, one painting depicts a woman who finds out she's pregnant but she doesn't have the money to care for a child and it shows her disappointment." I told her about some women artists we know who had earlier in the month told me they are thinking of organizing a whole art show on the theme of women and abortion and that I would tell them about her creating this series of works which they would be glad to hear about.

She also said that she'd circulated leaflets about the contingent at the October 2 march to some friends and she'd now go back and ask them if they would donate. I told her I'd send her the page with the ways they can donate. I told her about the livestream that is also promoted on the same page. 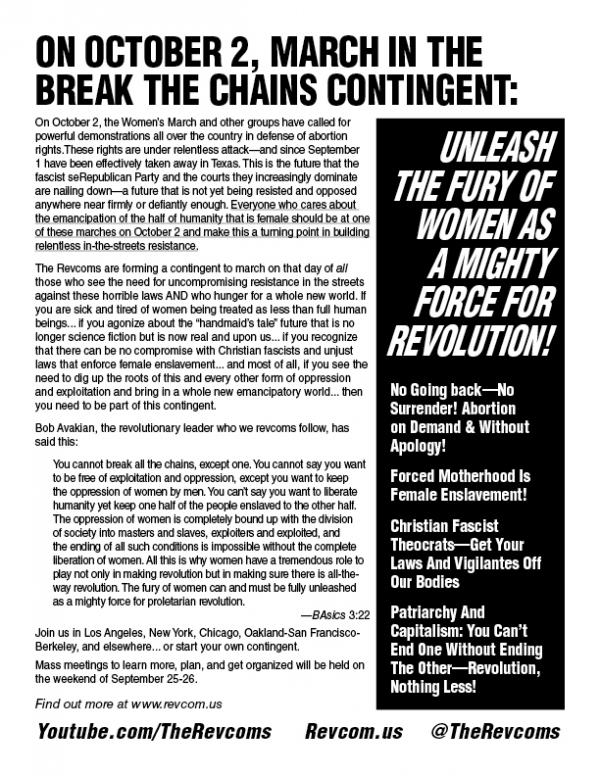 ON OCTOBER 2, MARCH IN THE BREAK THE CHAINS CONTINGENT: UNLEASH THE FURY OF WOMEN AS A MIGHTY FORCE FOR REVOLUTION!