Opening Commentary by Andy Zee from The RNL—Revolution, Nothing Less!—Show: Episode 112, July 28

Editors’ Note: The following is an edited transcript of Andy Zee’s comments from the latest RNL—Revolution, Nothing Less!—Show. Watch the clip here.

Welcome to The RNL—Revolution, Nothing Less—Show. This is Episode #112 on July 28, 2022. My name is Andy Zee, I am the host of the show coming to you from Los Angeles, California.

Revolution—Nothing Less! It’s the name of our show and our mission—a real revolution for the emancipation of all humanity.

If you say this… if you mean it… if you are working for it… and especially if you are starting to rattle the cage of this system. And if you are doing this when walls of the cage are cracking: when those who rule are sharply divided, when people’s lives are being upended by the workings of the system and when words of civil war are in the air… when the specter of real revolution to overthrow this system is raised, is meant, and people are starting to raise their heads… Those who feel threatened will lash out and try to stamp out the contagion of revolution.

And when such attacks come, know that it is because you are doing something right and righteous. Know that you are striking at the heart of those who have a vested interest of one kind or another in the exploitive and oppressive system that rules over and destroys lives of people here and all over the world.

To stand up for the emancipation of humanity, for the liberation of women and all who are oppressed and viciously exploited by this system... To advocate for a way out of the madness of this system... To promote and defend Bob Avakian, a leader who for decades has been working on, charting a path, a strategy to get out from under this oppressive system—to overthrow it through a real revolution to clear the ground for a radically new society where with a new state power people could go to work on overcoming all forms of oppression and exploitation, is not only right and necessary, it is bringing people what they need most, it is serving the people here and around the world in the most meaningful way—it’s bringing to them an understanding of all that afflicts humanity and it’s bringing them the cure—a scientific way to understand the problem and the solution, it is bringing them a roadmap to be taken up ultimately by millions of people rising up for a radically new and far better world. There’s no greater love than that—to serve the people of the world by bringing them the way to free themselves and all humanity.

For those watching The RNL—Revolution, Nothing Less!—Show for the first time, the attacks I am speaking of are a barrage of baseless lies, threats, and attempts to isolate if not destroy the organization Rise Up 4 Abortion Rights that alone spearheaded the battle that involved tens of thousands of women, young and old, to try to STOP the Supreme Court from overturning the right to abortion by mobilizing people to take to the streets in determined, creative, nonviolent protest. Rise Up was attacked by a motley group of “leftist” pro-choice groups for its association with us—the revolutionary communists, the revcoms, with the scare word that we are a “cult” led by the “cult leader” Bob Avakian. If this is your first time watching The RNL Show, go back and watch the last two episodes. And, if you’ve seen them, watch them again: they are provocative, deep programs that have everything to do with fighting for a future worth living in. These programs forcefully bring out why these opportunist forces who see no prospect of any fundamental change have such venom against Bob Avakian who has dedicated his life to the cause of the emancipation of humanity.

I am speaking about how to understand and take on the attacks against revolution as well as on Rise Up 4 Abortion Rights, not just for those of you who are for revolution, but also to all who are agonizing, despairing and furious about a future where women are denied the right to control their future... or, where you recognize the system destroying the planet we live on. To all of you who took and are still taking to the streets to righteously fight for the right to abortion, it matters for you to understand and stand against the attacks on revolution. In fact, these attacks should drive you to find out about the revolution and its leadership.

When revolution and its leadership for a radically new world is under attack, that’s when it’s time to double down and do so with all the passion and scientific substance we’ve got. People need to know that there is a way to get free, that this system is not all there is or could be. And, that a better world IS possible. They need to know this even when they don’t know they need it, or don’t think they need it—because they are thinking in the way the system has conditioned them to think. So, without apology or half-stepping, we have to struggle hard with people over all the things, all the ways of thinking that this system promotes—the profound individualism of me-first entitlement that comes from living at the top of this imperialist dung heap of an empire.

We double down on promoting and defending the revolutionary leadership of Bob Avakian because we have learned from the history of this country, how its rulers foment divisions among the people, demonize and isolate revolutionary leaders, and even eliminate them. Malcolm X and the charismatic young leader of the Chicago Black Panther Party, Fred Hampton, to name two. This isolation and demonization we will not allow. And, neither should you.

We double down upholding, defending, fighting far and wide for the leadership we have in Bob Avakian (BA) because to make a revolution anywhere in today’s world and especially in a complex society like this requires far-sighted and rigorously scientific leadership. BA is that and much more. He has developed the new communism, which is, as his Official Biography states, “a continuation of, but also represents a qualitative leap beyond, and in some important ways a break with, communist theory as it had been previously developed.” A hallmark of the new communism is that it:

thoroughly repudiates and is determined to root out of the communist movement the poisonous notion, and practice, that “the ends justifies the means.” It is a bedrock principle of the new communism that the “means” of this movement must flow from and be consistent with the fundamental “ends” of abolishing all exploitation and oppression through revolution led on a scientific basis.1 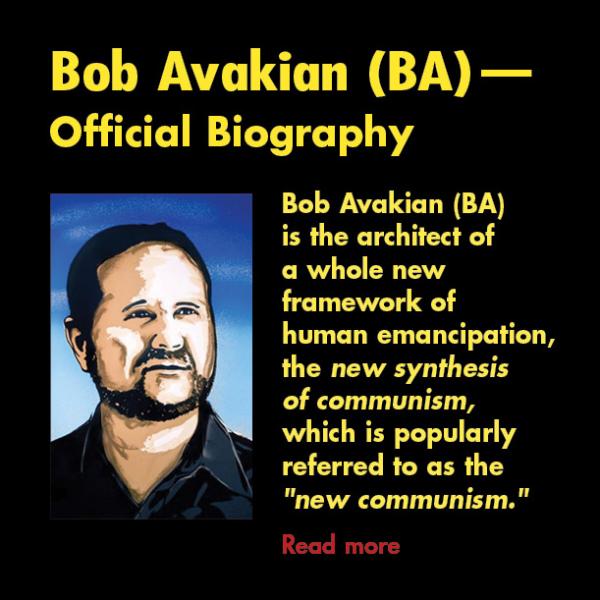 Think about how refreshing, how principled, how liberating and in line with the interests of humanity this ethos is, in stark contrast to the "gotcha" identity politics, cancel culture that saturates the political atmosphere today.

All of what I have said thus far runs through and is theme of today’s RNL Show.

Later in today’s episode, we’re going to hear from Bob Avakian from his 2012 film, BA Speaks: Revolution—Nothing Less! with straight talk on his leadership.

We are also going to play a few excerpts of a Zoom conference with about 200 people that I did with Sunsara Taylor on When Headlines Scream: Communist Cult Is Hijacking the Abortion Movement: What are they trying to stop? What don’t they want you to know?

We also have a brief segment on the article by Bob Avakian: BIPOC LEADERSHIP: THERE IS NO SUCH THING—The Fight Against Oppression and the Leadership That Is Needed. And a short segment on the struggle of women in Iran.

We begin today’s program with Sunsara Taylor speaking on: the first aftershocks of overturning the right to abortion and the nightmare future if we don’t stand up and fight.

Bob Avakian Is Not a “Mad Cult Leader”: He Is a Deep Thinker and Profoundly Thoughtful Leader

1. From BREAKTHROUGHS: The Historic Breakthrough by Marx, and the Further Breakthrough with the New Communism—A Basic Summary by Bob Avakian. [back]