San Antonio: 53 Immigrants Suffocate in Back of Trailer: The System of Capitalism-Imperialism—GUILTY of Murder! 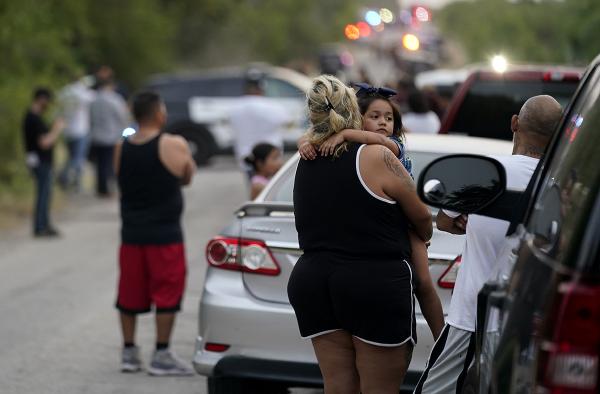 People at the scene where at least 53 people —immigrants from Mexico, Guatemala, and Honduras—suffocated in the back of a trailer..    Photo: AP

On the evening of June 27, a truck parked in San Antonio’s South Side became a hellish death chamber. At least 53 people—immigrants from Mexico, Guatemala, and Honduras—suffered excruciating deaths. They had been crammed into the truck’s trailer in temperatures over 100 degrees outside, and much hotter inside. The San Antonio Express-News reported that “nearly 100 people were packed inside the trailer.”

They had no ventilation, no air conditioning, no water or other liquids, no food. As of this writing, 16 people, including four children, are known to have survived the ordeal—so far—and have been taken to hospitals, suffering from heat exhaustion and dehydration. The San Antonio Fire Chief said the people taken to the hospital were too weak to be able to leave the trailer on their own. He added that they were all “hot to the touch.”

Every year hundreds of desperate people die horrible deaths trying to cross the blood-soaked scar that is the U.S.-Mexico border. In 2021 alone, at least 650 people died along the border while trying to cross it from Mexico into the U.S. Many die horrible deaths, unknown and unmarked, in scorching deserts, freezing mountain passes, or floating down the Rio Grande. People die of dehydration… they starve to death… they freeze to death… they drown… they are bitten by rattlesnakes, run over by trains and cars, and felled by heart attacks. Often their bodies are left to rot—perhaps to be found, perhaps not. Just since June 9 this year, 10 people have drowned in the irrigation canals around El Paso. The International Organization for Migration, which tracks people who die while trying to cross international borders, including the U.S.-Mexico border, noted that “all [migrant death] figures remain undercounts.”

These people trying to get to the U.S. spend their life savings, and go deep into debt to try to make it to and across the border. At every step of the way, they are in danger of being assaulted, robbed, raped, and brutalized by gangs, by police, by federal agents in both Mexico and the U.S., as they try to get to the U.S. in hopes of finding a low-paying shit job. These impoverished people face the gauntlet of a hyper-militarized, high tech death zone that is the U.S.-Mexico border. If they get past all that, they must traverse a barren wasteland prowled by police, Border Patrol, fascist militias, and the National Guard.

Millions have been “expelled” or deported, by U.S. authorities, many sent to live in squalid, disease- and crime-ridden “refugee camps” in Mexico.

Why would anyone risk their lives, and the lives of their loved ones, to make this journey, knowing the dangers involved every step of the way? As the revolutionary leader Bob Avakian said:

Now I can just hear these reactionary fools saying, “Well, Bob, answer me this. If this country is so terrible, why do people come here from all over the world? Why are so many people trying to get in, not get out?”...Why? I’ll tell you why. Because you have fucked up the rest of the world even worse than what you have done in this country. You have made it impossible for many people to live in their own countries as part of gaining your riches and power. (BAsics 1:14)

The horrors caused by this system along the border and within Mexico and Central America are getting worse. And the response of the rulers in this country, Democrat and Republi-fascist alike, has been to escalate the repression—to send still more armed enforcers, more drones, more weaponized boats to patrol the river, more razor fences to demarcate where the “land of the free” begins. To create conditions where yet more dead bodies will pile up, where more inescapable pain will be inflicted.

As president, Trump spoke with blatant racism and boasted of his vicious cruelty toward immigrants. Biden, while claiming to be appalled by Trump’s open brutality and racism, has actually expelled many more immigrants than Trump, in less time. At the same time, the fascist forces have been stepping up their anti-immigrant offensive. Just hours before the corpses were pulled out of the trailer in San Antonio, Greg Abbott, Texas’s fascist governor, boasted in a tweet that, in the months since he had intensified repression along the border in a military deployment called “Operation Lone Star,” its achievement has been “265,000+ migrants apprehended, 16,400+criminals arrested, 13,800 + felony charges reported. Authorities have also turned back 22,000+ migrants from illegally crossing the border.”

A Century of Imperialist Domination

For over a century, the U.S. has plundered, invaded, and dominated Mexico and Central America. It has destroyed and poisoned not only the agriculture but the earth and water that make agriculture possible. It further exploits and persecutes people who somehow make it into this country and are forced to live like hunted animals, without a recognized legal status.

The Democrats and the Republi-fascists take somewhat different approaches—the Democrats speak with honeyed phrases of compassion and fairness, while the Republicans vilify immigrants, claiming they are responsible for the U.S.’s problems and promising nothing but further, crueler repression. But both represent a system that has feasted on savage exploitation of immigrants, and the countries they come from. Both are soaked with the blood of immigrants.

As Bob Avakian (BA) emphasized in his major work “Something Terrible, Or Something Truly Emancipating”:

It is this system which is the basic cause of the tremendous suffering that people, all over the world, are subjected to; and this system poses a growing threat to the very existence of humanity, in the way that this system is rapidly destroying the global environment, and in the danger of war between nuclear-armed capitalist-imperialist powers, such as the U.S. and China.

What is urgently needed and what everyone who wants to put an end to horrors like the immigrant deaths in San Antonio needs to actively work towards and prepare for is, as BA says, “…Revolution—a real revolution to overthrow this system, and bring into being a radically different and much better system.”