There Is No Evil will be screened on October 26-28 by Stanford University’s Iranian Studies Department. There will be a webinar on Friday, October 29, from 10-11 am PDT, with a rare opportunity to engage live with the award-winning filmmaker Mohammad Rasoulof. The original title in Farsi was Satan Does Not Exist. Discussion will be in Farsi, but the film is English subtitled.

This webinar is an act of defiance and courage in itself given that in February 2020, Rasoulof won the Golden Bear prize for this film at the Berlin Film Festival but was not even allowed to travel from Iran to receive his prize. In a May 9 update on the importance of this film and filmmaker, the International Emergency Campaign wrote:

In 2020 interviews, director Mohammad Rasoulof criticized his prior films’ self-censorship, saying, “I have made my decision to speak out” and “… I do not want to make a film rooted in the acceptance of tyranny.”  There Is No Evil examines Iran’s death penalty, including those who carry it out and those who disobey their orders. Filmed in secret, it’s banned in Iran. After repeated arrests and clashes with the regime, Rasoulof was arrested in March 2020 and given a one-year prison sentence for “spreading propaganda” against the Islamic Republic of Iran and banned from filmmaking for two years. 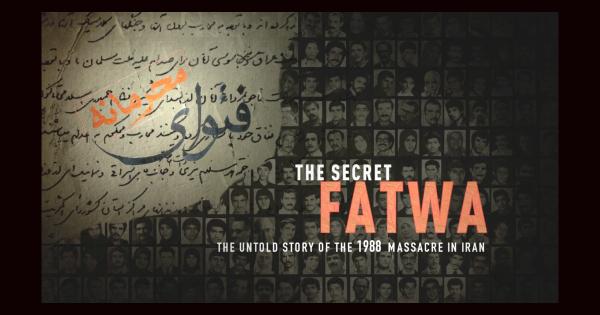 The Secret Fatwa: The Untold Story of the 1988 Massacre in Iran is an award-winning documentary, directed and produced by Delnaz Abadi, about a little-known chapter of Iranian history. Yet this horrific chapter of Iran’s history is bound to Iran’s current reality and the threats looming over its political prisoners today: Iran’s new President, Ebrahim Raisi, played a key role in the 1988 massacre as a member of the “death committee” overseeing it. The film can be seen for free online here.

In 1988, the Islamic Republic of Iran suddenly locked down its prisons, where thousands of political prisoners were serving their sentences, some as long as seven years.

The only permitted visitation was from a 3-member committee: an Islamic judge, a public prosecutor and an intelligence officer. The committee briefly and individually questioned almost every political prisoner about his or her beliefs. Nothing short of a medieval Inquisition, except that the prisoners were not told that their life depended on their answers.

Five months later, the prison authorities summoned the prisoner families and gave each a bag:

“Your prisoner was executed.”

—no explanation, no last will, no body, no grave.