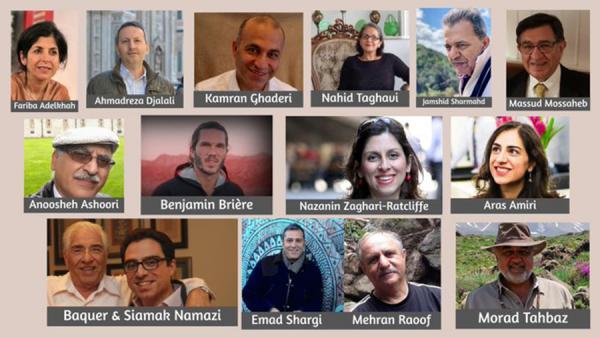 Composite photo of dual nationals being held as prisoners in Iran.

“Unbearable.” That’s the title of Reza Khandan’s gut-wrenching Ms. Magazine report from Iran’s Qarchak prison for women. Khandan is the husband of attorney Nasrin Sotoudeh, who is imprisoned there for the “crime” of representing activists for human and women’s rights.

What is so “unbearable”? “Entering these cells is like being transported back to the Middle Ages,” Khandan writes, into a dungeon “of overcrowding, under-feeding, torture and rape” that inmates call “the end of the world.”

“Unbearable” doesn’t just apply to Qarchak. It applies to all Iranian prisons, the country’s entire “judicial” system, and the dire situation facing ALL its political prisoners.

“Unbearable” is a cry from the heart—and a call to ACT!

On June 13, a group of political prisoners will appear in court in Tehran, possibly for sentencing. This must be met by an international outcry demanding their immediate, unconditional release—in Germany and England where two of these prisoners are citizens, and in the U.S., which has contributed so mightily to the suffering of the Iranian people, from the bloody CIA coup in 1953 right up today through America’s killer sanctions and threats of war.

Any sentences they receive would be totally arbitrary and illegitimate—just as their arrests and imprisonment.

“These people do not belong in jail in the first place,” states the director of the Center for Human Rights in Iran, Hadi Ghaemi, speaking of Taghavi and Raoof. Amnesty International has declared these two prisoners of conscience. They could be charged with the catch-all “spreading propaganda against the state.” That is, thought crimes or comments critical of Iran’s regime of medieval theocratic fundamentalists. Taghavi has been transferred once again to the general population at Evin Prison after months in solitary. By the time he appears in court, Mehran Raoof will have been in solitary confinement for eight straight months—a blatant form of torture.

Iran’s judicial “process” is no more about justice than an inquisition “court” in which a woman’s ability to survive an attempted drowning is deemed proof she’s a witch.

Iran doesn’t hold trials in any meaningful or recognizable sense of the word.

If you’re arrested, you aren’t considered innocent until proven guilty, just the opposite. A defendant rarely has access to a lawyer and is at the mercy of the interrogator. Forced “confessions” under torture are a routine feature of these Islamic fundamentalist courts, used to prove the victim’s “guilt.” Amnesty International documents that those tortures are “widespread” and include “beatings, floggings, electric shocks, stress positions, mock executions, waterboarding, sexual violence, forced administration of chemical substances, and deprivation of medical care.”

Iran’s lawyers generally don’t get case files until right before court hearings, and are then prevented from waging any serious defense. They are often under threats or jailed themselves for defending political dissidents, as has happened to Nasrin Sotoudeh.

Nahid Taghavi’s lawyer, for example, was only given access to her case file four days before her first court appearance on April 28, 2021, and she could not even meet with him.

(For a chilling description of how drastically Iran’s Kafkaesque judiciary restricts defense attorneys, see “Walking in a Minefield Without a Map: The Life of an Iranian Human Rights Lawyer,” Center for Human Rights in Iran, April 15, 2021.)

The guilty verdict is usually already decided before the court date. The hearing might last 10 minutes and the sentence is generally determined by the prosecutor/interrogator more than the judge. “What we have is interrogators working on behalf of security agencies who bring the charges—and the judges have no independence,” Hadi Ghaemi explains. “They just rubberstamp the indictment brought by the prosecutor working with interrogators, and even the sentences are based on what interrogators tell them.”

Iran’s judiciary, like the rest of the IRI’s theocratic/misogynistic regime, consistently singles out women for the most vengeful punishment if they resist their oppression and revolt.

Prisoners are routinely sentenced to medieval punishments, like lashings, and more than 200 were executed last year.

Lashes is a sanitary and clinical word for the barbaric ripping of human flesh. A January 2017 report by Amnesty International, “Iran: Wave of Floggings, Amputations, and other Vicious Punishments,”  documents how widely these depraved punishments are carried out in Iran.

Nasrin Sotoudeh’s case is one outrageous example: she was sentenced to 78 lashes for daring to defend the “girls of revolution street”—women who refused to wear the hijab (head covering) and protested in public.

If this doesn’t shock your conscience, what will?

All this underscores the urgency of signing and very widely circulating the Campaign’s Emergency Appeal: The Lives of Iran’s Political Prisoners Hang in the Balance—We Must ACT Now.

Go to our website for a beginning list of signatories, and watch for upcoming calls for funds, support, and further plans leading to June 13. There you can also sign up to volunteer for the Emergency Campaign, find ways to help, and encourage others to do likewise via the new What We Can Do tab.

This Appeal needs to be published soon and we call on all those who have not signed it to do so, and all who have signed to circulate it.

We must make our outcry heard around the world including inside Iran.

Our demand to Iran’s regime—free all the political prisoners NOW!

To the U.S. government—no war threats and lift the sanctions!

Narges Mohammadi is a defiant, courageous, and world-renowned representative of the Defenders of Human Rights Center in Iran. Her case captures the tyrannical, fascist character of Iran’s legal system.

She was recently released after having been imprisoned for nearly six years of an original 16-year sentence. During her imprisonment, she was brutalized and sexually assaulted. She describes one incident in which the prison doctor was so brutal that her interrogator had to leave the room. Yet she continues to courageously resist. (See her new interview in Farsi describing in gruesome detail the “white torture” of prolonged solitary confinement. An unofficial/rough English translation by a campaign volunteer is linked here.)

Now, suddenly, on May 22, she was sentenced once again—to two and a half years in prison, two fines, and 80 lashes! Her crime? Reportedly propaganda against the regime “for campaigning against the death penalty and participating in a sit-in in prison in December 2019 to protest the killing of anti-government protesters a month earlier,” according to news reports. In an Instagram post, Mohammadi said one of her charges was having a party and dancing while in prison. She declared she will not “accept any of these sentences.”