On Watching the Film Sir! No Sir!: The True History of How Millions of People in the U.S. and Within the Military Itself Broke With American Chauvinism

From a member of the National Revolution Tour 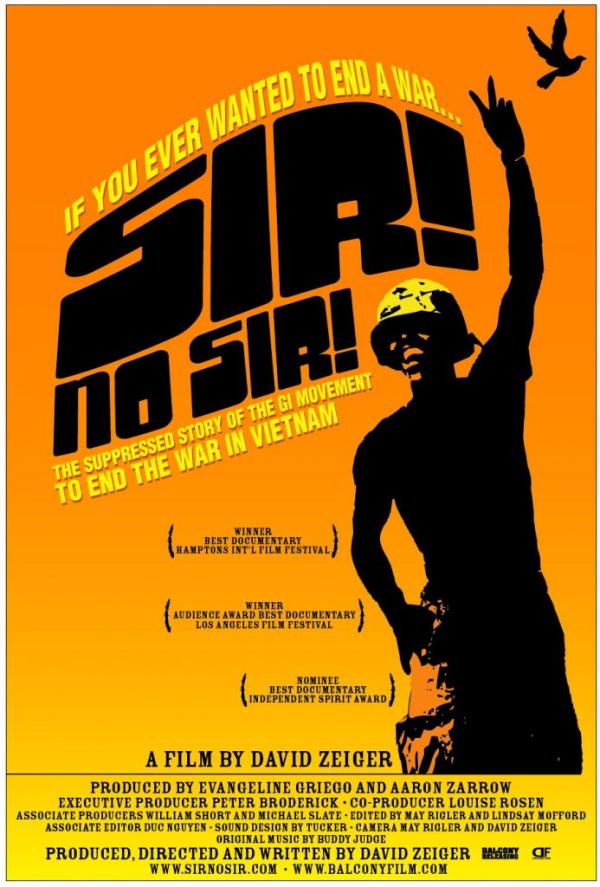 This week I saw the documentary film Sir! No Sir! at a special screening and honestly, it blew my mind. This film exposes a history that has been intentionally hidden from you: the history of the U.S. genocidal and systematic massacre of the Vietnamese people and the incredible heroism of G.I.s who refused to fight “the Man’s” war and organized a truly massive anti-war movement within, and contributed to the near-total collapse of, the United States Armed Forces during the Vietnam War.

As a relatively young person, I’ve been shaped by 9/11, the wars in Iraq and Afghanistan, and the whole culture of people falling over one another to thank soldiers for their “service.” This film had me nearly vomiting on the floor of the theatre. Seeing from the very first frames—the U.S. dropping bombs on the thatched roofs of villages! From the very first moment, you get the sense of an intentional campaign to eliminate the people of Vietnam. You hear the voices of soldiers speaking about how the U.S. measured success in terms of “body count” and competitions between units to see who could get the highest “body count.” I heard about how a body blown apart into pieces—would be a big “score,” because each dismembered limb counted as a separate body. WHAT THE FUCK!

The most affecting part of this film is how when G.I.s got moral clarity so many were willing to risk everything to take a stand for what is right and damn the consequences! It didn't happen all at once. The art of this film is you can follow the journey of these G.I.s who went into this war thinking that Americans are the “good guys.” You feel the betrayal they felt of being systematically lied to. You feel the revulsion and disgust they felt of becoming a “baby killer” for “The Man.”

Something that baffled me was just how much raging debate, struggle, and soul-searching there was among the G.I.s. One person in the film talked about how after search-and-destroy missions during the day and ambushes at night, G.I.s would return to camp and stay up all night debating the morality of the war. G.I.s agonized over the question of what was wrong and what was right and whether this was a war worth fighting. One Black G.I. talks about how they came to realize that the word “gook” (a racial slur against Vietnamese people) means the same thing as “nigger.” Black people, as well as others, increasingly came to see common cause with the Vietnamese and increasingly recognized that their cause was just. People increasingly came to see the real role of the U.S. military as a force for oppression and turned against it. This struck me because as a youth we were taught that the anti-war movement in the 1960s was against the war because killing is bad. This was really a way of trying to bury the fact that millions of people came to recognize that the U.S. is bad!

I had never known just how widespread the resistance within the military was until seeing this film. Think about these facts: nearly 500,000 soldiers went AWOL (Absent Without Official Leave); over 300 underground newspapers were published by anti-war G.I.s; there were over 800 confirmed attempts to kill NCOs and commanding officers; in 1967, 1,365 active-duty soldiers signed a full-page ad in the New York Times opposing the war; in 1971, thousands of G.I.s converged on Washington, D.C. and threw their medals back onto the Capitol steps—with one G.I. famously saying, “If we have to fight again it will be to take these steps.” This doesn't even take into account the many smaller acts taken on daily to “gum-up the works” of the military machine. The U.S. military itself was on the edge of total collapse. It makes so much sense why this history has been completely distorted, rewritten, and hidden from people.

At the end of the film, there was a Q/A with the filmmaker David Zeiger as well as two Vietnam veterans. I asked the panel: where did all this questioning of the war come from? It’s hard to wrap your mind around when in today’s world there is such a lack of asking bigger questions. David Zeiger pulled the lens back to the bigger things happening in the world and within the United States. He brought up that there was a very powerful example being set by revolutionary China, there was an upsurge of national liberation struggles in the world, and this was having a big influence on things. Both on the struggle of Black people and others within the military—and back home in the United States. These larger struggles going on in the world and in the U.S. contributed to broad questioning among people as well as the feeling that people had to take a stand one way or another. You were a part of a broad rising that was going on in the world as a whole.

All three emphasized how meaningful and shaping it was to be a part of a mass upsurge full of so much heroism to fight to end an unjust war. It made me reflect on the rare time we are living in, where an actual revolution could be made. We have a real chance to make our lives count, not only to put an end to unjust wars but to put an end to everything that enslaves and degrades people. These G.I.s modeled having real heart and valor to fight for what is right.

People have been prevented from knowing the true history of how millions of people in this country and within the military itself broke with American chauvinism, put their bodies on the gears of the war machine, and ground it to a halt. It is intentionally being kept from people that this military has been and can be defeated. The rulers of this country do not want people to learn from the infectious example of these G.I.s. There have been over 300 films made about the Vietnam war, but if you haven't seen Sir! No Sir!, YOU'RE IN THE DARK.