“What Good Does Protest Do?”

Letter from a Member of the National Revolution Tour 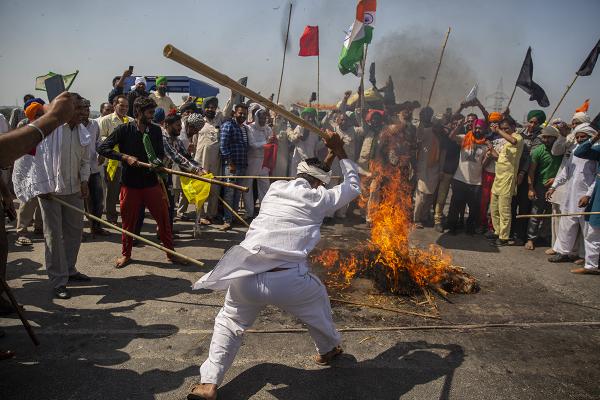 Two days back, Narendra Modi, the Hindu fascist chief of India, did a sudden about-face, agreeing to repeal three agricultural laws that had sparked a mass sustained farmers’ protest for more than a year. This was a stunning reversal for Modi, a fascist strong-man, who green-lighted pogroms against Muslims in the past, has systematically revoked the rights of Muslims in India and propagated a murderous Hindu fascism, crushed dissent and opposition with harsh repression, and portrayed himself as invincible.

As revcom.us goes to press, this is a decisive victory for the farmers’ protests against these laws. These laws would have deregulated and opened up the crucial agricultural sector to much greater and more ruthless capitalist-imperialist exploitation, leaving peasant-farmers much more vulnerable to global “market volatility” in prices, their lands increasingly subject to takeover by large corporate enterprises, and threatening their very livelihoods in a rapidly changing globalized economy. About 60% of India’s 1.4 billion people earn their livelihoods in agriculture, a sector that has been ravaged by the workings of this horrific system. Burdened by unsustainable debt, more than ten thousand farmers and farm laborers committed suicide in 2019 alone [an official statistic, the actual deaths are likely much higher], a real-world human metric [or measure] that results from and illuminates the ugly and horrifically oppressive and exploitative workings of this system.

All of this was going to be supercharged by Modi’s laws, pushed through in a hurry last September. In response, farmers, mainly landowners of average farm size from the state of Punjab, started protesting, setting up encampments outside Delhi, the capital of India, blocking rail tracks and highways with tractors and trucks.

They sustained these protests through a terrible and cold winter with temperatures dipping to near-freezing, through a very hot summer where temperatures are routinely above 100 degrees F, and through waves of the COVID pandemic which hit India particularly hard, especially due to Modi’s handling of the pandemic. Many died due to these incredibly harsh conditions. They withstood demonization and repression. Hindu fascists, including one allegedly led by the son of one of Modi’s ministers, plowed a car into demonstrators, killing eight people. Farmer protesters were branded as “traitors” and “anti-nationals,” a label that carries ominous legal implications in a highly repressive state. The protests were declared “finished” a number of times, including when some protesters crashed India’s biggest military parade with a tractor, and were killed in the event.

Through it all, they persisted, staying focused on the singular demand to repeal these laws, what they perceived as an existential threat to their lives and livelihoods—“it’s a question of life and death … they know they are going to suffer in any case, so might as well suffer there.” 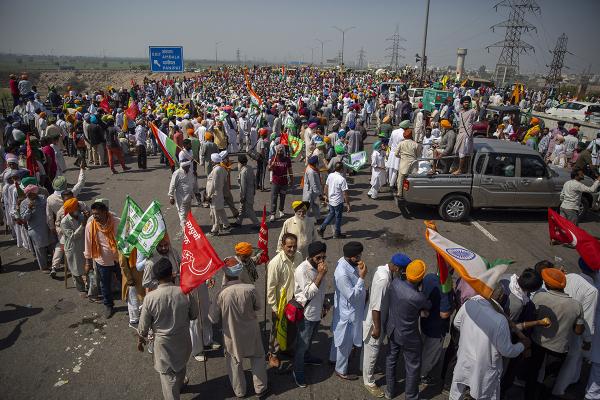 Hundreds of farmers from all over India gather in New Delhi to protest harsh farm laws.    Photo: AP

This heroic, sustained and persistent struggle drew very wide support, internationally and throughout India. The protest encampments sprung up new forms of organization and support—including community kitchens and volunteer medics. It touched a chord with other farmers and started to draw support away from Modi and the Hindu fascists in a crucial election year. It had wide-ranging effects on the stability of Punjab, the “breadbasket” of India, disproportionately responsible for grain output—and a strategically vital state that borders Pakistan, with which tensions have been rising overall. While the exact reasons for Modi’s sudden reversal and capitulation are not fully known, all of this factored in overall—with the protests as the decisive and crucial driving force.

But I write about this for a specific reason: the question is often explicitly posed, “what good does protest do,” including by college students and youth. This is an example where, even though not a revolutionary struggle, the mass protests—some of the largest in recent history—were sustained till goals were achieved, through thick and thin, through hardship and through repression, with sacrifices and with community, and this made a HUGE difference, achieving the “repeal” of these laws, goals which seemed distant, even “impossible” when these protests were first initiated. The victory has emboldened others who hate and oppose this Hindu fascist regime, and it remains to be seen how this gets taken on and multiplied.

Protests alone are not going to solve the problem of capitalist-imperialist exploitation and oppression of the masses of people in India or elsewhere—that will take an ACTUAL Revolution. But in the overall framework, goals and context of making revolution, protests are really important—of people rising up to fight the power, to fight back against oppression; of collectively en masse raising their heads and beginning to think about the bigger questions of why is this the state of humanity and what is the problem, what is the root source of this oppression and exploitation and what is the solution—and all this interrelated to and contributing to the transformation of the people—for Revolution!