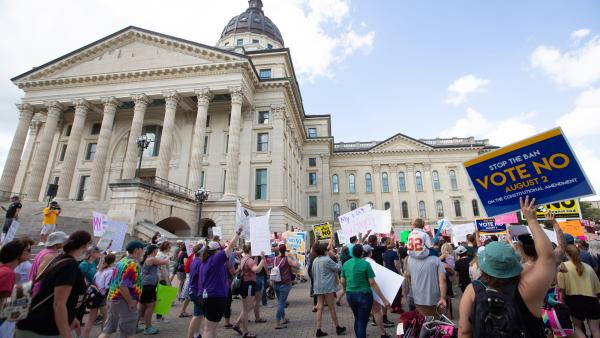 July 30, Topeka, Kansas. Hundreds of people occupied the Kansas Statehouse to protest against an amendment that explicitly states that women do not have a constitutional right to abortion. Many women stepped forward to tell their own personal stories, including one woman who talked about how she needed an abortion when she got out of an abusive relationship. This same day, in Lawrence, Kansas, 60 people gathered at the Douglas County Courthouse to march downtown to protest the amendment. (The amendment was later defeated at the polls on August 2.)    Credit: Twitter @RosieRiveterDFW

On Tuesday, August 2, voters in Kansas overwhelmingly rejected a proposed amendment to the state constitution that would have opened up the pathway for extreme anti-abortion bans. This is a good thing. It means that, at least for now, women across Kansas and at least some in surrounding states where abortion has recently been banned in the wake of the Supreme Court overturning abortion protections nationwide will be able to access abortions in Kansas. But it is crucial that those who support women’s fundamental right to abortion draw the right lessons from this experience and not the wrong lessons. With this in mind, here are four crucial points of orientation:

1There is a tremendous reservoir of potential fury, commitment and determination among millions and millions of women and others throughout society to fight for abortion rights and women’s liberation.

Millions and millions throughout this society are deeply furious and terrified about the growing assault on abortion and the hatred for women that is driving it. The energy and passion with which a great many women and others campaigned against the Kansas amendment provides a window into the depth of fury and energy and commitment that could be and urgently needs to be unleashed in a massive struggle in the streets to win back the legal right to abortion nationwide.

2 “Clever messaging” that obscures how the fight over abortion rights concentrates whether women will be enslaved or emancipated aids the women-haters and fascists.

The Economist concisely summed up the approach taken by the dominant forces of the Democratic Party and the pro-choice establishment this way:

The pro-choice campaign triumphed through smart strategy. Instead of slogans explicitly about abortion, it emphasised personal liberty and privacy. The front of the main leaflet distributed by Kansans for Constitutional Freedom, the cannily named group opposing the amendment, simply read “it’s up to us to keep Kansans free”. Television adverts urged viewers to “say no to more government control.” Ashley All of Kansans for Constitutional Freedom, the main group opposing the amendment, says that such messages resonated with a broad group of voters. “Not just progressives” explains Ms All, but also conservatives and libertarians “who really just don’t want government in their business.”

No! A huge part of why the Christian fascist fanatics have succeeded in seizing more and more political ground, capturing more and more levers of state power all the way up to the Supreme Court, and are now overturning abortion protections and banning abortion in growing numbers of states across the country, is precisely because the Democratic Party and the pro-choice “movement” which has been slavishly subordinated to it has for decades avoided taking them on frontally and calling them out for enslaving women.

What is needed, in contrast, is a full-throated fight for all women to have access in all circumstances of their choosing to LEGAL ABORTION ON DEMAND AND WITHOUT APOLOGY. We need to tell the truth that forced motherhood is female enslavement and unleash the fury of women and others who care about justice to fight with all we’ve got with these stakes in mind.

3 The fight over abortion is not momentary or superficial. It is not just about who will come out ahead in one or another election cycle. It is deeply rooted in the oppression of women and the patriarchal family, and these are deeply rooted in the system of capitalism-imperialism that we live under.

The life span of Roe v. Wade, the Supreme Court decision which legalized abortion nationwide in 1973 and which was overturned this past June, coincided with truly profound changes in the social position of women throughout society and profound changes in the family as an institution. Owing both to major economic changes in the world and in the U.S., as well as to the ferocious struggle of women for their liberation, women have entered into public life and into work in ways that were unheard of just a few generations ago. None of this would’ve been possible without access to abortion and to birth control.

Yet, as Bob Avakian wrote in his 2021 New Year’s Statement:

[T]he elimination of male supremacy is impossible within the confines of this system. This is true because male supremacy has been deeply woven into the fabric of this society, and because this system is based on capitalist commodity relations and exploitation—things are produced to be exchanged (sold), through a process in which masses of people work, for a wage or salary, to create profit that is accumulated by capitalists who employ them and control their work—a system in which the patriarchal family unit remains an essential economic and social component and requirement, even as it is being put under increasing strains. And the fascist section of the ruling class has, over a number of decades now, waged a relentless attack on Constitutional rights, and mobilized their social base of religious fundamentalist fanatics, to forcefully and often violently assert “traditional” patriarchal oppression—with the assault on the right to abortion, and even birth control, a major focus of this attempt to essentially enslave women. (Bolding at the end is mine.]

This should help make clear why the fanatical assault on abortion rights has been as ferocious as it has been over decades—bombing clinics, killing doctors, harassing and shaming millions of women at clinic doors. It explains why they have not remained a fringe movement, but have been elevated within and then increasingly captured the Republican Party and major levers of state power. And it sheds light on why they will not be appeased or thrown off course by losing an electoral referendum here or there.

It also points to why, ultimately, putting an end to the oppression of women and fully defeating this Christian fascist assault on abortion that is so deeply entrenched in this society will take a total revolution. And why, even short of that, millions need to break out of the killing confines of this system’s elections to wage massive political resistance and struggle to beat back this assault.

4 A radical resolution for women is coming. It will be a decisive part of the fight for the future overall. Whether it will be enslaving or emancipating depends on what we do.

Whatever temporary setbacks or local defeats the Christian fascist haters of women may suffer along the way—and let’s be clear, right now, in state after state they are mainly succeeding in banning abortion—they are not going to relent until they are decisively defeated. This can be seen in the fact that, a few days after the Kansas vote, Indiana passed an extremely repressive law against abortion, effectively wiping out the right. As Bob Avakian went on to quote from an earlier work of his in that New Year’s Statement:

The whole question of the position and role of women in society is more and more acutely posing itself in today’s extreme circumstances—this is a powderkeg in the U.S. today. It is not conceivable that all this will find any resolution other than in the most radical terms and through extremely violent means. The question yet to be determined is: will it be a radical reactionary or a radical revolutionary resolution, will it mean the reinforcing of the chains of enslavement or the shattering of the most decisive links in those chains and the opening up of the possibility of realizing the complete elimination of all forms of such enslavement.

It is time for all those who care about women and justice overall to cast off illusions and prepare for struggle. To break out of the killing confines of this system’s elections and the capitulating terms of the Democrats and the so-called “movement.” To unleash the fury of women as a powerful force standing up against this fascist tide and demanding legal abortion on demand and without apology nationwide. To unite all who can be united in this fight from many different perspectives standing together as is being fought for by Rise Up 4 Abortion Rights. And, for growing numbers of people to lift their sights to and wage this fight as an organized part of the movement for revolution so that we can truly and finally break all the chains.