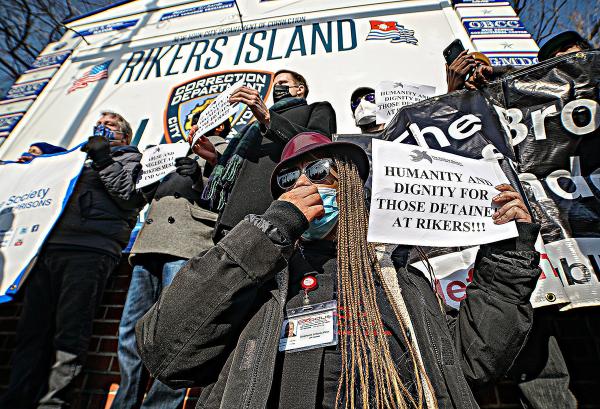 About 200 prisoners in Rikers Island prison in New York City have been on a hunger strike since Saturday, January 8. In the face of constant repression, threat of retaliation, and demonization, these brave prisoners are taking a heroic stand. The system they are standing up to offers them nothing but more terror and punishment,  yet they are standing strong to let the world know they refuse to accept conditions that deny them basic human rights. All those who stand against injustice need to stand with and support these prisoners and spread their message of defiance.

The prisoners have been able to voice their demands through lawyers, voicemails and other ways, telling the world about how they are subjected to inhumane conditions and denied basic rights: including lack of medical care, no access to the law library services, limited items in the commissary, mail being lost or severely delayed, court days continuously adjourned. All this is added to the severe danger of COVID-19. Less than half of those in Rikers have been fully vaccinated, and more than 370 have recently tested positive for the virus. Lack of heat has also become an increasingly urgent issue given that New York City has been experiencing single-digit temperatures in recent days.

85% of the 5,400 prisoners at Rikers have not been found guilty of anything—they are locked up in Rikers simply because they cannot afford bail. 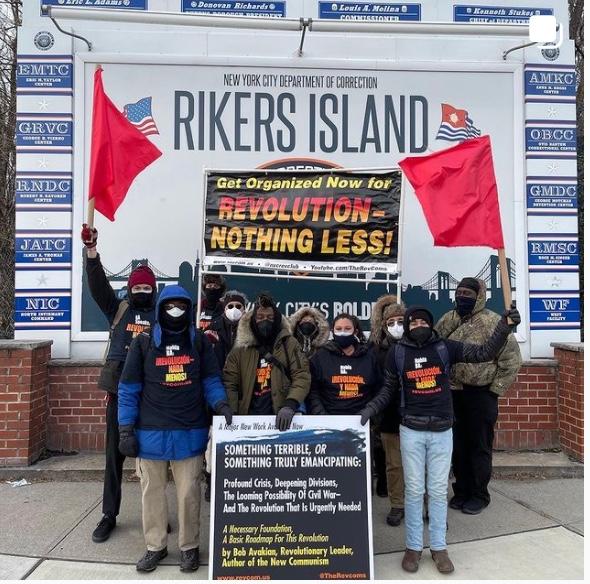 On Saturday, January 16, a group of about 12 revolutionaries, including members of the Revolution Club, gathered outside Rikers Island jail to express solidarity for the prisoners on hunger strike. People marched right up to the entrance chanting, “What’s the problem—the whole damn system! What’s the solution—Revolution!” Carl Dix, longtime revolutionary, a follower of Bob Avakian, and co-initiator with Cornel West of the Campaign to Stop “Stop-and-Frisk,” spoke about the need to stand with the hunger strikers at Rikers, how they are responding to horrific abuses and are right to do so. He said that the horrors at Rikers are not new and concentrate and typify the way people are mistreated in prisons throughout the United States—that this is a part of a slow genocide targeting Black and Brown people, something that can’t be reformed away, but can only be gotten rid of by getting rid of this system through an actual revolution. (See Carl Dix’s January 14 statement on the Rikers hunger strikers here.)

Over the years there has been much outcry and protest against the conditions at Rikers—from prisoners inside, formerly incarcerated, loved ones of those incarcerated at Rikers, and others. But despite continuing outcry, and media reports of the conditions inside Rikers, including how conditions have led to violence among prisoners, the Department of Corrections has dismissed the prisoners‘ concerns and demands. And promises and platitudes from city officials about “closing Rikers” amount to empty talk about some far off future possibility with no real action.

After some elected city officials visited Rikers, one City Council member, Shekar Krishnan said, “Rikers Island is the most urgent humanitarian and civil rights crisis of our city.... We must end the practice of solitary confinement. It is torture. It has devastated so many, especially our LGBT+ and trans communities in particular. We must shut down Rikers Island now. Shut it down.”

While conditions at Rikers have always been horrible, there is evidence that conditions have deteriorated even further. In addition to the deaths at Rikers, incidents of self-harm have nearly doubled over the last year, violence has increased, and there have been reports that the intake area where prisoners are first processed is infested with vermin and there is a shortage of beds and working toilets.

Mayor Adams called Rikers a “failed correctional facility,” where many of the crises could be boiled down to “failed communication.” This is a criminal and outrageous statement. Rikers, like other jails and prisons all across the United States, are not about rehabilitation, they are about punishment and confinement of whole sections of oppressed people who this system has no future for. And Rikers relies on inhumane conditions and brutality to keep prisoners under control.

The Rikers prisoners on hunger strike are standing up to all this, boldly daring to risk perhaps even their lives—to call on the world to stand with them, and to denounce and call for an end to the barbaric way they are treated.