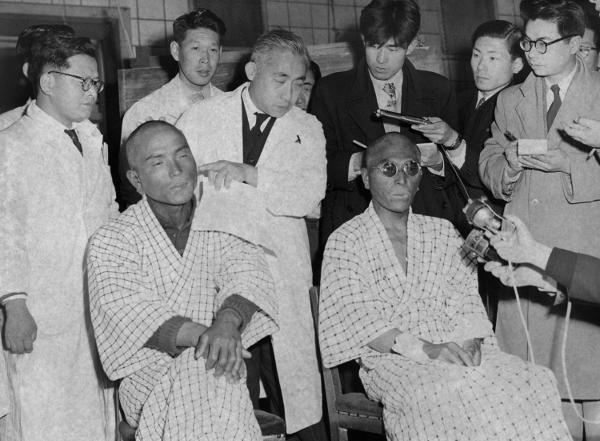 Two Japanese fishermen, among 23 showered with radioactive ash from the thermonuclear explosion at Bikini on March 1, 1954, show burns they suffered. Photo: AP

Between 1946 and 1962, the U.S. government conducted nuclear tests in the Pacific Ocean, contaminating thousands of Pacific Islands. Entire peoples suffered and continue to suffer from the effects of this nuclear testing up to today.

In 1946, a year after the end of World War 2 and the nuclear bombing of Hiroshima and Nagasaki (see American Crime #97), the U.S. launched its first nuclear test on Bikini Atoll, in the Marshall Islands.1 Between 1947 and 1962 the U.S. conducted 102 atmospheric and underwater tests in the Pacific Proving Ground—comprising 80 percent of all nuclear contamination in the U.S. history of nuclear testing. This is roughly equivalent to 1.7 Hiroshima explosions every single day for the 12 years between 1946 and 1958. Of these tests, 67 were atomic bombs.

The largest of the atomic tests, code-named “Bravo” and 1,000 times greater than the bomb used on Hiroshima, completely annihilated three islands, left a huge crater on the atoll’s reef, and generated an “atomic wave” that washed over the entire island of Bikini. The result was so horrific that an American official warned Marshallese leaders: “If anyone breathes a word of this they’ll be shot before sunrise.”

Some islands were evacuated prior to testing and were obliterated. But other islands where tests were done were still inhabited—and people there were exposed to huge amounts of nuclear fallout. Some of the ships hit by nuclear tests were “decontaminated” by Pacific Islanders who were hired without being warned of the effects of exposure to the radiation.

Inhabitants of Rongelap (an atoll about 90 miles from Bikini) suffered acute radiation illness in 1954 when 2 inches of radioactive fallout from “Bravo” coated the ground. People suffered nausea, vomiting, burns, hair loss, hypothyroidism (hyper-active thyroid, bone marrow shutdown, and among pregnant women, miscarriages. Three years later, in 1957, the U.S. returned inhabitants to Rongelap, declaring the island safe. But no clean-up was ever done! Thirty years later 95% of the residents who lived on the island between 1948 and 1954 had thyroid cancer and the rate today is 200% above the national baseline.

Recently I was reading an essay called “Disarming Images” about an exhibit of art for nuclear disarmament which was held in the early 1980s. And I noticed that the author of this essay points out that according to the dictionary, Webster’s Third International Dictionary, the name “bikini” given to the bathing suit comes from comparing “the effects of a scantily clad woman to the effects of an atomic bomb.” When you think about this, and you think about the horrendous death, destruction, mutilation and suffering alive before dying that was caused by the atomic bombs that the U.S. dropped on Japan, and what would result from the much more powerful nuclear weapons these monsters have today—when you think about all that, and you think about the reasons for naming the bikini after all that, and what kind of view of women this promotes—do you need any other proof about how sick this system is, and how sick is the dominant culture it produces and promotes?

Many islanders became guinea pigs in a secret medical experiment called Project 4.1, set up by the U.S. to study the effects of radiation on human beings. Dr. Merrill Eisenbud, one of the leading scientists of the Atomic Energy Commission (AEC) speaking in favor of nuclear testing said, “It will be very interesting to go back and get good environmental data, how many per square mile, what isotopes are involved and a sample of food changes in many humans through their urines, so as to get a measure of the human uptake when people live in a contaminated environment. Now, data of this type has never been available.”

People in the Marshall Islands continue to suffer from chronic, long-term exposure to radioactive isotopes concentrated in plants, animals, and fruit. At least 24 types of cancer occur at higher than normal rates, including in subsequent generations. Many were forced to evacuate from their islands and relocate to other islands to live in squalid conditions on other atolls. And lack of modern health care and education has forced tens of thousands to move to large population centers—primarily in Guam and Hawai`i, where they face intense discrimination. The inability to earn enough money to pay for housing, coupled with discrimination has forced many thousands to live in homeless encampments.

The list of criminals complicit in this crime is endless. In 1947 the U.S. government got the United Nations to designate all of Micronesia—which the Marshall Islands are a part of—as a “Strategic Trust Territory.” This was the first and only trusteeship ever granted by the UN. Only five days later the U.S. established the Marshall Islands as the “Pacific Proving Ground.” The U.S. Atomic Energy Commission continued tests after the Manhattan Project refused to continue.

The Manhattan Project (a research and development project that produced the first nuclear weapons during World War 2, led by the U.S. with the support of the UK and Canada), was responsible for the development of the atomic bomb, Trinity, nuclear tests in Nevada, giving the go-ahead for the bombing of Hiroshima and Nagasaki, and then the initial Bikini tests.

Henry Kissinger, when questioned later about the danger posed to Micronesia by U.S. nuclear testing said, “There are only 90,000 people out there. Who gives a damn?”

In February, 1946, U.S. Commodore Ben H. Wyatt, military governor of the Marshall Islands, told Bikini residents that the U.S. intended to test atomic bombs “for the good of mankind and to end all world wars.” The U.S.’s formal alibi was that it needed data on the effect of nuclear fallout on U.S. military personnel and equipment.

After emerging victorious from World War 2, the U.S. was intent on demonstrating its imperialist domination of the world. The displays of “nuclear might” by the U.S. were meant to send a message to the Soviet Union (where capitalism was restored in 1956), socialist China, and rival imperialist powers. The nuclear tests were NOT done “in secret”; they were powerful propaganda pieces. The U.S. brought in and invited audiences of journalists, scientists, military officers, congressmen, and foreign observers to witness the bombs’ destructive power. Their reports of shock and awe quickly spread around the world. A historian wrote that the tests “helped restore respect for the power of the bomb.”

The U.S.’s interest in the Pacific has always been predominantly military and strategic. The establishment of the “U.S. Proving Ground” in the Pacific laid the basis for the further U.S. militarization of the entire Pacific region.

1. The Marshall Islands is a country made up of over 1,000 islands, located in the Pacific Ocean, near the equator. An atoll is a ring-shaped reef, island, or chain of islands formed of coral. [back]