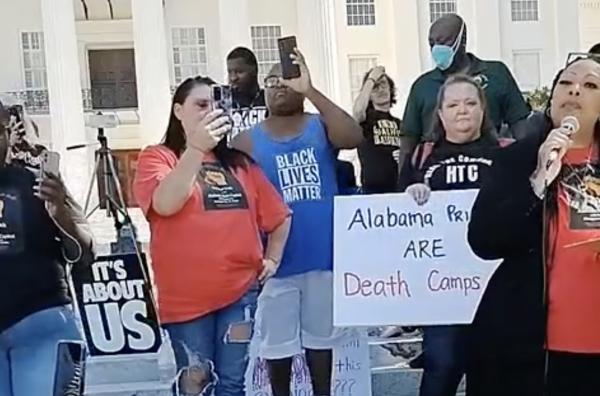 The strike by prisoners throughout the Alabama prison system was placed “on hold” following an October 14 rally by some 200 people outside the Alabama State Capitol supporting their demands. This came after three weeks of prisoners refusing to work and maintaining unity while being fed only two cold, small “meals” a day; and being deprived of medical care, clean laundry, and access to prison commissaries for essential nutritional, hygiene and medical products. Loved ones of incarcerated men and women reported packages not being delivered and being unable to contact prisoners to verify their health and safety, and in at least one instance, an activist placed in segregation as punishment for his role in the strike.

Diyawn Caldwell, president of Both Sides of the Wall, whose husband is incarcerated in Alabama, told revcom.us, “The strike has not ended, it has been placed on hold to allow the Governor, Legislators, and Alabama Department of Corrections (ADOC) the opportunity to address and meet our grievances and demands. However, if they don’t give us the opportunity to sit down with them and make a collective effort to address and take some concrete actions to resolve the issues set-forth, then the men/women of the ADOC will resume the strike at an undisclosed time.” 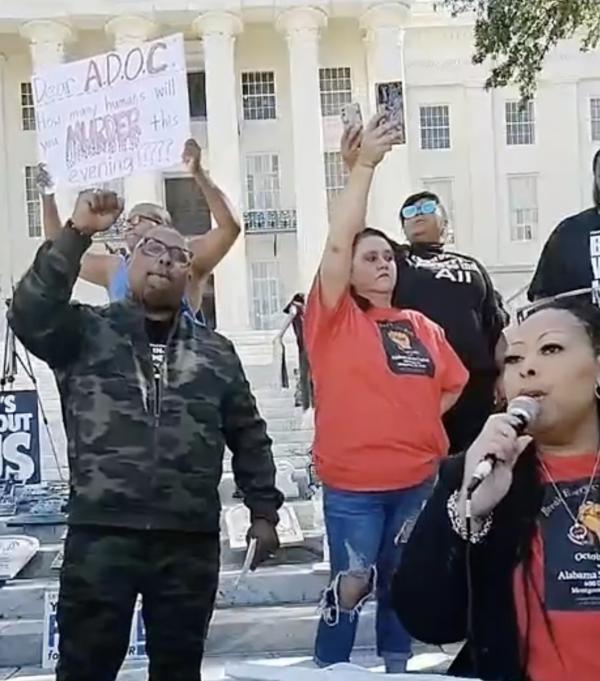 Thousands of prisoners across Alabama began the strike on September 26 demanding that “The U.S. justice department intervene and put an immediate stop to Alabama’s systematic denial of our human dignity and rights.” In the face of repression by authorities, and the ways in which the prison system (and this capitalist-imperialist system in general) sets people against each other, they united to demand an end to “sentencing laws that led to overcrowding, numerous deaths, severe physical injury, as well as mental anguish to incarcerated individuals.”

As we have reported, Alabama prisons are body- and soul-crushing death camps, vastly disproportionately aimed at Black people. Prisoners are packed into jails built to hold half as many people. Food, air, and living conditions are unfit for human survival.  In just the 30 days from June 15 to July 15 of this year, for example, 11 men incarcerated at Donaldson Correctional Facility near Bessemer, Alabama, died. The majority of these deaths involved younger men who, according to family members, did not suffer preexisting health conditions apart from injuries sustained during assaults at the prison.

The Montgomery Advertiser reported a U.S. Department of Justice finding that “Uses of force happen so regularly in Alabama’s prisons that some officers appear accustomed to that level of violence and consider it normal. In short, in Alabama’s prisons, cruel treatment of prisoners by staff is common and de-escalation techniques are regularly ignored.”

While 27 percent of the people in Alabama are Black, Black people make up 56 percent of those in prison, and 75 percent of people serving life without parole sentences under Alabama’s “three strikes” law are Black (see Mass Incarceration and Unconstitutional Prisons).

A key demand of the prisoners, their loved ones, and their supporters is a legitimate parole system. The Alabama Board of Pardons and Paroles (BOPP) received 4,232 requests for parole in the year ending September 30, 2021. Had it followed its own guidelines, 3,216 would have been released on parole. But the BOPP is not required to follow even its own guidelines. It released only 648 prisoners. Diyawn Caldwell told revcom.us that this creates a situation where the perception among prisoners is that “you got more people coming out in body bags than on parole.” 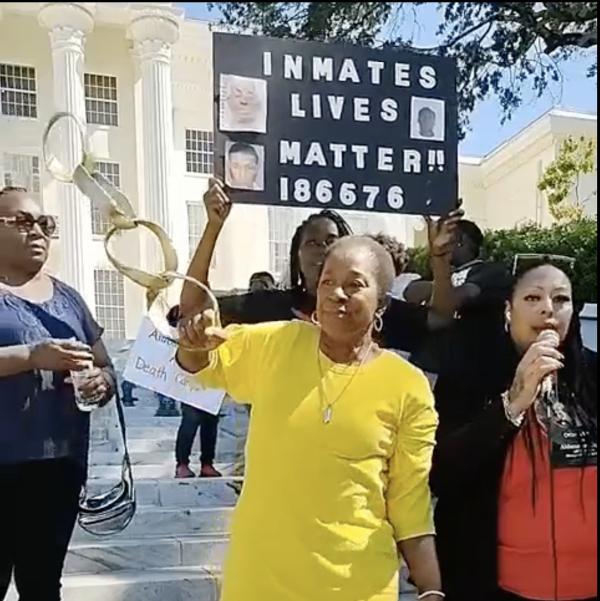 Loved ones and supporters of the Alabama prisoners' strike rally at the Alabama State House on October 14.    Photo: Screengrab

People must be vigilant in ensuring that there is no retaliation against prisoners who exercised their right not to work. Diyawn Caldwell emphasized to revcom.us that, “There isn’t anything in their sentencing paperwork, nor is there anything contractual saying they are required to work. So, the burden isn’t on the incarcerated citizens to keep up the daily operations of the prisons, the burden lies upon the state of Alabama, the Governor, commissioner, and the ADOC to ensure the daily operations are performed to the guidelines, policies, and procedures all while staying within the constitutional rights of the incarcerated citizens.”

Caldwell added: “We will continue our efforts to garner attention through upcoming rallies, protest, town halls, and Q&A panels on the outside while the men and women allow the ADOC to treat our elderly and medically incarcerated citizens with the care they need and attain the proper nourishment.”

The heroic sacrifices being made by the prisoners and the ways in which they are confronting the need to transform their outlook point to the significance and weight of a statement by Bob Avakian (BA), the leader of the revolution. That statement is in the book BAsics, which is the handbook for the revolution (available online including as a free download for Android phones). It has particular applicability to this moment, and captures much about the emancipating revolution Bob Avakian is leading and the kind of leader he is.

An Appeal to Those the System Has Cast Off

Here I am speaking not only to prisoners but to those whose life is lived on the desperate edge, whether or not they find some work; to those without work or even homes; to all those the system and its enforcers treat as so much human waste material.

Raise your sights above the degradation and madness, the muck and demoralization, above the individual battle to survive and to “be somebody” on the terms of the imperialists—of fouler, more monstrous criminals than mythology has ever invented or jails ever held. Become a part of the human saviors of humanity: the gravediggers of this system and the bearers of the future communist society.

This is not just talk or an attempt to make poetry here: there are great tasks to be fulfilled, great struggles to be carried out, and yes great sacrifices to be made to accomplish all this. But there is a world to save—and to win—and in that process those the system has counted as nothing can count for a great deal. They represent a great reserve force that must become an active force for the proletarian revolution.