To all those who marched for Abortion Rights on Saturday, October 2:
WELCOME TO THE REVOLUTION!

If you joined the Break ALL the Chains contingents: Unleash the Fury of Women As a Mighty Force for Revolution... if you met the Revolution Club/the revcoms... if you are agonizing about the future for women and humanity, you are in the right place!

“Let’s get down to basics: We need a revolution—nothing less!”

“To everyone who can’t stand this world the way it is... who is sick and tired of so many people being treated as less than human... everyone who has the heart to fight for something that is really worth fighting for: You need to be part of this revolution.

“This revolution is not just 'a good idea'—it is actually possible.”

— FROM THE REVCOMS (REVCOM.US):
A DECLARATION, A CALL TO GET ORGANIZED NOW
FOR A REAL REVOLUTION

Read this Declaration and Call from the revcoms HERE to be part
of getting organized NOW for a real revolution.

A Radical Change Is Coming—Will It Be Reactionary Or Revolutionary?

GO HERE to find out:
Why are these fascists so determined to gut the right to abortion? What are the stakes of this?
What do we need to do — and not do — to STOP these fascist attacks?
Why do we say “patriarchy and capitalism: you can't end one without the other — revolution, nothing less”?

HOW DO I JOIN THE REVOLUTION?

1 Answer the Call and be part of getting organized NOW for a real revolution. Join a Zoom discussion to find out more.

Sign up HERE, DM us on social media @therevcoms or write getorganizedforrevolutiontour @ gmail.com. Or pull your friends together and let us know if you want a revcom to join.

Organizing people into this revolution means reaching out to all sorts of people—not just where there are protests and rebellions against oppression and injustice, but everywhere throughout society—spreading the word about revolution and getting people together (in real life and online) to grapple with why an actual revolution is necessary, what such a revolution involves, and what kind of society this is aiming for. This will enable people who are new to the revolution to themselves become organizers for this revolution and to recruit more and more people to do the same.

2 Find out about Bob Avakian—the work he’s done and the leadership he’s providing.

To make this revolution a reality, we need leadership with the scientific method, the strategy and program that can shine a light through the madness and chaos that this system is constantly creating and can lead in carving the path forward out of this madness to the radically new world we need. AND WE HAVE THAT LEADERSHIP—IN BOB AVAKIAN (BA). BA is the architect of a whole new framework for the liberation of all oppressed people and the emancipation of all humanity: the new communism. We are followers of BA. And you need to become followers of BA too. There never has been a leader like this in this country and there is no other leader like this in the world now. We cannot afford not to follow this leadership if we ever want to get free and put an end to this madness.

You cannot break all the chains, except one. You cannot say you want to be free of exploitation and oppression, except you want to keep the oppression of women by men. You can't say you want to liberate humanity yet keep one half of the people enslaved to the other half. The oppression of women is completely bound up with the division of society into masters and slaves, exploiters and exploited, and the ending of all such conditions is impossible without the complete liberation of women. All this is why women have a tremendous role to play not only in making revolution but in making sure there is all-the-way revolution. The fury of women can and must be fully unleashed as a mighty force for proletarian revolution. 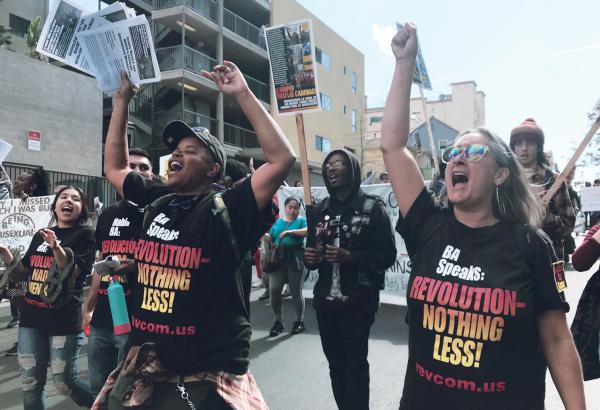 5 Get with those representing for this revolution right now: become part of the Revolution Clubs around the country. To learn more, to join one or to start one, go to revcom.us/revolutionclub 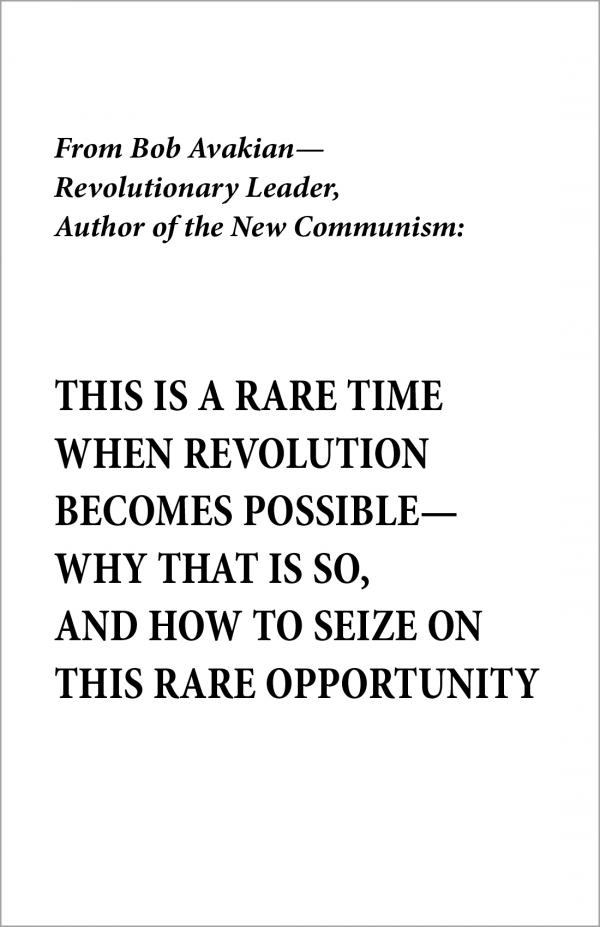 With these economic changes have come significant changes in attitudes and expectations—and very significant strains not only on the fabric of the family but of social relations more broadly.... The whole question of the position and role of women in society is more and more acutely posing itself in today’s extreme circumstances—this is a powderkeg in the U.S. today. It is not conceivable that all this will find any resolution other than in the most radical terms and through extremely violent means. The question yet to be determined is: will it be a radical reactionary or a radical revolutionary resolution, will it mean the reinforcing of the chains of enslavement or the shattering of the most decisive links in those chains and the opening up of the possibility of realizing the complete elimination of all forms of such enslavement.

Look at all these beautiful children who are female in the world. And in addition to all the other outrages which I have referred to, in terms of children throughout the slums and shantytowns of the Third World, in addition to all the horrors that will be heaped on them—the actual living in garbage and human waste in the hundreds of millions as their fate, laid out before them, yes, even before they are born—there is, on top of this, for those children who are born female, the horror of everything that this will bring simply because they are female in a world of male domination. And this is true not only in the Third World. In “modern” countries like the U.S. as well, the statistics barely capture it: the millions who will be raped; the millions more who will be routinely demeaned, deceived, degraded, and all too often brutalized by those who are supposed to be their most intimate lovers; the way in which so many women will be shamed, hounded and harassed if they seek to exercise reproductive rights through abortion, or even birth control; the many who will be forced into prostitution and pornography; and all those who—if they do not have that particular fate, and even if they achieve some success in this “new world” where supposedly there are no barriers for women—will be surrounded on every side, and insulted at every moment, by a society and a culture which degrades women, on the streets, in the schools and workplaces, in the home, on a daily basis and in countless ways.

Why are these fascists so determined to gut the right to abortion? What are the stakes of this?
What do we need to do — and not do — to STOP these fascist attacks?
Why do we say “patriarchy and capitalism: you can't end one without the other — revolution, nothing less”?

The Right to Abortion: The New York Times Rationale for Surrender and Why There Can Be No Compromise—and No Going Back

For All Those Telling Us to Dig In For a Decades-Long, Gradual Struggle to Preserve a Woman’s Fundamental Right to Control Her Own Body

In the Face of the Greatest Assault on Abortion in Nearly 50 Years: Focusing Mainly on “Self-Managed Abortion” Is a Recipe for Catastrophe

We Should Not Want to “Own” Oppression, We Should Want to END It

Why Do We Say That Forced Motherhood Is Female Enslavement?

by a member of the National Revolution Tour