Fighting to Get Beyond the Breakwaters with the BA Interviews: A Report From Chicago

from members of the Revolution Club, Chicago

In the Revolution Club, we held a meeting to discuss orientation and plans for how to get beyond those we already know, to the thousands of brand new people who need to watch the new three-part interview series with Bob Avakian, BA, as decisive to bringing forward a revolutionary people as quickly as possible. The simple but profound essence of this is captured and concentrated in the title for the three interviews, “Up Close and Personal with Bob Avakian: Heart and Soul & Hard-Core for Revolution.” And we have come to appreciate that more deeply. In the discussion, someone pointed out that it is much easier, and safer, to swim in a peaceful lagoon inside the breakwaters, but we need to get beyond the breakwaters and into the choppy seas in order to make these breakthroughs.

A point of orientation we discussed was that those who are already excited and looking forward to these Interviews need to become an active force working to bring others into this. This is going to involve a lot of struggle, including with those who are partisan to some degree already, to unleash them fully to go out into the world and carry out the kind of struggle that can bring forward others. 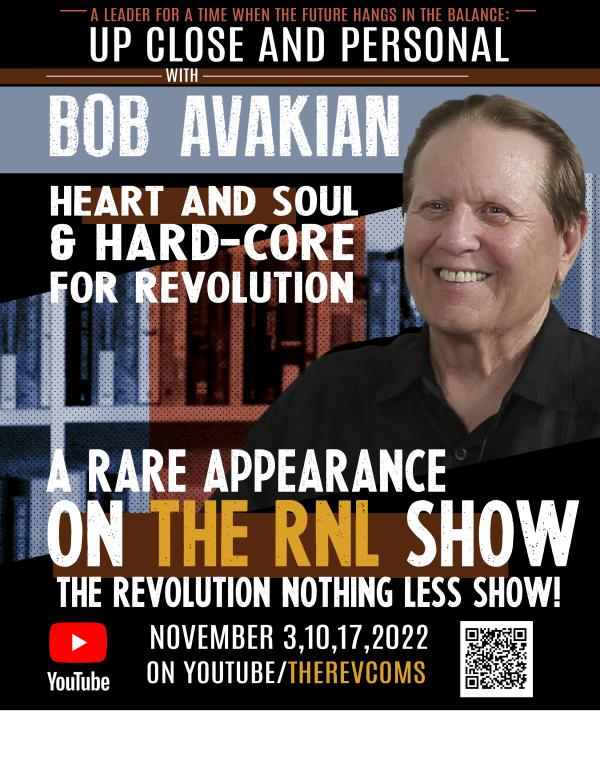 While the Club here is very small in terms of its active core that can go out broadly, it does have a lot of good will and ties from over the years, and there is especially a layer of people who have a great deal of respect and love for BA. While the principal thing overall has to be reaching out to new people, especially among those who catch the hardest hell in this society, as well as all kinds of other people who are outraged or even deeply concerned about where things are going—secondarily, some of the people whom we’ve known for years and from different struggles and other periods of our work can play an important role in doing this too in different ways.

One example is that two longtime friends of the Revolution Club who had made statements defending BA from recent attacks were at our watch party for The RNL Show episode 124 which announced the interview series and aired the sneak preview of BA (which BTW provoked controversy about the U.S.’s role in Ukraine and the danger of nuclear war). We realized later that we were not actively involving both of them based on this orientation, especially now that we have publicity materials. But we underestimated them. We discovered both had already started taking this to new people—one at work and the other at his weekly performance at a South Side club.

As part of this orientation, it is also sinking in that we need to figure out how to maximize the role a well-known and respected Club member can play in all this. He has an incredible mix of people he knows. For instance ex-prisoners who he constantly runs into or points out to us as we drive around the South Side, from doing time together. Then there are also social forces who were involved in the struggle against mass incarceration and solitary confinement, including the people that succeeded in closing down a super max prison. This stretches into important artistic circles. He also knows people working to stop the violence among the youth—many of them ex-gang members. It is soooo many people, it is almost hard to know where to focus, but we see him as a very important “influencer,” and we want to work together with him to maximize his and our impact. One idea he had was getting out palm cards at the various centers the OGs operate, aiming to reach the youth that connect up there.

In our meeting, we recognized that reaching many new people will require struggling against outright avoiding or refusing to go there. These “objections” need to be surfaced even if they are not explicitly raised in response to the promotion we are doing. We also wrangled with welcoming the controversy and what the Revolution Club in LA and the National Get Organized for an Actual Revolution Tour has been modeling in provoking and challenging people both on line and IRL. This is important orientation—that this is not simply about an informational campaign to “get the word out,” but generating controversy and getting this out in front of large blocs of people and contributing to the dynamic of people hearing about this from many different directions. We have been promoting the videos from these actions.

So while we can’t do as much IRL, we are grappling with how to carry that orientation into the IRL outings. As we write, we are going to a protest in support of the uprising in Iran this weekend. Our experience at these protests has been increasingly contentious with organizers trying to keep us “controlled.” We are going with a bold presence, both with the latest CPI (MLM) statement and the invite to the BA interview premiere, and two very large posters, one of the meme for the Iranians' statement and the others of new poster for The RNL Show BA interviews. [Update: there were probably 1,000 people at this “human chain” protest and a distinct change when the “handlers” didn’t try to constrain us, and many people both got the materials and thanked us as the few non-Iranians present for our unwavering support of the struggle in Iran. Some younger Iranians told us they don’t want any of the “big powers” dominating the uprising for their ends.]

We are also planning to get out big in Hyde Park (where the premiere in our city is being held) IRL when Club members have a day off work. This includes getting to the University of Chicago, the main high school and the neighborhood overall. We need to double down on how to craft our message and generate the kind of controversy needed to ramp things up. One idea is having someone in a hazmat suit and going after the whole “staying in your lane” while nuclear war is looming on the horizon. Whatever we decide, we will work on being able to get social media about this too.

Reaching Out to All Strata

While the Club was at the Iran protest, two comrades took out the promotional materials for the interview series to the audience and presenters at the Chicago Humanities Festival in Hyde Park. One event was the performance artist Jefferson Pindar presenting his project Red Summer of 1919. The other was a presentation by the famed journalist Seymour Hersh, who does searing exposure of the crimes of the U.S. from the Vietnam My Lai massacre (which he exposed originally) and through all administrations, Democrat and Republican. Hersh sounded the alarm about nuclear war and was scathing in critiquing the U.S. media for its portrayal of the U.S. as the good guy in Ukraine. A side note: one person who got the flyer at this event remarked, “I just got an email about this last night,” and it turned out that the email had been sent to a list of professional colleagues by the same comrade flyering!

Reaching out broadly means breaking out of the stereotypical idea that only other political “activists” would be interested in this rather than looking at all the spheres of life where there are decent and concerned people (for example in sports, arts, science, education...) and thinking broadly about the potential there and not just the usual suspects.

In the same spirit, we have tried to systematize some of the many people who should be reached around the new interviews with BA, including people who know of BA but may never have seriously engaged BA’s work, or who have not known BA “up close and personal” as a revolutionary leader and the scope of what he thinks about, or the vision of a future socialist society on the road to communism.

The acuteness of the existential threats, the jolts that are happening even around the midterm elections, the anxiety about the future—all this can set the stage for things to rapidly change. A small example, a group of law professors at one prominent university clicked to watch the sneak preview, something that has not happened before. Our speculation is that one person probably called it to others’ attention, which led to this cluster.  Of course, we are following up to learn more.

We need to keep returning to the importance of these interviews and our orientation that this is not simply spreading information... but that it is struggle to crack open the potential and get a very different dynamic and polarization going in society on the side of a future that is truly emancipating.