Hey New York Times: Enough of your bullshit!
It’s THIS SYSTEM that is killing us now!

From The Environment Writers Group, Revcom.us 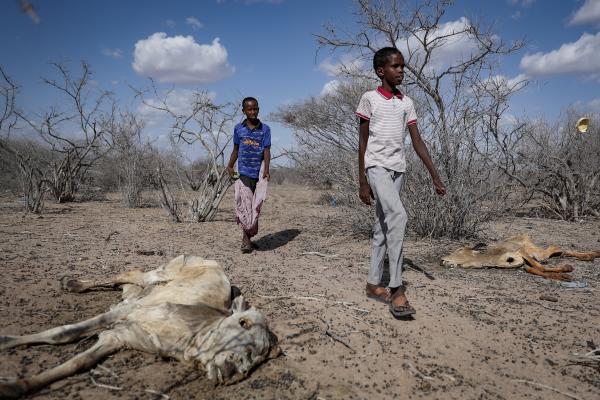 Children of herders walk past cattle carcasses during drought in the desert in Kenya.    Photo: AP

The New York Times published an op-ed this past week which was outrageously and sickeningly titled “Enough About Climate Change. Air Pollution Is Killing Us Now.” The essence of the article is this: It would be easier to influence politicians and the public if we just stopped talking about climate change and instead talked about the more immediate issue of air pollution. This is because 1) air pollution is less politicized than climate change; 2) air pollution is allegedly a more pressing, immediate issue, and would therefore speak directly to people’s self-interest; 3) Addressing climate change through air pollution would purportedly allow the federal government to exercise its authority over issues of public health and thus maybe, someday, sneak in restrictions on greenhouse gas emissions.

The amount of deadly delusions, poisonous American chauvinism, unconscionable “realpolitik,” and dangerously “wishful” thinking packed into this one article is staggering.

First of all: What kind of fucking world is this, where one of the most profound and existential crises humanity and the planet has ever faced has to be “reframed,” watered down and “depoliticized” in order to get addressed? That talking straight up about the fact that we’re on the precipice of global societal and ecosystemic collapse and need to do something about it is “politically divisive” speaks to not only how rabidly anti-science and anti-reality the Republi-fascists are, but also of how this ENTIRE system is COMPLETELY and UTTERLY incapable of dealing with this problem in any meaningful sense.

Further, not only is it completely untrue that climate change is some far-off future problem—people around the world, in their millions, are already feeling the effects of climate change now. Parts of South Asia are facing the most devastating heat waves in history. But more crucially, the claim that the only way to get people to care about climate change is by appealing to their naked self-interest is demonstrably untrue, and obscures the real reasons for inaction. There is no such thing as an “inherently selfish human nature,” and people CAN BE and ARE motivated by more than narrow selfishness. And climate change has not been meaningfully addressed—fossil fuels continue to be burned, vast carbon-sucking forests continue to be cleared, and new oil pipelines continue to be built—NOT because “people don’t care,” but because fossil fuels are strategic and essential to the capitalist-imperialist system. THIS SYSTEM, and not “people,” is the problem.

Finally, the idea that climate change can somehow be disconnected from air pollution is not only monumentally stupid and illogical, it plays into the noxious notion that there can somehow be “unity” and “agreement” with the Republi-fascist maniacs who are anti-science, OPEN climate-change deniers! Or as if the fascists will somehow be “fooled” into supporting efforts to mitigate fossil fuel use—when burning fossil fuels is, in fact, a central part of their political platform and ideological position—by hiding it under the banner of air pollution!!! 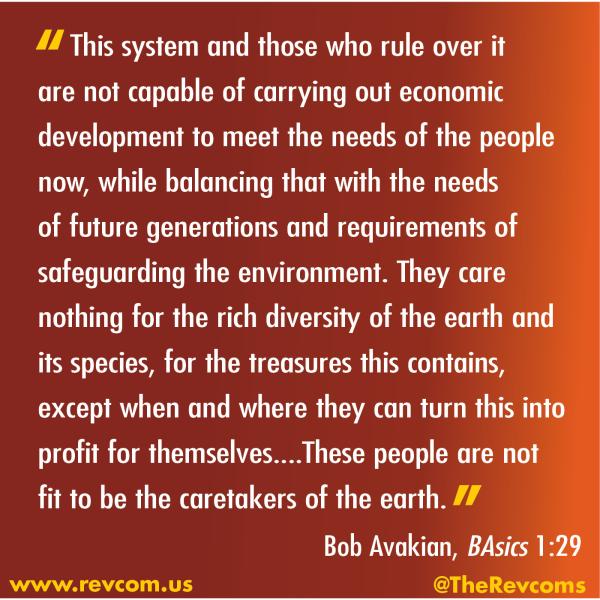 Climate change is a GLOBAL EMERGENCY of staggering proportions. It could very well mean the end of organized human existence as we know it, if the necessary measures aren’t taken with all deliberate speed. Hundreds of millions of lives hang in the balance. This was the message and clarion call of actions taken by scientists globally a couple of weeks back (see “Scientists Around the World Sound the Alarm—We ARE in a Climate EMERGENCY”)—which the New York Times conveniently did not report.

And in order to prevent climate change, WE NEED SYSTEM CHANGE—a REAL REVOLUTION.

So, to the New York Times we say: Enough of your bullshit. It’s THIS SYSTEM that’s killing us now.