IEC Demands Freedom for Narges and All Iran's Political Prisoners

Editors’ note: We received the following from the International Emergency Campaign to Free Iran’s Political Prisoners

On November 16, 2021, the courageous Iranian human rights defender and journalist Narges Mohammadi was detained and taken to Iran’s notorious Evin prison to serve yet another prison sentence, this time for 30 months plus 80 lashes on charges of "propaganda against the political system, slander and rebellion against the prison administration."  She’s being held in solitary confinement and prevented from contacting her family, according to her husband Taghi Rahmani. 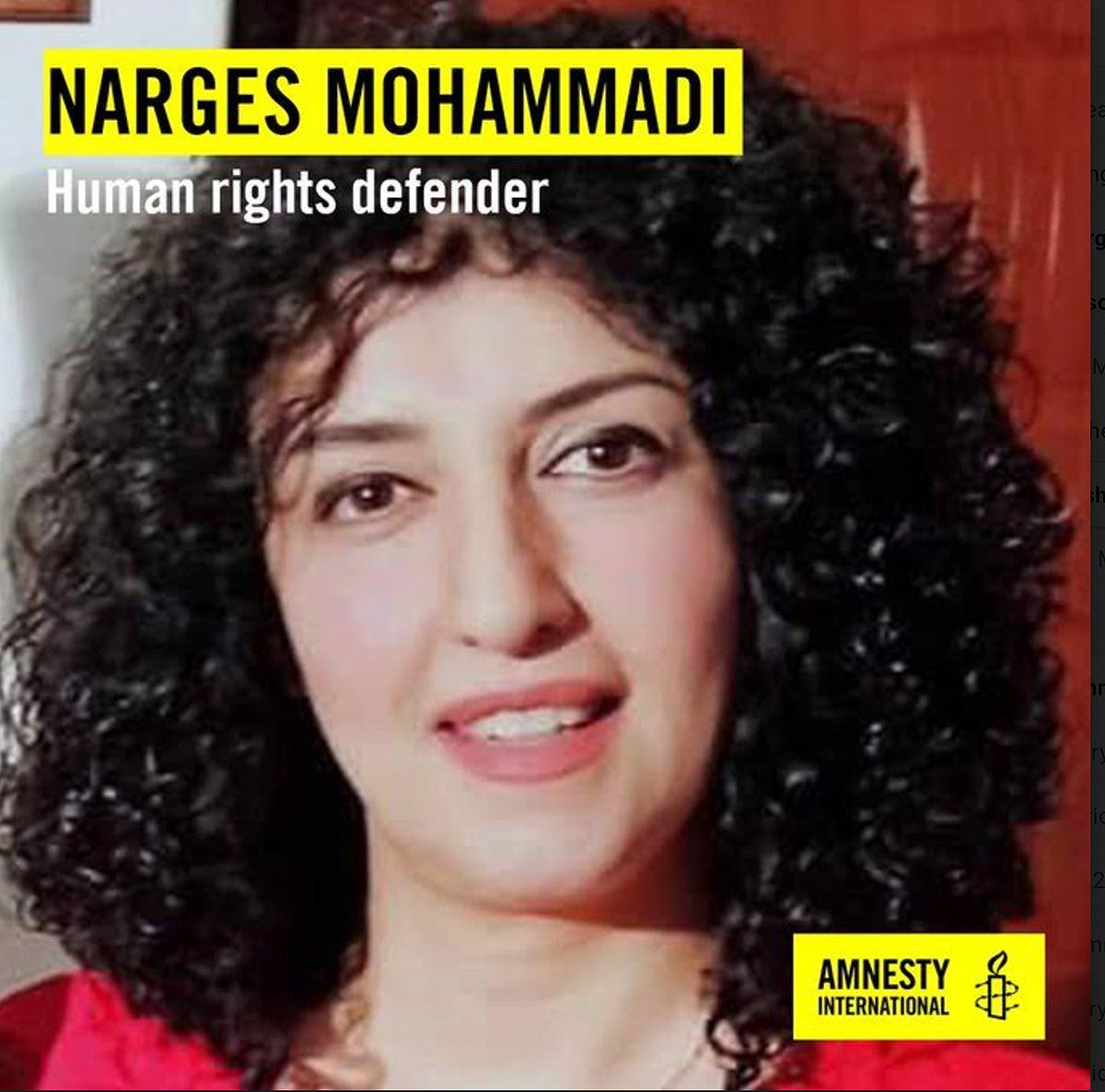 Charges had been issued against Mohammadi in September—a year after she'd finished serving a five-year prison sentence—in retaliation for her filing a complaint against Evin Prison Director Gholamresa Ziaei, according to the Center for Human Rights in Iran.  In February 2021, Mohammadi described in a video how she had been beaten by Ziaei himself for organizing a non-violent sit-in inside Evin against the brutal crackdown against anti-government demonstrations in November 2019.

Since being released from prison in October 2020, Mohammadi has been repeatedly harassed and assaulted by Islamic Republic (IRI) security forces, yet she has not backed down from her human rights advocacy, speaking out against unjust executions and spearheading a major lawsuit against the IRI’s widespread use of solitary confinement.   On November 16, 2021 she was detained while at a commemoration of a father of two who was shot and killed by IRI security forces who indiscriminately fired on protesters during the mass anti-government uprising that swept Iran in November 2019.

Rahmani, who is a political activist, journalist, writer and signatory to the Emergency Appeal to Free Iran’s Political Prisoners, told the IEC:

“Narges Mohammadi is a human rights activist who has been jailed and indicted many times. She is now in solitary confinement. She has been fighting to abolish the death penalty, to fight against the solitary confinement as implementation of white torture, to oppose the anti-woman laws of the Islamic Penal Codes and supporting trade unions and civil society organizations, and the right to take to the streets as a right of protest, amongst of other efforts, that the government of Iran condemns/considers these activities/efforts and rights as crimes."

“The violence against women in the Islamic Republic of Iran is limitless,” says Mariam Claren, also a signatory to the Emergency Appeal whose mother Nahid Taghavi (a German-Iranian dual national) has also been unjustly imprisoned since October 2020. “Narges Mohammadi is a human rights defender and a voice of the voiceless. Therefore, she is sentenced to 30 months in prison and 80 lashes. Lashes are a cruel and medieval punishment. She is now in solitary confinement. We should all raise our voices and demand her release.”

“Narges Mohammadi is a hero for repeatedly and courageously standing up against the Islamic Republic’s violent repression and countless injustices, risking her own life and freedom in the process,” states Dolly Veale, a spokesperson for the International Emergency Campaign to Free Iran’s Political Prisoners Now (IEC). “We join with Narges’ family, relatives and supporters of Iran’s many political prisoners, and legal and human rights organizations in denouncing Iran’s barbaric practice of flogging prisoners with whips or rods – a practice which could put Narges' health or even life in jeopardy – and in demanding that she be immediately and unconditionally released.”

"We also call on all who stand for justice to sign and urgently spread An Emergency Appeal: The Lives of Iran’s Political Prisoners Hang in the Balance – We Must ACT NOW! demanding freedom for all Iran's political prisoners."

This Appeal has been endorsed by over 3,000 people globally, including Cornel West, Noam Chomsky, Gloria Steinem, Ariel Dorfman, Jody Williams, Daniel Ellsberg, Judith Butler, and Raymond Lotta, and appeared as an ad on the back cover of the Summer issue of the New York Review of Books.