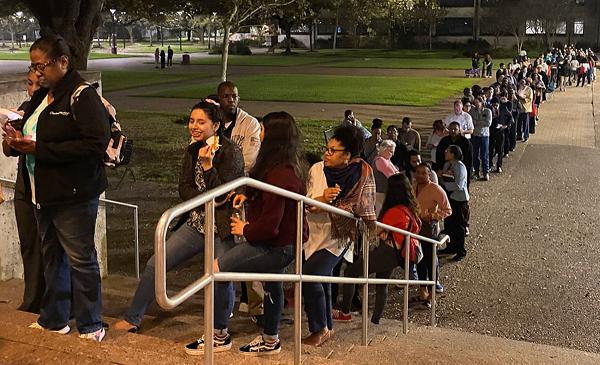 In 2021 the Texas legislature passed a law with new voting restrictions aimed at limiting the turnout in Harris County (where Houston is located) and preventing it from implementing measures developed to encourage voting. Here people wait in line at Texas Southern University, Houston, March 2020.    Photo: Allyn West

Florida: In late spring this year, 10 people—eight of them Black men—were arrested in Alachua County and charged with “illegal voting.” One wrote to a reporter that he and others were approached in the county jail by a Democratic Party election official, and told “that if we weren’t already convicted of our current crime then we were able to sign up and vote. They probably signed 65 or 70 people up that day, so I don’t understand how I can be charged with voter misconduct. All I was doing was what they told me I had a right to do.”

A few months later, Florida’s fascist governor Ron DeSantis, standing behind a sign reading “Election Integrity,” announced the arrests of 20 people—again, most of them Black—for “election fraud.” DeSantis sneered that the arrests were Florida’s “opening salvo”: “They’re going to pay the price…. This is just the first step; there’s many more in the pipeline.” As the Washington Post reported, “Those arrested had submitted voter registration applications that were processed by the state—a move that for many amounted to a green light that they were eligible.”

These arrests and threats were highly publicized in Florida. They are intended to maximize confusion and hang the threat of serious felony charges and prison time over people’s heads—even as state officials send voter registration applications to them. A 2020 study by the Sentencing Project estimated that “nearly 900,000 Floridians who have completed their sentences remain disenfranchised [unable to vote] despite a 2018 ballot referendum that promised to restore their voting rights.” The rate of disenfranchised Black people in Florida is 3.7 times higher than for “non-African Americans.”

Mississippi: In 1890, a convention to rewrite Mississippi’s constitution convened in Jackson. Of the 134 delegates, one was a Black man. A white man who supported voting rights for Black people, and had warned people that the convention would likely exclude Black people from voting, was murdered by six men shortly before the convention began—no one was ever charged or convicted of the killing.

The convention embedded white supremacy in its laws. It excluded people convicted of certain crimes from voting—crimes that the white supremacist lawmakers associated with Black people. The president of the convention shamelessly boasted, "Let's tell the truth … We came here to exclude the Negro."

Seventy-five years of outright Jim Crow, enforced by KKK, police, and mob terror, followed. This racist violence and an array of measures kept most Black people from registering, much less voting, and established and reinforced widespread disenfranchisement of Black people. By 1940, less than 1 percent of voting age Black people were registered in Mississippi; by 1960, several years into the Civil Rights Movement, “fewer than 10 percent of all African-Americans in Mississippi were registered to vote.”

In late August this year, a federal court upheld provisions of Mississippi’s 1890 constitution which continue to bar people convicted of many crimes from voting. It made the preposterous and chilling ruling that while it was clear that the state “was motivated by a desire to discriminate against blacks” when the constitution was written—“Mississippi has conclusively shown that any taint associated with [the 1890 constitution] has been cured”!!!

In 2017, Black people were 39 percent of Mississippi residents—but 62 percent of the state’s prisoners.

Georgia: Georgia was one of the most hotly contested states in the 2020 election. A new voting law aims to ensure that Georgia will vote Republi-fascist in future Presidential and most Congressional elections, and strip many Black people of fundamental rights.

Among the law’s provisions: new I.D. requirements; banning mobile voting centers (which were used only in Fulton County—Atlanta—where the population is about 42 percent Black); criminal charges for offering food or water to voters in line (in a state where in 2020, polling lines that took hours to get through formed in areas populated mainly by Black people); empowering the fascist-dominated legislature to suspend county election officials (given the hatred directed against the Black voting officials in Fulton County, home of the majority-Black city of Atlanta, it is not hard to figure out where this is going to be directed).

One of the most ominous features of the Georgia law is that it empowers any voter to challenge an unlimited number of other voters about their right to vote. Investigative journalist Greg Palast explained in an interview that he spoke to a "guy who actually dresses like a vigilante …. [He] wanders around in a cowboy hat and loaded six-shooter …. You’d think all this was just an old nut case … but he’s also chairman of the county Republican Party and a member of the Republican State Committee. He’s an important guy in Georgia Republican politics. He challenged 4,000 people.”

The “privatizing” and “crowdsourcing” is a leap towards a vigilante approach to voter repression. In one day of 2017, Brian Kemp, then the Georgia Secretary of State, purged 560,000 voters from the rolls. At least 107,000 of them were still eligible. Now this type of assault is put in the hands of would-be vigilantes who receive “hit lists” from a Texas-based fascist group called “True the Vote.” According to Palast, one woman alone has challenged 32,000 people in an Atlanta suburb, “overwhelmingly Black and young voters who could lose their vote.”

Texas: Texas’s state government has been thoroughly dominated by Christian Republi-fascists for decades. Since 2020, these fascists have been moving aggressively to undermine the vote of what the Houston Chronicle called “solidly blue” (i.e., with Democratic Party leadership) Harris County (Houston), the largest in the state.

In 2021 the Texas legislature passed a law with new voting restrictions aimed at limiting the turnout in Harris County and preventing it from implementing measures developed to encourage voting. These include banning overnight voting during the early voting period; banning drive-through voting; making it a felony to distribute mail-in ballots to residents even if they automatically qualify; mandating that caregivers who assist disabled people getting to the polls take a sworn oath. These measures have already had an impact. In primary elections this spring, 19 percent of the mail-in ballots in Harris County were rejected, compared to 0.3 percent in 2018.

Texas’s new law also empowers “poll watchers” to have “free movement” at the polling station, to “sit or stand near enough to see and hear the activity…” and to monitor the poll’s activity from opening to closing. This comes at a time when polling station workers across the country are being besieged by a stream of abuse, invective, and death threats from lunatic fascists on fire with the literally insane belief that the 2020 election was “stolen” from Trump. The elections administrator for rural Gillespie County and her two deputies resigned recently. The administrator said, “The threats against election officials and my election staff, dangerous misinformation, lack of full-time personnel for the elections office, unpaid compensation, and absurd legislation have completely changed the job I initially accepted. The life commitment I have given to this job is unsustainable.”

In the summer of 2021 a leaked video showed a Harris County precinct chair of the Republi-fascist party calling for an “election integrity brigade” of 10,000 suburban fascists to go into Black and Latino neighborhoods in Houston to monitor voting. The speaker said “We’ve got to get folks in these suburbs out here that have, you know, a lot of Republican folks that got to have the courage …” Pointing at a map of central Houston, he continued, “If we don’t do that, this fraud down in here … is really going to continue.” This May, the Harris County Republicans announced that they are launching “Election Rapid Response Teams” that are to be “regionally placed around the county and will be ready for dispatch at a moment’s notice.”