A Reflective Rant on This Capitalist-Imperialist System’s Glasgow Conference

How Many Children Did the “Glasgow Fiasco” Doom to Die? A Confrontation with Reality

—A Letter from Nayi Duniya 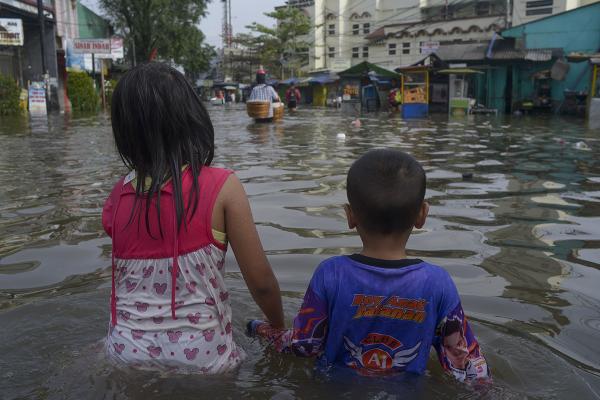 Inspired by the above:

If there ever was a moment for this system—the system of capitalism-imperialism—to be thrown off our backs, thrown off the backs of the 7+ billion of humanity, Glasgow demonstrated and concentrated this irrefutably (see here and here for what the Glasgow conference is). This was supposed to be the system’s big awaited answer to the existential crisis confronting humanity; and the system—and its rulers—came up with ABSOLUTE zilch, laying a giant fucking egg on the people of the planet—and the planet, the diversity of its ecosystems and its life.

The gap—or cognitive dissonance—between what humanity confronts with global warming, and where Glasgow is officially headed (as we go to press) is astounding—like being diagnosed with cancer and being prescribed Tylenol, as absurd as this is!

This would be funny—as a parade of squabbling and blundering fools—if it was not so tragic, so horrific in its implications! They have NO ANSWER to this crisis—and this was hammered home, nail-on-the-coffin style, and shame on us—the people of the world—if we don’t see, hear or learn the lesson! Let’s very briefly survey a mere sample of the tragedy that awaits humanity—which we ALL need to confront as a moral imperative at this moment:

Let’s just look, for example, at what it means for the people of a country like Pakistan, a “land on fire”… and for South Asia. Here is a vignette from Time magazine:

It’s just after 7 in the morning in the Pakistani city of Jacobabad, and donkey-cart driver Ahsan Khosoo is already drenched in sweat. For the past two hours, the 24-year-old laborer has been hauling jugs of drinking water to local residences. When the water invariably spills from the blue jerricans, it hits the pavement with an audible hiss and turns to steam. It’s hot, he agrees, but that’s not an excuse to stop. The heat will only increase as the day wears on, and what choice does he have? “Even if it were so hot as if the land were on fire, we would keep working.” He pauses to douse his head with a bucket of water.

Jacobabad may well be the hottest city in Pakistan, in Asia and possibly in the world. Khosoo shakes his head in resignation. “Climate change. It’s the problem of our area. Gradually the temperatures are rising, and next year it will increase even more.”

… the city had [already] reached a scorching 51.1°C (124°F). Similar temperatures in Sahiwal, in a neighboring province, combined with a power outage, had killed eight babies in a hospital ICU when the air-conditioning cut out. Summer in Sindh province is no joke. People die.1 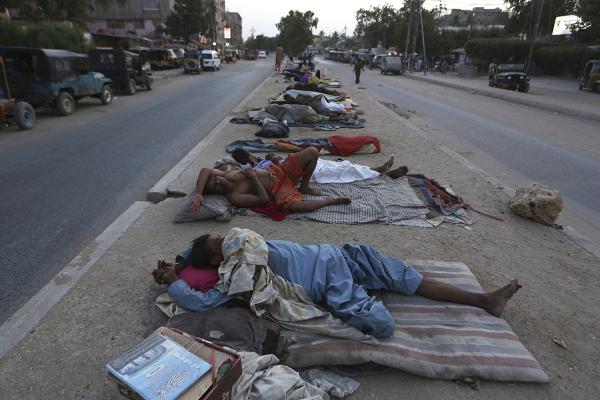 Because of relentless heat, Pakistani laborers sleep in the street.    Photo: AP

The air in situations like this is hard—if not impossible—to “breathe”… It hangs like a very heavy curtain, suffocating, and the extreme effort to actually breathe is taxing, especially difficult for those with any respiratory conditions.

This is going to be increasingly felt throughout many mega-cities of South Asia, from Dhaka to Delhi to Lahore… each with populations of tens and tens of millions, growing as people are driven from and flood in from the countryside by the workings of this system (see “The ‘Industrialization’ of Sexual Exploitation, Imperialist Globalization, and the Descent Into Hell,” by Raymond Lotta, section on “The Separation of Peasant Producers from the Means of Production.”)

Most of Pakistan’s population depends on the Indus River as a crucial lifeline—for fresh water, and for food as it is one of the main sources of irrigation for agriculture and crops. Nearly 75 percent of Pakistan’s 216 million people are settled on the banks of the Indus... and this is under threat of completely drying up, its source-glaciers melting as a result of global warming and “among the most vulnerable ‘water towers’ in the world.”2 The Indus valley is one of six cradles of world civilization, all centered on rivers—along with the Nile, the Tigris and Euphrates, and the Ganges.

The irony of the workings of this system: Pakistan contributes less than 1 percent of the world's greenhouse gases that has led to global warming. 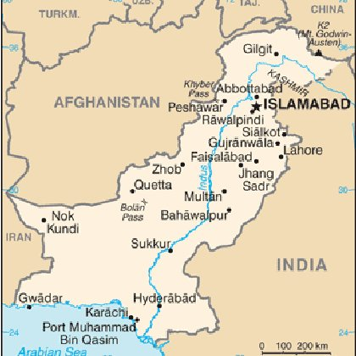 What does a world without fresh water look like? UNICEF has estimated that more than one-third of children globally are currently exposed to “water scarcity”—a euphemistic term for lack of fresh drinking water availability on a consistent or regular basis. Imagine, and take a pause, one in three children lacking drinking water! And this is going to worsen significantly with global warming and its consequent effects of “severity of droughts, water stress, seasonal and inter-annual variability, contamination—and demand and competition for water increases, resulting in depletion of available water resources.”3 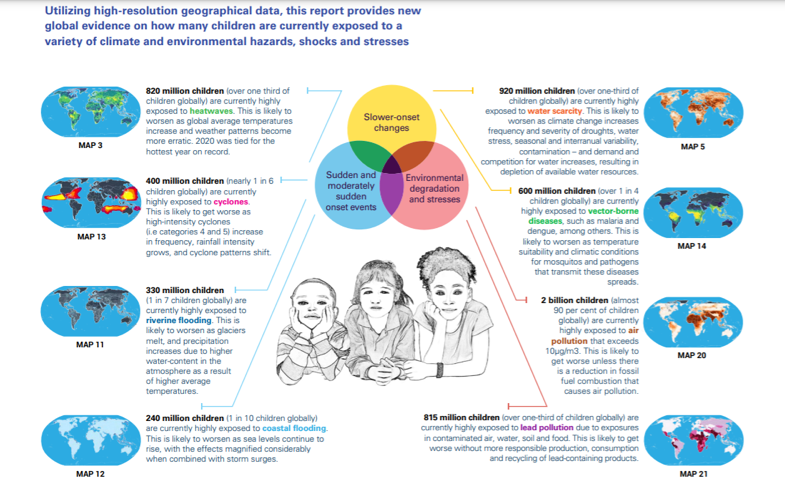 Let’s just look, for example, at what it means for the people of countries with vast coastlines, for example, Bangladesh. The range of people going to be displaced is almost certainly a minimum of 15 million people, and can go as high as 30 million Bangladeshis displaced from coastal areas, depending on sea level rise, some of the poorest people in the planet4… and this scale and scope adds and amplifies as you include Indonesia, the low-lying islands of the Pacific and Indian oceans….

Impact of sea level rise in Bangladesh.  Much of coastal Bangladesh is very close to sea level. Thus, sea level rise is expected to cause widespread flooding as climate continues to change. This low-lying area, vulnerable to flooding, is home to 18 million people.    Credit: Phillipe Rekacewicz, GRID Arendal

Compare this unfolding reality with what happened in Glasgow—where countries like the U.S. and China could not overcome their competitive differences to announce even obligatory or pro-forma “non-binding” targets for greenhouse gas emission reductions. As we go to press, “grand” pronouncements like in the last summit at Paris during the Obama presidency are relinquished in favor of small side agreements—on deforestation, on methane gas emissions and on coal production—but in sum, as we said earlier, this is a big ZILCH, a big fucking egg laid on humanity.

This is a time to ACT on what you do know—and to open your eyes and learn about what you don't know—about the unparalleled work that has been done by Bob Avakian on the source of this problem and the solution! 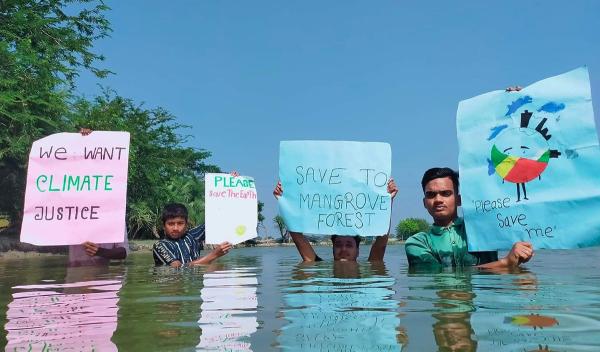 Underlying the Glasgow fiasco, fraud and failure are the dynamics and workings of the capitalist-imperialist system, for which the environment, the effects of global warming included, is an “externality” in the profit-calculus as different blocs of capital and nations compete for dominance and profit-accumulation (see here and here). Apologists for what is officially transpiring in Glasgow are so far relatively rare, given the absurdity of proceedings, but there are far too many apologists for the underlying system—this system of capitalism-imperialism—that is utterly outmoded!

This is a Rare Moment where revolution in the U.S. actually is possible, something that does not occur often, and will be a game-changer for humanity given the U.S.’s dominant position atop the world imperialist food-chain.

There is also a TREMENDOUS positive in that we have a whole different framework for a radically different system in the Constitution for the New Socialist Republic in North America, authored by Bob Avakian—economic, political and as a transition to a world without exploitation and oppression—that lays the foundation for a very different and conscious approach to society’s interaction with nature, of a framework to transform and struggle for that including wasteful consumption like in the wealthier imperialist countries, etc. The socialist system envisioned in Bob Avakian’s new communism comprehends the strengths and the weaknesses of past communist experience and theory for a whole new framework of human emancipation, including care-taking of the planet on a whole different basis than conceived before.

When one confronts a horrific situation like this—and the possibility of a solution, a “way out” it is morally unconscionable to turn away... For the far, far too many passive observers who should know better, at a moment like this, you need to delve into and get with this—for nothing less than the future of humanity is at stake!

WHY WOULD WE GO FOR ANYTHING LESS, for the 7 Billion+ of Humanity?

1. What It’s Like Living in One of the Hottest Cities on Earth—Where It May Soon Be Uninhabitable, by Aryn Baker, TIME, 9/12/19. Emphases ours. [back]

3. The climate crisis is a child rights crisis, UNICEF [back]