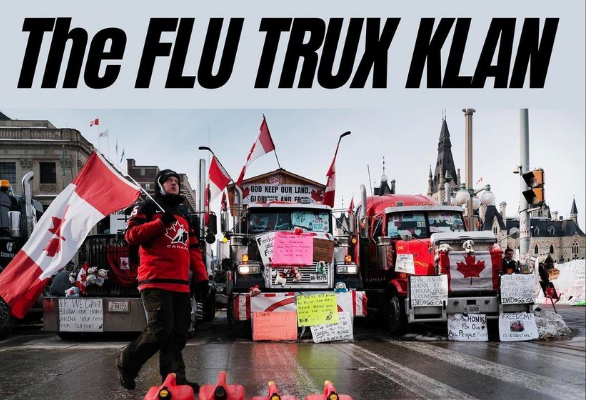 For the third weekend in a row, around 400 trucks, and (at peak) 8,000 people, occupied or took part in support demonstrations in the Canadian capital of Ottawa. And for seven days, about 500 miles away in Windsor, a few dozen trucks blocked and shut down the Ambassador Bridge between Canada and the U.S. (Detroit)—the busiest land crossing between the two countries. All this supposedly to protest a new policy requiring truckers crossing into Canada from the United States to either be fully vaccinated for COVID-19 or quarantine for two weeks.

But COVID restrictions are largely the pretense of this protest, although it is likely that many participants were drawn to it because they believe they have a god-given right to spread potentially deadly disease, and that we can “move beyond” COVID by ignoring it.

In reality, these demonstrations are a major initiative to launch Canada’s fascist movement onto the national stage and make it a magnet for a wide range of racists, Christian fascists, and misogynist and anti-LGBTQ groups and individuals, in much the same way that the anti-mask protests in U.S. state capitals in the spring of 2020 served to cohere and organize the fascist movement here.

NPR—citing Canadian security experts—reported that “groups with conspiratorial beliefs, anti-government and bigoted views have been trying for years to organize a convoy, but vaccine mandates helped to finally give their plan enough momentum in Ottawa.” And the New York Times reports that the main demand is actually “regime-change”—the dissolution of Parliament and the removal from office of Prime Minister Justin Trudeau. Early in the protests, Trudeau and his family were moved to an unknown secure location because of concern for their safety. (Trudeau is a moderate liberal in the Joe Biden vein, but to the fascists, as Donald Trump put it, he is a “far left lunatic.”)

Although for the most part U.S. media coverage has treated these protests as a good-natured street party by “jes folks” who are frustrated by COVID1 “like we all are,” the on-the-ground reality is quite different. A reporter for Global News (a major Canadian news organization) tweeted that “The protesters were jubilant, but they were seething and disrespectful too. A sizeable group of them—if not most—think their frustration gives them license to harass and intimidate anyone abiding by the public health that we as [a] society has set for ourselves.”

And there are possible indications of organized forces—including former Canadian military and police, as well as fascist forces from the U.S.—being integral to these demonstrations. The New York Times reported that “only a few of the self-proclaimed leaders are actually truckers. Some are, in fact, former police officers and army veterans who many believe have used their expertise to help organize the occupation. … The group’s proclaimed head of protective intelligence, Tom Quiggin, was an intelligence officer for the Canadian military, cabinet office and federal police. Another was a former police officer in Ottawa with the federal Emergency Response Team. ‘They know exactly what the tactics are that police are going to use,’ said [Professor Christian] Leuprecht, who studies national security, terrorism and international crime.”

Additionally, there are reports of funding and other aid coming from the U.S. and internationally. According to the Canadian Broadcasting Company, over half the donations to the “Truckers” GoFundMe account (before it was shut down) came from outside Canada, and 62 percent of that foreign money came from the U.S.

Probably even more valuable is the propaganda support from fascist media and “personalities.” Fox “News” anchors like Tucker Carlson and Sean Hannity have given heavy coverage to and cheered on the “Truckers,” as have other U.S. fascist figures like Lara Trump and Ben Shapiro. Podcaster and vaccine disinformation floodgate Joe Rogan hailed the “50,000 trucks … headed to Ottawa to protest vaccine mandates.” (The actual number was in the low hundreds.)

Most liberal media have downplayed the fascist character of this movement, but the reality is that protesters have carried Confederate flags, Trump hats and Nazi symbols; vandalized homes displaying LGBTQ Pride flags; harassed employees of an ice cream shop for wearing masks; harassed women at a homeless shelter to the point where they were afraid to go out of doors; and generally intimidated oppressed people in Ottawa.

On February 1, the government set up a “hotline” for people to report hate crimes connected to the demonstration. By February 6, it had gotten over 200 calls!

This active support from ex-police and military noted above complements what appears to be the incredible kid-gloves treatment of the demonstrators by on-duty police. The New York Times described cops as “almost invisible.” Even after Ottawa declared a “State of Emergency” on Monday, February 7, there were very few arrests and hardly even any tickets given. This gave the demonstrators time to get more and more organized, cohering their scattered forces into a more unified movement.

Only after the Ambassador Bridge had been shut down for six days—crippling the auto industry and other businesses on both sides of the border, to the tune of about $300 million per day—did the authorities cautiously and timidly begin to move to clear the blockade.2 (As we post this Sunday night, February 13, it is largely clear and expected to reopen to traffic soon.)

But even after clearing the bridge in Windsor, the Times reported that in Ottawa, the main center of the demonstrations, “police have done little to intervene” as thousands of demonstrators again took over the streets on Sunday. This has prompted righteous and much-needed counter-protests by thousands of residents, many of whom see the “Truckers’ protest” as “alt-right fascists at the core, with dangerous intentions.” Counter-protests have happened in other cities as well, including in Manitoba, in the more conservative west of Canada, using the hashtags #GoHomeFluTruxKlan and #GoHomeDipshits.

In Ottawa, things grew tense on Sunday, as “hundreds of local residents forming a human blockade,” courageously tried “to prevent more than 30 trucks from gaining access to the downtown core.”

However things turn out with this particular episode, we can expect that the fascist movement will continue to work aggressively to build on this. And their success so far has also “inspired” fascists in other countries to use the same tactic—a similar “Truckers’ Convoy” is now being organized to descend on Washington, DC, in March.

1. Or, in the case of fascist media like Fox “News,” openly and wildly supported them. [back]

2. Some people in the U.S. mistakenly believe that this police passivity is just how it is in Canada, which has a rep as being a gentler and kinder country. But Canada is an imperialist power, a close partner to the U.S., and like the U.S. founded on genocide of the Native peoples, who remain bitterly oppressed. Canadian activists and analysts have pointed out that “far more peaceful Indigenous demonstrations in recent years were met with overwhelming police aggression,” citing in particular Indigenous blockades defending traditional Wet’suwet’en territory in February 2020 that were broken up by the national police (the “Mounties”) using dogs, helicopters, tac teams and mass arrests. [back]