The Spread of Monkeypox:
Global Inequality and the Vicious Insanity of Imperialism

Last month the World Health Organization (WHO) declared monkeypox a global health emergency. And this week, the U.S. government finally declared monkeypox a health emergency. Cases of the extremely painful, contagious disease are rising around the world. It has spread to 85 countries. As of this writing there are more than 7,500 reported cases in the U.S., more than any other country outside of Africa, and the number of cases in the USA has increased 10-fold in less than a month. 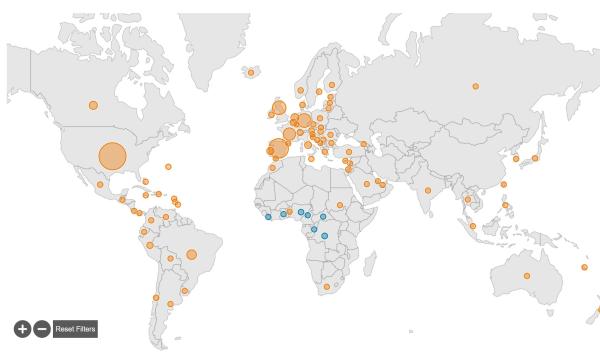 This did not have to go this way. There is a well-known vaccine—the smallpox vaccine—which in past years was held in massive stockpiles of millions of doses around the world—which also works on monkeypox. But for decades the disease existed almost exclusively in Africa, was not studied by scientists outside of Africa, and although the continent of Africa had thousands of cases and hundreds of deaths, got NO vaccines for monkeypox, and got none of the medicine to treat monkeypox. This is one more stark expression of the bitter reality that to the global system of capitalism-imperialism, the lives of people in Africa mean nothing. (Another stark expression: two years after the COVID vaccine was developed, less than 19.8% of the people in Africa are vaccinated for COVID.)

Monkeypox, which could have been contained in Africa, and its spread there greatly reduced, is now spreading all over the world. 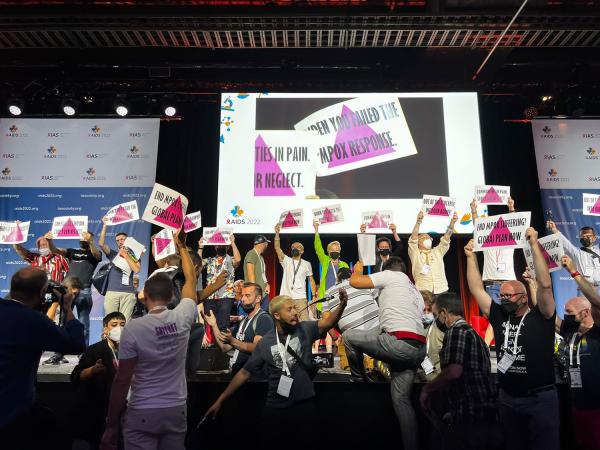 On Monday, August 1, a group of activists and advocates from across the world stormed the stage at the International AIDS Conference in Montreal, Canada during a special session on the global monkeypox outbreak, calling for immediate action from the World Health Organization (WHO) the United Nations (UN) and from U.S. government agencies including The Centers for Disease Control & Prevention (CDC) to stop the global spread of this disease.    Prep4All

Monkeypox is caused by a virus which is a very close relative of the smallpox virus, so close the same vaccines work for both. But monkeypox only kills about 1 percent of those it infects, and is not as contagious as diseases like COVID or the flu. While smallpox was one of the most deadly diseases known to humanity—300 million people died from it in the 20th century alone. Thirty percent of the people who got smallpox died.

Smallpox was completely wiped out by global public health campaigns by 19771. Massive stockpiles of the smallpox vaccine were kept for decades after, up to the present. These stockpiles, at one point many millions of doses, were not used to combat monkeypox in Africa, but instead were allowed to expire.

As far as we can find, there was never even a serious consideration of using these stockpiles to stop monkeypox in Africa. Joe Osmundson, a professor of microbiology, said on Democracy Now!:

The United States government let 28 million doses of the modern smallpox vaccine, JYNNEOS, expire and get binned from the national stockpile, as opposed to being used in the endemic regions, from Congo to Nigeria, where people commonly are getting monkeypox. I was on a webinar with the head of the Nigerian CDC, who laughed when I asked, “What countermeasures do you have? Do you have vaccine? Do you have treatment?” They have nothing2.

Monkeypox, which had been infecting people in the countryside in a number of African countries for decades, first made a leap into the cities in Africa and then made a further leap internationally, especially to the U.S. and Europe. Just why the disease made this leap when it did is not clear to scientists. But it is now spreading quickly. And further, it is mainly spreading among gay men, and largely through sex (the disease can spread in other ways, including through other kind of direct contact between people including infected utensils and bedding.) Monkeypox does not spread as easily as COVID, and can be stopped IF there is vaccine available. But the vaccines have not been available, not nearly enough to do what is required to stop the disease3.

Monkeypox has spread in the U.S. and Europe, without enough vaccines, and with difficult restrictions on medicine available for treatment and testing. The public health authorities have not moved with urgency and determination to solve these problems. Activists in the U.S. and internationally have demanded an emergency response. Further, the fact that this disease has been spreading among gay men (ninety-eight percent of the cases in the U.S. are among gay men, though anyone can get it, including from things like bedding, utensils) has opened up ugly attacks on gay people by fascist politicians, and further spread the poisonous political atmosphere of today.

What stands out through all this is the insane horror the capitalist-imperialist system is based on, and further intensifies every day it continues to exist.  The system is unable to provide medical care to people who need it most, even in rich countries like the U.S.  The sooner we put this system out of existence, the better.

3. Over the last decade the United States government let millions of doses of smallpox vaccine expire and be removed from the national stockpile. This was happening at a time in 2017 when monkeypox was spreading to more urban parts of Nigeria and was spreading through person-to-person contact. Health researchers say that availability of vaccines as well as contact tracing could have perhaps contained the spread and prevented the current global emergency. Rather than replace the expiring doses the U.S. chose to wait for development and approval of a freeze-dried vaccine with a longer shelf life. So as the disease began to spread inside the U.S., where there were only about 400,000 doses available. [back]